Shahadi Wright Joseph never set out to be a trailblazer. But prominent roles in Amazon Prime’s new terror anthology THEM and Jordan Peele’s horror flick Us, before it, have made her just that.

In both instances, Wright Joseph has been featured as one of four beautiful dark-skinned leads, and not by coincidence. THEM creator Little Marvin says he cast Wright Joseph and her mahogany-hued TV family, the Emorys, the way he did because no other small-screen offerings currently have a family that looks like them. Rather, previous TV series such as Family Matters have been the rare exception.

“Growing up, and I’m still young, I never really saw myself on-screen,” Wright Joseph tells TVLine. “Not with this type of representation. Which is a shame, but I’m glad that I represent others who look like me. That makes me feel better about it.”

Little Marvin says it makes him feel better, too. 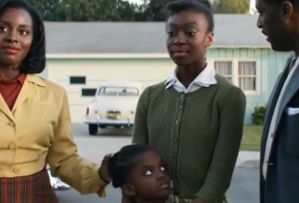 “I grew up as a fan of horror and we were never at the center of these stories. Especially not a beautiful chocolate family like this one,” he says. “Before anyone else gets involved, you make the show you need to see. And I needed to see a family that was complex and nuanced and human, but also dark-skinned.”

Rounding out the Emory brood are Top Boy‘s Ashley Thomas as patriarch Henry; Girls Trip‘s Deborah Ayorinde as matriarch Lucky; and Melody Hurd as Gracie, the youngest daughter. Little Marvin adds that seeing this quartet star as a family tormented by racist neighbors and racist ghosts in 1950s Compton moved him to tears at times.

“It was so deeply moving to me,” the EP reveals. “I would sit on set and have to put on sunglasses because I would start crying, watching this family overcome so much. There are all these examples on shows and in movies where dark-skinned parents are cast with light-skinned children. But like me, Ashley and Deborah were moved that we cast Shahadi and Melody because they look like they really could be their girls.” 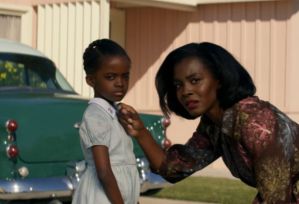 Ayorinde says that she became especially emotional when she saw THEM advertised in bright lights near her Los Angeles residence.

“Seeing the billboards out there for the first time, I broke down crying,” the London native recalls. “When I became an actress, I held on to my dream even though the people on TV didn’t look like me or if they did, I couldn’t relate to them.”

“But hopefully, I can be that for some other little girl or woman and the thought of that, makes me emotional, too,” she adds. “It feels like an out-of-body experience. Like, I’m my younger self looking at my older self on-screen, and that fills my heart up so much.”

Wright Joseph says she hopes people watch and learn what not to say to dark-skinned women. For instance, there is a scene where Ruby’s white classmate Doris (played by Sophie Guest) tells her that she’s “pretty for a colored girl.”

“That’s not a compliment,” a visibly annoyed Wright Joseph says. “Sadly, we do hear that all the time, and too many of us accept that. I’m hoping people see THEM and never say that to a pretty, dark-skinned Black girl ever again.”