Mothers really are the heart of the family, and matriarch Lucky Emory proved that and then some in the Season 1 finale for THEM.

First, she had to escape the asylum. And that’s just what Lucky did when she made quick work of the evil lady doctor who wanted to lobotomize her and the orderly who attempted to help. Before leaving, she also liberated another Black woman inmate and made meaningful eye contact with a Black security guard who let her know with just one look that her self-imposed decampment was fine by him.

Before Lucky could rescue her husband and daughters, they had to save themselves from racist neighbors Marty and Earl, who were attempting to lynch Henry because they thought he’d done something to Betty. 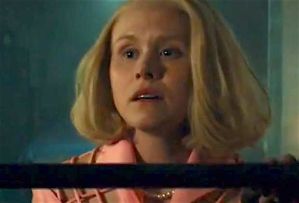 Of course, Betty’s fate got revealed in the finale opener with her attempting to escape George’s kidnapping hatch and George picking her off with a hunting rifle as she ran away. Wonder if this cold case will ever be solved? George’s disposal of Betty also means that we’ll never see Lucky best Betty, other than that epic slap in Episode 9, of course.

But back to the Emorys, who got away from their racist kidnappers when Ruby wielded her momma’s axe and took down Earl. Unable to get to Earl’s gun, Marty quickly ran up the stairs as Henry gave chase with Earl’s gun in his hand.

On the street, Henry shot Marty and beat him up with the gun. He even considered shooting Marty’s wife, who called him the N-word, but Ruby came outside and snapped him out of it. Ruby and her little sister Gracie then went back in the house, just in time for the house and the demonic spirit inside of it to turn on them and eventually their dad. 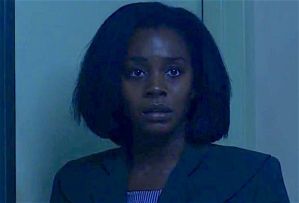 In order for Lucky to save her brood, she had to get past a mob of angry white neighbors who had gathered outside her home to yell obscenities and slurs at her as she walked up.

But Lucky wasn’t having it, and instead of swinging on them like she wanted to, she screamed until they were dumbstruck with silence. Lucky then marched up the steps into her house while a sea of flames sprouted up behind her. Time to take down the demonic and ghostly white man with the black hat and his evil minions.

Lucky saved Gracie from Miss Vera first, and Gracie even helped by ripping up the book. Boom! Racism in schools destroyed. Then Lucky saved Ruby from Doris the evil cheerleader and disfigurement. Bam! Goodbye, self-hate. Next up was Henry, who was participating in a little self-hatred of his own as Da Tap Dance Man showed him footage of Lucky being sexually assaulted while an insane and racist white woman killed their baby. Riddled with shame and guilt because he had taken the girls to the movies while the attack and murder took place, Henry sat and considered suicide. Thankfully, Lucky came in and let Henry know he wasn’t alone, and they could finally move  beyond the pain of the past. Voila! Black love lives.

That left just one final rescue: Lucky had to save herself and her family from the house’s demonic spirit once and for all. In order to do so, she released the pain and heartbreak of losing Baby Chester and confronted the demon by letting him know that she saw him for the broken man he was because he, too, had lost a child. Man, the words “I see you” have never sounded and felt so good. Thank you, Queen Lucky. Thank you.

Give the THEM finale a grade in our poll, and then hit the comments to share your thoughts.