Jordan Calloway describes himself as both a comic book nerd and an action-flick aficionado. So, to say that he was born to play Black Lightning‘s Painkiller is an understatement.

Calloway will reprise his dual roles tonight at 9/8c on The CW, in a highly anticipated backdoor pilot for a potential Painkiller spinoff. As he did in the original series, he’ll play both Khalil and Painkiller — and try to do the right thing as both personalities fight for dominance within. Creator and executive producer Salim Akil penned the episode, which also includes an appearance from Anissa (Nafessa Williams) and Grace (Chantal Thuy).

“I grew up watching Jean-Claude Van Damme, Arnold Schwarzenegger, Sylvester Stallone and Michael Jai White,” Calloway tells TVLine. “Jean-Claude is my favorite of the three. Come on now, Kickboxer, Bloodsport. All of that. This is why I’m living my dream. Because I grew watching these movies as a kid, I’m excited about giving that same energy to the next generation. They want to see their heroes doing the stuff that makes them heroes.”

As for playing two different characters with drastically different philosophies, Calloway is up for the challenge — if the show gets picked up to series, of course.

“Both characters are a blast to play, and it’s challenging,” he professes. “You get to play two different characters but you also get to tell two different stories. We usually look at storytelling with a protagonist and an antagonist. But now, I get to find the protagonist in each character because each one of them will consider themselves to be right. And rightly so, because they both have a level of truth but flaws as well. That’s what makes it good entertainment, that drama.” 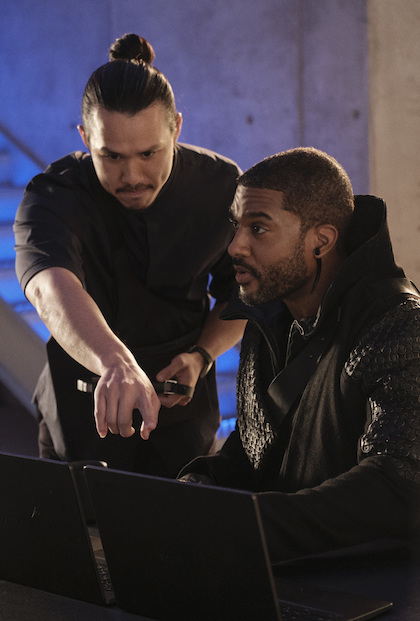 In this week’s episode, Black Lightning fans will get to see what Khalil has been up to since he left Freeland and relocated to Akashic Valley. Splashy and tech-driven, Khalil’s new home is full of the big lights and glamour Freeland lacks. Bigger and flashier, however, also means an enhanced level of cybercrime and cybercriminals. But Khalil has help thanks to his friend Philky (played by Insecure‘s Alexander Hodge), who uses his tech skills to help Khalil/Painkiller while moonlighting inconspicuously as a barkeep. Philky also has a dark past that includes alcoholism and homelessness in Gotham.

Khalil/Painkiller also has the help of a character named Cousin Donald (The Night Shift‘s James Roch). A medic and a Marine, Cousin Donald wears futuristic earrings and head-to-toe leather and has a duality that helps him better understand and relate to Khalil than most. There’s also Maya (Lost in Space‘s Sibongile Mlambo), a strikingly attractive but menacing natural leader who expects results at all costs. Will Maya be a friend or foe? Fans will soon find out.

Calloway says he’s excited for fans to see all the ways a Painkiller series would differ from Black Lightning, not just aesthetically but tonally and stylistically.

“It’s a completely different tone from Black Lightning, which is what made me extremely excited about it too,” he says. “We’re showcasing other cultures and other types of people, which I think is a blast. It feels good to showcase that for other audience members and to be that draw for them as well. In the pilot, Philky tells Khalil he’s not an Asian tech sidekick and that was right on time. But the ladies will also love seeing Asian Bae. Even my sister was like, ‘Slip me his number.’ And I was like, ‘You’re married. What is going on?'”

Khalil and Painkiller also have different fighting styles, he explains. 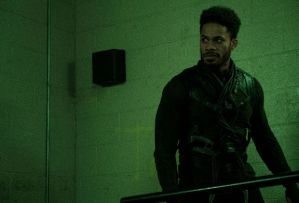 “It was fun figuring out who’s the tactician and who is more of a brawler?” says Calloway.  “And it’s finding those different nuances just within that helps set both shows apart. When it comes to action sequences, we have the ability to be more brutal in certain areas and incorporate more martial arts in others. It’s been a lot of fun, and the stunt team is amazing. They keep throwing different stuff at me and that has to do with the writing as well. I love it.”

Without revealing too much, there’s even a scene in Episode 7 where Khalil/Painkiller takes on at least 20 bad guys. Although that’s a lot of fighting, Calloway says he’s prepared, should such sequences be a regular occurrence.

“I hope I get to take on 20 people every week,” Calloway says, fearlessly. “For me, the physicality of it is just another aspect of my acting. You have to give credit to Wolf Stunts, Danny Le Boyer, David Conk, my stunt doubles and all of the time and effort that we put into training and learning. I’ve grown to have an appreciation for the stunt work and stunt performers and all of the work that they put into the fight choreography that we do.” 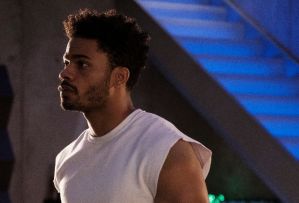 “We were training for that huge fight sequence, which they cut down because there was even more where we were fighting on the stairs,” he adds. “We trained for that over the course of three days. Salim was sick but he just rallied and I’m so proud of him and the crew and the actors. That scene was shot on the second or third day when he was down and he could only direct from quarantine. Bille Woodruff stepped in and we called an audible that night.”

But the behind-the-scenes challenges make the end product that much sweeter, the actor says.

“That’s one of the reasons I’m just so proud of everybody, because the product that you’re going to see doesn’t scratch the surface of all that was going on behind the cameras,” Calloway concludes. “It was really cool to be a part of something cool like this and it reminded me of when I did Lion King as a kid at the Pantages the day after 9/11. Those types of experiences helped to prepare me for what I’m doing today.”