The more Beth Boland wants out, the deeper she gets pulled in.

With Dean still behind bars and the Secret Service breathing down her neck, Sunday’s episode of Good Girls plunged Beth even deeper into the criminal world as she — forcibly — took on the mysterious role of “the banker.” Will this woman ever catch a break? Let’s be real: Probably not.

Elsewhere in the episode, Annie took on a new guise, too, as she vied to become Babysitter of the Year. (Yeah, that didn’t end well either.) Let’s recap the whole shebang from the top, shall we?

After placing a tracker on Rio’s car, agents Phoebe and Dave wire Beth up so they can listen to her next exchange with the crime boss. When he fails to show to their scheduled meeting, Beth goes into panic-mode, worrying that Rio might be on to them. “I at least want my husband out!” she screams. Dave refuses. Not until they know where the money goes, he says.

When Nancy’s in a bind, Annie offers to babysit Dakota. If only Nance knew where her baby would end up… but more on that in a sec.

Ruby hits the club to bring Stan some chimichurri sauce (odd, but OK), and finds he’s MIA. She calls him to say she’s dropping it off, and catches him in a lie when he tells her he already ate. Little does he know, Ruby’s watching his co-worker scarf down his meatloaf. Stan’s actually on a run with his boss, and as he talks, we see a man gagged and tied up in his backseat.

Rio finally visits Beth and when she asks him where he was, he shushes her and unbuttons her blouse. This ain’t no booty call though, and luckily for Beth, she’s wire free… this time. She takes off her bra, and he motions for her to keep stripping. She does. He places the tracker he found on her table and tells her to watch her back. Her hunch was right: He knows something’s up.

Mick visits the ladies and tells Beth to get in his car. When Beth says she can’t go with him because of the baby, he pays it no mind. (Surprisingly, he’s very good with babies! Who would’ve thought?) As he quickly installs the car seat in his truck, Ruby asks the ladies, “You all realize we’re using a baby as a human shield?” Oh, we know. 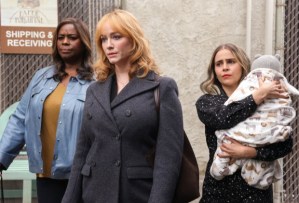 They arrive at a mystery location, and Mick gives Beth a bag and a gun. “You’re the banker,” he tells her. Beth follows him behind a shady, graffiti-tagged door into a dark warehouse. She nervously walks through the dark aisles as a mystery man loads a clip in another room. She enters an office and finds a jovial-looking older gent.

Beth returns to the car with a bag full of cash, but this isn’t their only errand for the day. “The banker” hits multiple stops, collecting cash at each location. Her confidence snowballs until she meets a feisty young woman whose sick mom isn’t around. The woman, who seems down on her luck, has no idea what Beth’s talking about, but when Beth returns to the car, she tells Mick, “It’s all there.” Is it, though?

Ruby rummages through Stan’s stuff looking for evidence of infidelity, and finds keys to a car she doesn’t recognize. She checks the trunk and finds designer handbags. Ruby confronts her husband, which leads Stan to drop a massive truth bomb. “You can’t just take from a guy like him,” he says, admitting he’s still paying off her debt to Gene.

Beth returns to visit the woman she wasn’t able to shake down and places a gun on the table. She tells her to watch her back, giving her a heads-up that someone else will likely be coming to collect. And soon.

When Nancy picks up Dakota, she freaks when she sees the baby has a diaper rash. She says it was her own fault for leaving “a child with a child,” but what she really meant to say was, “Thank you, Annie, for helping me out of a jam today!” It can be hard to sympathize with Annie when so much of her struggle stems from her own doing, but it’s a bummer seeing her get kicked while she’s down and trying to do good.

At a restaurant, Beth watches Phoebe and Dave walk in the door, just as Rio jumps into the booth across from her. He asks if she has something to tell him, but she declines, saying she’s glad her banker side-gig is over. “Oh darling, we’re just getting started,” he says. It’s time for him to lay low and while he does, Beth’s going to be the new face of the operation.

Rio then reveals that he also answers to people and “they’re gonna want to meet you.” He exits, and Beth turns to the booth behind her, where Dave and Phoebe are sitting. “He’s got a boss!” she says with a smile. With that, Dean finally gets sprung from jail.

When will Beth meet the real boss, and will her new role as the banker help her level up in the world of crime? Drop some comments below!