Warning: The following contains spoilers for Sunday’s midseason premiere of Fear the Walking Dead. If you’d rather watch first, read later, off ya go.

Was irony ever crueler than in Sunday’s midseason premiere of Fear the Walking Dead? John spent the bulk of the episode alternating between expressing his death wish and planning his suicide (right down to Scrabble tiles that spelled out, “Goodbye, June”). Then, when said wish was granted, albeit not at all in the way that he — or we — could’ve anticipated, he had a change of heart. How did Garret Dillahunt’s sharpshooter go down? Read on — and weep.

‘IF IT’S TROUBLE YOU WANT, I GOT SOME FOR YA’ | A couple of weeks after John left June, he bumped into Morgan and Dakota at the convenience store from which he still rented VHS tapes. Though the old pals were happy to see one another, John refused Morgan’s invitation to be a part of the utopia that he was building in a dry river bed. After Virginia walkie-talkie’d, threatening Grace and all of their friends, John also refused Morgan’s request to join in the fight against the Rangers. He had, as aforementioned, other plans. But at least he would use his pickup to help get Morgan and Dakota past the walkers held back by a barricade on the bridge that was the only way north.

It wasn’t easy, of course. Sure, after a Ranger shot up the first truck before being dispatched by a reluctant John to save Morgan, Dorie just happened to have a second truck sitting around. But it needed parts. While he and Dakota went to the cabin next door to scavenge, Morgan found John’s telltale tiles and, as fast as he could, confronted his buddy. “I just want it to be over,” John said. Later, after Morgan got truck No. 2 running, he continued trying to talk John out of his suicide mission by showing him the note that had been left with him by whoever had saved him following Season 5’s finale. Still no dice. John was a dead man talking. 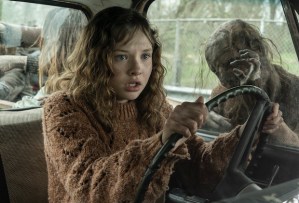 ‘OH MY GOD, YOU KILLED CAMERON’ | By the hardest, the trio managed to get past the walkers. (Particularly gnarly was the zombie that, for a while, got stuck beneath a spinning tire. Nightmare fuel, that!) But the truck was worse for wear after Dakota crashed it to shake off a couple of especially clingy walkers. Before Morgan set off to look for parts (I presume?), he repeated his, “Dude, you can’t kill yourself” argument some more and gave John a photo of him with his dad that he’d found in the truck they’d been going to fix up themselves once upon a time. When even that significant prop didn’t dissuade John from his plans, Morgan walkie’d Virginia and gave her the location of his friend’s cabin to hold a meeting. Now, Morgan said, John couldn’t go back there and kill himself. (Although technically, Morgan, couldn’t John just have done the deed right then and there?)

While Morgan was off somewhere, Dakota was grabbed by a walker that wasn’t quite dead, and stabbed it with — aha! The broken knife that had been used to kill Cameron. Yes, she’d done it, she admitted to John. Cameron had discovered how she was getting in and out of Lawton and blabbed to Ginny. So the girl had killed him? All the cool kids are doing it, she replied (basically). “Morgan said I need a reason to live — maybe that’s you,” John decided. “That’d have meaning.” Taking a hard pass, Dakota shot John in the chest and pushed him into the river below. Death, she remarked, “doesn’t always have to mean something.” 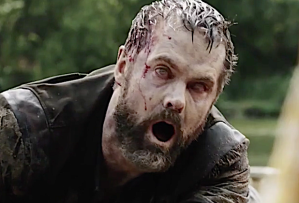 ‘WHAT DID YOU DO?!?’ | After John floated to the bottom of the river in especially artistic fashion, he found — what are the odds? — the photo of him and his dad, which in turn gave him back the will to live. So he swam back up to the surface, pulled a Leonardo DiCaprio (with no Kate Winslet to take up all the room on his floaty) and went bobbing down the river — to safety, I presumed. Having heard the shot, Morgan demanded to know what Dakota had done. She not only told him, she inadvertently revealed that she had killed Cameron, too, since she was still holding the telltale knife. But regardless, he was going to take her to his new paradise, she insisted, because she was the reason he was alive. Come again?

All this time, I’d thought Sherry had patched up Morgan at the Gulch after Virginia had shot him. But it had been Dakota. She’d followed her sister there, eager to see her go down. Now, she screamed at Morgan, “You are breathing because you are the only person left that can end her!” Heavy. Meanwhile, Ginny arrived at the cabin with June and some Rangers. Mid-hissy fit over Morgan being a no-show, the villainess was walkie’d by her nemesis and told to keep an eye out for John floating downriver. Help him, then they’d talk. Following that call, Morgan rang Dwight at the new compound and told him to get everybody ready; he might be bringing the war with the Rangers to their doorstep. Oh, and bring in Sherry, Morgan added. They were gonna need the help. Finally, June spotted John on shore… face down. When at last he looked up at her… aw, crap. He had turned! He reached for her, as walkers are wont to do, and for a last moment, she held her husband’s hand before being forced to stab him in the head.

Still in shock that the show killed poor, sweet John? Join the club. And while you’re at it, hit the comments with your reaction to this brutal twist after grading the midseason premiere in the poll below.