Becky’s sobriety journey took an unfortunate detour during the March 31 episode of The Conners, when the single mother allowed herself a glass of wine at dinner with an old friend. That slip resulted in a full-blown relapse, which occurred midway through Wednesday’s dramatic two-parter.

Asked to explain why Becky fell off the wagon, showrunner Bruce Helford tells TVLine, “When she was going through her original drinking problem on the show, she stopped [because] she was pregnant. After the baby was born, she stopped nursing and could conceivably drink again [but she didn’t]. And we thought we may have done a little bit of a disservice making it look so easy that someone could stop cold turkey.

“It isn’t so easy to [quit drinking] for most people, and our show is always trying to be a touchstone of reality in a world of sitcoms that often is not,” Helford continues. “She would definitely come up against this problem again.”

This time around, Becky will seek professional help to overcome her addiction. “She’s going into rehab,” Helford confirms. “We’re dealing with it a bit more realistically… There are a few episodes [that cover] her journey. We definitely see the process that she goes through.” 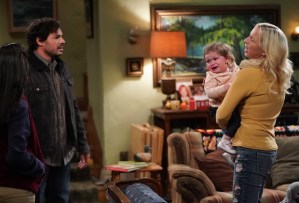 Meanwhile, Helford hopes to explore the impact Becky’s relapse has on her baby daddy Emilio in a potential fourth season. Speaking of which, where exactly do things stand in terms of a renewal?

“It’s being discussed,” Helford shares, adding, “I think we do well [in the ratings]. When you get the DVR numbers, the audience is very loyal to us…. And we all love this so much, so the will on our side is certainly there.”

As for whether the Season 3 finale could serve as a makeshift series finale in the event the show does not come back, Helford admits, “It’s a very satisfying end of a season, I’ll put it that way. I don’t know if I would consider it an end of a series. But it’s definitely going to be a very satisfying end-of-season show for the audience.”