Warning: This post contains spoilers from Friday’s The Falcon and the Winter Soldier. Read at your own risk.

On The Falcon and the Winter Soldier, the Flag Smashers — led by Karli (Erin Kellyman) — are fighting for a just cause.

Billions of people came together in the immediate aftermath of the Blip, and many of those left behind found themselves homeless and displaced when the missing finally returned. Although the group has resorted to extreme tactics (like bombing a Global Repatriation Council office), Kellyman says they’re motivated by a desire to restore a sense of community.

“The people who remained kind of came together and supported each other lot more because of the traumatic event — half of the population disappearing — and the borders were open, and people came together, and there was more unity,” she tells TVLine. “That’s what she’s trying to replicate that again, but with everybody this time.”

However, the lengths that the Flag Smashers are willing to go to complete their mission raises philosophical questions about whether or not the end justifies their means. Are they still creating good in the world if they’re willing to kill those who stand in their way? And as Zemo pointed out in this week’s episode, creating their own army from the Super Soldier serum makes them supremacists just like the Nazis, and on a dangerous path where they will not stop unless someone forces them to.

But it may not have always been like this. For Kellyman, the Flag Smashers probably first used the serum for an entirely different purpose which has now been warped as they continue to expand.

“I think the reason that they wanted the power behind them, originally, was probably for a more practical use. They do a lot of moving boxes and helping people, and I think they probably would have just taken it for that reason. Now they’re starting to get more attention, and they’re posing more of a threat, and I think [the serum] is quite helpful,” Kellyman explains. 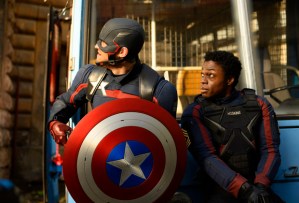 Karli’s mission to make things the way they were before the Blip puts her in direct opposition of the new Captain America, John Walker.

“She thinks that she’s fighting for the people that go unheard and unseen, the displaced people, so she’s against what he’s fighting for,” Kellyman adds. “But also, he’s not her main focus. She has bigger priorities, and I think the main one is making sure that everybody that’s been affected by the Blip is safe and in warm places and have medical supplies and food to eat.”

However, her priorities may soon shift. Episode 4 also saw Walker snap and use Cap’s shield to bludgeon to death one of the Flag Smashers, after his partner Lemar Hoskins aka Battlestar was killed by Karli during a melee. Now that he’s out for blood, Karli will probably need to start paying closer attention to the star-spangled veteran.