The following contains spoilers from the Syfy finale of Wynonna Earp.

After four years of protecting Purgatory with her Peacemaker, Wynonna Earp got to quite literally ride off into the sunset. And she did so while straddling a motorcycle, with Doc Holliday seated behind her.

Mind you, the two almost didn’t wind up together. Following the simply beautiful “WayHaught” wedding, Doc (played by Tim Rozon) was determined to put Purgatory in Charlene’s rear view mirror and get to living life as “just a man,” and Wynonna (Melanie Scrofano) felt compelled to stay put as Purgatory’s protector. But with an empowering nudge from li’l sis Waverly (Dominique Provost-Chalkley), Wynonna caught up to her man and professed her love, after which they decided to travel light, for the first time in a long time, and pay their daughter Alice a visit in MIracles, Montana.

TVLine spoke with series creator Emily Andras about crafting this very fine finale, at least one “happy accident” that wound up stirring many emotions, and more.

TVLINE | The finale has just aired…. What emotions do you hope the fans are feeling at this moment?
Just head-to-toe body warmth, and love, and affection, and wistfulness…. And a little bit of bittersweetness. I feel like joy has to be paired with nostalgia, so I hope they’re feeling all the things. But hopefully not hungover! 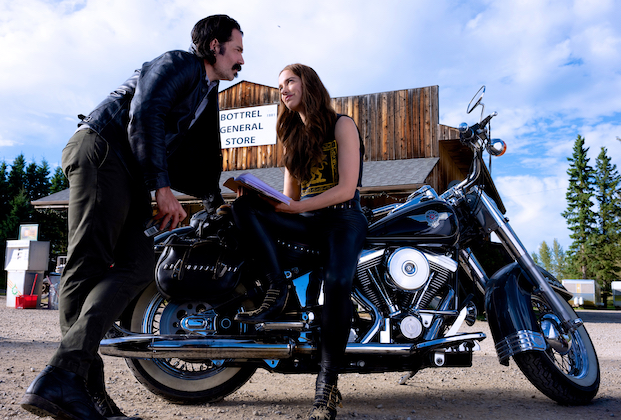 TVLINE | At what point over the years did you ever envision Wynonna and Doc riding off into the sunset?
Ahhh! I almost never even let myself envision it, you know? It’s so funny —  when you start doing a show, you have all sorts of ideas about what pairings are going to rise to the top, who’s going to end up with whom, and one of the joys of Earp is that so many different things have happened. But those two characters have certainly earned the chance to try to be happy, whatever that means to them. I never knew that I would be allowed to end such a romantic pairing with the woman driving the motorcycle and the guy on the back.

TVLINE | I’m watching that final sequence and it almost feels alien, seeing the two of them head off into what I think of as “the real world.” But I also found that viscerally exciting, to see so much ahead for them.
That’s so lovely, thank you for saying that. I feel like having the world ahead of them and being such an unusual couple, I would love to see what happens next for them. I’m sure there will be lots of crazy sex and crazy arguments and crazy laughter. So, godspeed! Godspeed. 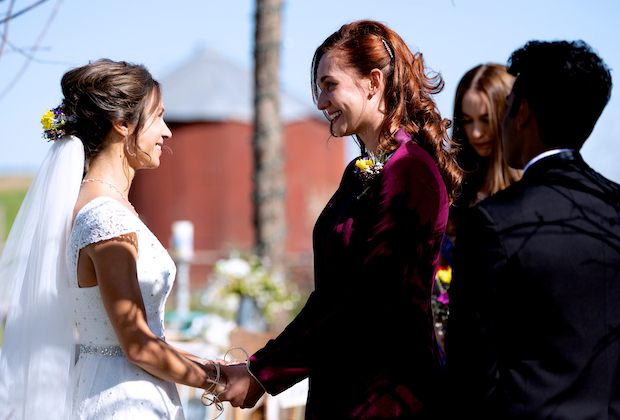 TVLINE | When throwing a season-ending wedding, what is Emily Andras’ marching order? “Above all else, this wedding has to be…”?
It has to honor to all of the characters — and by that, I mean it has to try to find a moment for every special pairing on the show, not just WayHaught. I think it’s important to pay due respect to how far Waverly and Doc have come; she never gave up on him, she always saw a better man in him — and now he gets to be the best man! Nedley (Greg Lawson) and Nicole’s (Kat Barrell) relationship, that paternal/daughter bond is so special, so honoring that was very important.

And at the end of the day, I still think the real love affair of the show is the Earp sisters, so I ended to make sure that that was honored. I really love the parallel with the pilot, where Wynonna came into town against her will and was so hungry to leave but was forced to stay. And now you have Waverly secure enough in how their relationship has evolved, that she knows Wynonna deserves to leave again — because she’ll come back.

More than anything, it was about giving every character a moment of happiness. Even Jeremy (Varun Saranga) becoming deputy chief of Black Badge and maybe finding a new date…. It was all about finding everyone a moment of potential joy, after they’ve gone through so much after four seasons. 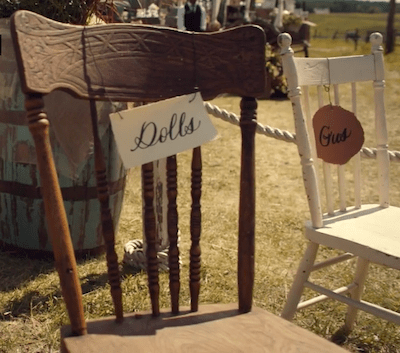 TVLINE | Talk about the decision to have empty guest chairs laid out with the names of those who are no longer with us or didn’t make it to the wedding.
That was such a happy accident. We were on-set, it was very much in the middle of the pandemic, and we knew we were going to have a limited number of people for the wedding. But then we put out chairs so you could understand where the aisle was, and they looked really empty. So my incredible director, Paolo Barzman, who also did the pilot, and my art director Trevor Smith, pitched this idea to me. I had sort of joked about, “Wouldn’t it be cool if you had the ghosts of characters past?” In the moment, they said, “What if we hung names on the chairs?” and it was just one of those goosebump moments, like, “That’s brilliant.” So then we have people writing up these cards, rushing them out, and it’s honestly one of my favorite things. Whenever I see that Dolls chair, I just can’t help but feel things.

TVLINE | But Mercedes (Dani Kind), to be clear, is still with us. She’s just out, like, being her best vampire self.
She’s out being an amazing vampire, yeah. I still have that spinoff if you want to help me sell that! 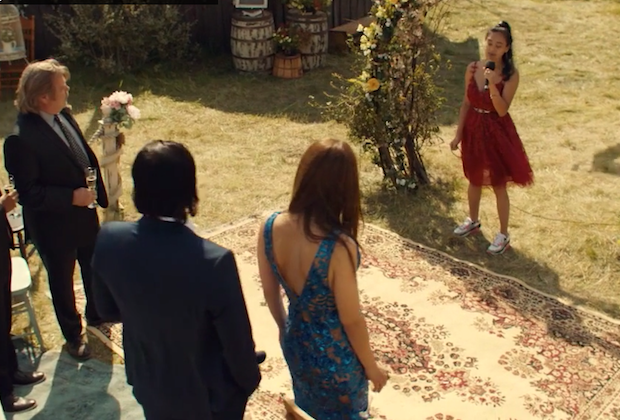 TVLINE | If anything caught me a bit off-guard, it was us getting a song from Rachel (played by Martina Ortiz-Luis).
The thing about Martina is that she is a phenomenal singer. She is the anthem singer for the Toronto Maple Leafs — so she’s quite a star here! — and she was on Pilipinas Got Talent back in the day…. It seemed like a waste to not have someone with such an exceptional voice perform! And what better song to lay over the necessary wedding montage than a WayHaught classic (Fleurie’s “Wildwood”), the song that was playing the first time WayHaught kissed. It’s a bit of an Easter egg for those hardcore WayHaughters!

TVLINE | I don’t think anyone would have ever felt like a “Dark Angel Waverly” detour was missing, if you hadn’t spent time on it the episode prior. Why did you feel it was important to go there during one of the final hours?
The truth of it is that honestly we’ve been balancing the spectre of whether we were going to have a Season 5 or not. When we started breaking Season 4 two years ago, we were looking down the barrel of about 24 episodes, so [when you get half that] you’re like, “What are we going to keep, and what are we going to pitch overboard? What can we live without learning about?” I would argue that this idea of Waverly having a darkness inside of her did have to be highlighted after four seasons. I completely agree that in a perfect world I could have done eight episodes of Dark Angel Waverly, exploring that and seeing it come to pass. But if we ever get more story, I don’t know if Waverly has complete control over that part of herself. I dont think it’s “gone.” If Nicole puts mayo instead of mustard on her sandwich, who knows what’s going to sprout out!

TVLINE | I mean, if only to see what other outfits Dark Waverly has.
As long as she keeps her thigh holster, she’s ready to go. 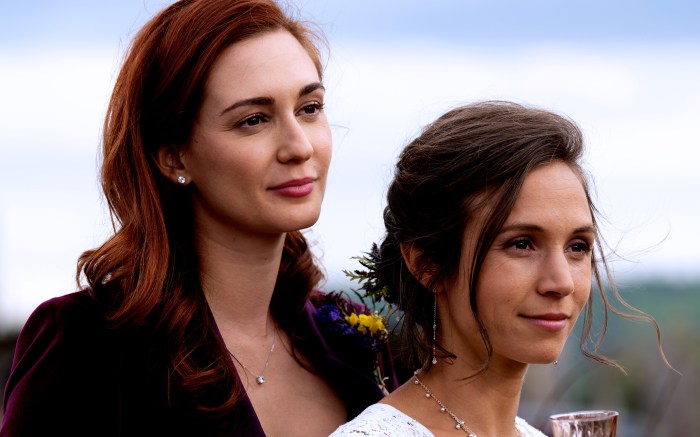 TVLINE | Looking back at these last few episodes, what are you most proud of?
‘m so proud of this cast. It’s so boring, but God, just to see them grow and thrive and shine…. performing comedy and emotion, seeing their commitment to the show, and the feelings…. It’s just been such a joy to see such an amazing group of people get their due. They really are that wonderful, off-screen as well.

I’m also pretty happy — in this day and age, and despite all the fights the show has been through — that if this is the end, I feel like that’s a pretty nice finale, a pretty good topper on the cake. I feel like the fans will feel like they went on a journey, and they left the characters in an interesting, good place. And look, that’s really rare in TV, to end your story the way you want. How can I be anything but grateful, at the end of the day?

TVLINE | When I was writing my tweet the other morning, I wanted to call it a “very fine finale,” but I worried you’d think I was saying it was only “fine.” But it was a very fine finale!
No, you have to keep me hungry! You get to challenge me, Matt. Listen, I just didn’t want to risk…. I’m the queen of 75 cliffhangers, but I feel like the fans have worked so hard for us, for so many years, that it was more important that they got closure, just in case. But there’s always another demon, there’s always another thing to trigger Dark Angel Waverly. There’s always more story, but at least you have this, no matter what.

TVLINE | And if some network or streamer does ride to the rescue, would there be something that brings Wynonna and Doc back to Purgatory? Or might a Season 5 be without the two of them?
Look, the show is called Wynonna Earp, so you need Wynonna Earp. She’s still the champion, she’s still got the magic gun and the best hair on the show — sorry, everyone else!

There are a couple of unresolved issues. We still have Eve, who we kicked out the the Garden very early in the season, and who can kind of shapeshift; she could take on the appearance of any one of our characters! That would certainly throw a wrench in the works in Purgatory. There are a million different reasons to bring Wynonna back, to help out her sister.

TVLINE | And lastly, was there anything you had to cut or just didn’t have room for, or any returning cast you couldn’t fit in?
Oh, tons. But look, you kind of hit the nail on the head earlier. I’m always striving to be better, and some stuff at the end felt a little rushed, with Dark Angel Waverly. I think if it hadn’t been a pandemic, there would have been more people at that wedding. I would have loved four more episodes to round the bend there. But look, that’s Wynonna Earp, man — perfectly imperfect! So that’s what we did, and what a ride it’s been. The ride of a lifetime for me.