It’s never easy to say goodbye to a beloved character. But the festive funeral in Part 3 of Netflix’s Family Reunion certainly helped soften the blow.

Arguably the most touching of the eight new installments when the sitcom returned Monday, Episode 7 (titled “Remember When the Glass Passed?”) focuses on the sudden and unexpected death of Principal Glass (guest star Mark Curry) and how it impacts each of the McKellan kids.

Executive producer and creator Meg DeLoatch says she knows Family Reunion fans will miss Curry and his character, because she does, too.

“I went through a lot with that decision, and I needed it to be a character that people really did like,” DeLoatch says of Glass’ death. “But I couldn’t have it be a character that child viewers were so invested in that it felt like an added layer of devastation on top of what’s going on in their real world. I felt like because they hadn’t seen that character a lot, it might not be as traumatizing as if we had taken a character that recurred 10 times.” 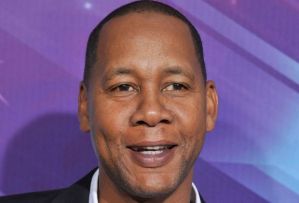 To say goodbye, the school and Glass’ family and friends celebrated his life with an exuberant New Orleans-style funeral and second line procession. And Jade, who didn’t always see eye-to-eye with her school’s principal because he could be hard on her, realized he actually cared and led the second line to pay homage.

“It was a tough decision, partly because we like him so much, and it was so endearing for him and Jade to have that contentious relationship and then have it set at peace,” DeLoatch adds. “It hurt me, too, because Mark is a friend, and he’s so talented, and he goes deep in it. It feels like he should get attention for the way he pulled it off.”

DeLoatch says one of the advantages of tackling death in Part 3 is knowing that it brought real-life viewers a sense of closure in their own lives.

“A woman reached out to me on social media, and her son is 10, and they unexpectedly lost his father, her husband, over the last year,” she says. “But he responded to the episode, and it was so gratifying to hear because we spent a lot of time on that particular episode really trying to provide a full experience, because everybody responds to grief so differently. It’s been a tough year, and it’s been a tough year for Black people. We really wanted to connect with our audience, and I’m already getting confirmation that it did, at least in this case. I really felt moved by their story.” 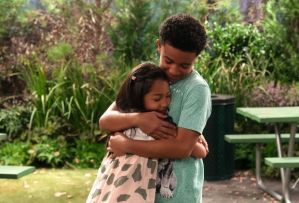 DeLoatch hopes that the episode will help other families, too, she says, and commends the streamer for looking out for her cast and hiring a grief consultant and grief counselor to go over the scripts.

“I hope that people watching will have these conversations with their family members and their kids,” she reveals. “I certainly use it as a springboard with my 7-year-old trying to talk to him about some of the things that are going on. Of course, every child can only think and act at the level that they’re at, but I don’t want my child to be afraid of death. I want him to accept it as a fact of life because that’s what it is.”

Tony-winning actress Anika Noni Rose’s comical guest-starring turn is another triumph for DeLoatch, she says. Rose plays Mazzi’s attractive and charming music teacher, on whom he has a crush. But things get complicated when his Uncle Daniel starts pursuing her romantically. In the end, Daniel leaves the teacher alone out of respect for Mazzi’s feelings, even though her abundance of offspring and past problems with the law appeal to his hunger for drama.

“I actually met Anika Noni Rose through a good friend, and I was saying, ‘Do you think Anika would do the show?’ And my friend said she’s so funny, but doesn’t get to do a lot of comedies,” DeLoatch recalls. “I was so pleased when she came because she’s so classy. She would be any boy’s crush.” 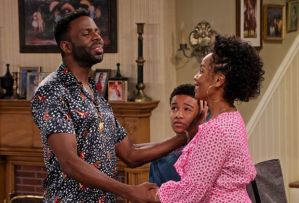 “With Uncle Daniel, that kind of woman is really his kind of woman,” DeLoatch says. “The more drama, the more needy, the more likely he would go down that road. And we wanted her to be the perfect woman for him to the point where it would be a struggle for him to stay away from her, even to honor his nephew’s boundaries. Then there’s the sweet scene between Jade and Mazzi where Jade says, ‘You know you can’t be with this woman.’ It’s such a sweet moment of childhood that happens with some kids with impossible crushes.” 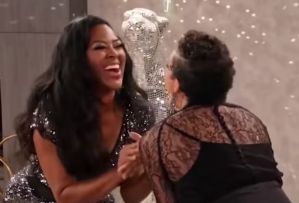 Part 3 of Family Reunion also tackles reality TV and how it gives kids the wrong ideas about conflict resolution, manners and materialism. Real Housewives of Atlanta star Kenya Moore guest-stars and, in true Kenya Moore fashion, gets in a dig about her RHOA co-star NeNe Leakes, in which she calls her “a giraffe.” DeLoatch says although she has heard through various channels that Leakes is unhappy with the show for allowing Moore to take a swipe at her, she hopes that the reality star knows there are no hard feelings.

“I hope that NeNe and her team look at the episode in its entirety and understand that we are skewering the genre, not her,” DeLoatch says. “Honestly, I’m not trying to tear down any sistah. We’re being true to the form and who Kenya is, but all in good fun. I also liked being able to comment on reality TV and pointing out that with all of the things that we do, our children are watching. Let’s make sure we’re proud of it.”