This week on The Falcon and the Winter Soldier, as everyone started to close in on Karli and the Flag Smashers, big decisions had to be made — culminating in one of the MCU’s most disturbing moments ever, on any size screen. 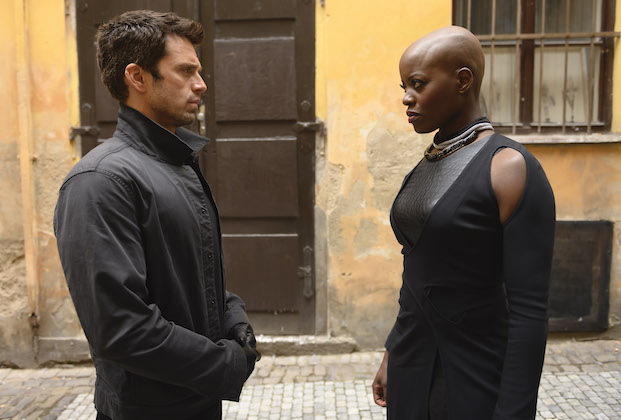 Episode 4, titled “The Whole World Is Watching,” opened with a flashback to Wakanda, six years ago, where Ayo led Bucky through some sort of ritual that rid him of Zemo’s control forever. Cut to “now” and that alleyway in Latvia, where Ayo cannot understand why, after all the time and resources Wakanda invested in helping Bucky, he has now freed Zemo. “We need him,” Bucky explains, and Ayo agrees to give him eight hours with T’Chaka’s killer — “and then we come for him.”

Bucky loops in the others to the Dora Milaje’s presence/interest, after which they get wind of the Flag Smashers’ attack on the GRC depot, and the 11 injured and three killed as a result. Zemo wonders if Sam has the will to do what needs to be done once Karli, a “kid,” is found, but Sam insists there can be a peaceful resolution. Zemo maintains that there is no separating a Super Soldier from supremacist ideals, and that things will only escalate until they kill Karli… or vice versa. Sam notes that the Super Soldier serum never corrupted Steve, to which Zemo notes: “Touché. But there has never been another Steve Rogers, has there?”

Suspecting there will be a ceremony to mourn the late local leader known as Mama Donya, the gents scout out the neighborhood. And while Sam comes up empty when chatting with a internationally displaced teacher, Zemo chooses the “stranger with candy” route to convince a little girl to later lead them to the funeral. Sam calls Sharon to ask for her help tracking Walker, and she warns that the Power Broker has gone “apes–t” over Dr. Nagel being killed, and things in Madripoor are about to get “really nasty” as a result.

Karli and henchman Nico visit a cemetery to retrieve the hidden satchel of Super Soldier serum vials, and the former wonders if it is a mistake to “make more of us.” Nico says he was once taught that if an action makes you scared, it’s probably the right thing to do. Besides, as a fan of the OG Cap, he sees her as a perfect successor, a hero who knows regular folks’ pain. 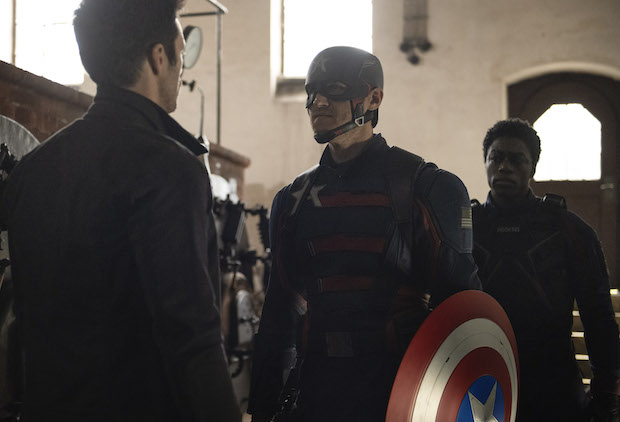 Walker and Lamar find and confront Bucky, Sam and Zemo, who are on their way to intercept Karli at the funeral. Sam and Walker debate the best approach, with Sam wanting to talk to Karli alone, and Walker wanting to go in hot. Led to the memorial service by the girl Zemo had spoken to earlier, Walker gives Sam just 10 minutes to talk Karli down. Getting alone with Karli, Sam says that he understands her frustration and sense of helplessness, but that there “doesn’t need to be a war” to make things right. Sam says that Zemo fancies her a supremacist, and when Karli goes to dispute that characterization, she in fact catches herself reinforcing it. Alas, just as Sam seems to be breaking through to Karli, an impatient Walker storms in to make an “arrest,” and Karli feels betrayed. A fight and chase ensues, with Zemo getting the drop on Karli in a cellar, and putting a bullet in her belly. The clash causes her to drop and scatter the serum vials, which Zemo near-immediately smashes with his boot. Walker arrives and KO’s Zemo, and after Karli flees, NuCap spots one stray, intact vial on the floor… and then pockets it before Sam, Bucky and Lamar arrive.

Regrouping with Nico and Dovich, Karli reports that the vials were destroyed, but the fellas insist that as a group, they are still stronger than those who oppose them. Just then, Dovich gets a text from the Power Broker, who demands the serum back “or I will find you, and I will end you.” Knowing they cannot fight a battle on multiple fronts, Karli says she has a plan to separate Sam and Bucky, and then hopefully kill Captain America.

In their Latvia hangout, Zemo asks Sam if he was ever offered, or would take, the serum, and Sam is firm with his “no.” Then, just as Bucky is observing that NuCap “ain’t right,” Walker arrives with Lamar to claim Zemo and spoil for a fight with Sam. The boys are interrupted by the zing-chunk! of a vibranium spear, thrown by Ayo, who has arrived with a fellow member of the Dora Milaje. Walker tells the Wakandan she has no jurisdiction here, to which Ayo counters, “I have jurisdiction wherever I stand.” Walker makes the mistake of touching her, and a fight ensues between him, Lamar and the Dora Milaje, while Sam, Bucky and Zemo… casually observe. Eventually Sam and Bucky do step in, to prevent NuCap and Battlestar from getting hurt too badly (or worse), and Ayo pulls a swift and apparently secret move that instantly detaches Bucky’s arm! After the Dora Milaje leave, a humiliated Walker sighs that it wasn’t even Super Soldiers that bested him….

Afterward, with Lamar, Walker asks his sidekick if he would take the serum if offered, and Lamar responds with a quick “Hell, yeah!” “You’re not worried how it might change you?” asks Walker, but Lamar posits that the serum only makes a person “more” of what they already are. Lamar brings up Walker’s three Medals of Honor for prudent decision-making in battle, but Walker characterizes the badges as reminders of the worst day of his life, when he did some questionable things in Afghanistan. Lamar makes Walker wonder, though, how many more they may have saved that day if they had the serum…

Karli sets her plan in motion, calling Sam’s sister Sarah to say she is debating killing her brother. “I thought I could trust him, but it turned out he’s working for Cap,” Karli grumbles. Sarah, though, insists that her brother “is not working for that man.” Karli “asks” Sarah, while not-so-subtly threatening her and her sons, to relay a meet-up location to Sam. Sarah complies, and Sam arrives at the meet-up with Bucky. Karli claims she has no interest in hurting Sam, that doing so would be “meaningless,” optics-wise. “Join me, or do the world a favor and let me go,” she offers. The convo is cut short by a message from Sharon, who has located Walker. 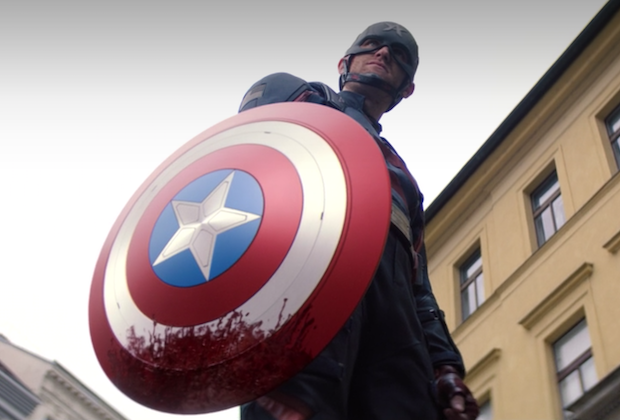 Sam flies off while Bucky slugs it out a bit with Karli, and drops in on Walker just in time to see NuCap exhibit some crazy new strength. Sam helps Walker search for an abducted Lamar, but just as they find him, a group fight with Karli and some Flag Smashers breaks out. Ultimately, Karli lobs Lamar at a stone pillar, against which he appears to break his neck, and then slumps over, dead. An enraged NuCap chases after the scrambling Flag Smashers, pinning down Nico in a public square.

“Where is she?!?!” Walker bellows at the Flag Smasher. “It wasn’t me!” pleads Nico, referring to Lamar’s killer. Even so, a distraught, ‘roiding-out Walker raises his mighty shield to the sky, and then smashes it down on Nico, again and again… and again and again… drenching it in the bludgeoned man’s blood, as scores of onlookers watch, their iPhones capturing the horrific, un-heroic brutality.