On American Horror Story: Cult, she played a staunch Hillary Clinton supporter who stopped at nothing to punish those — her wife included — who didn’t vote for the first female Democratic presidential nominee. While her role as a bigoted busy body named Betty on Amazon Prime’s THEM is different socially and politically, the two have things in common. And viewers will find out the extent of their likenesses when the 1950’s set terror anthology premieres this Friday, April 9, and centers a Black family harassed by spirits in their house and racist anti-integrationists on their block.

“My AHS character, Ivy, and Betty are both in cults. They both need someone to tell them what to do,” Pill tells TVLine. “I was drawn to the role because of [series creator] Little Marvin’s scripts of telling this story of real-world terror in conversation with these psychological horrors. The reality for Black people in this country has been horrific for centuries, and to make that visceral in the way that we’re discussing home ownership and the American dream, and who gets to have a family and whose labor is appreciated, is incredibly interesting and deepens the conversation.”

“There is a version of this where the villain is a man, and I don’t think it’s as good a version,” she posits. “If there’s no Betty, there is no Karen. Betty is the original Karen. And the role of white women and the way that we get to be perceived as vulnerable, and the ways that we can manipulate that to endanger others, is worth examining. It’s a very different kind of violence, but it is still violence.” 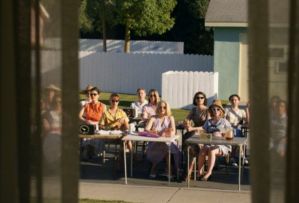 To help convey this, Pill made sure to infuse Betty with subtle touches such as a certain smile and a distinct way of speaking. But all monsters have an origin story, and horror fans will learn Betty’s in Episode 4.

“Betty smiles all the time and never raises her voice,” the Toronto native says in her best Betty voice. “Because she would not. She’s very civilized. And she has been victimized and became a monster. Little Marvin does a beautiful job of unpacking Betty over the course of the season, but she doesn’t get a pass. You don’t get to choose white supremacy and come away unharmed. At no point in this system do you get to walk away without trauma and harm, there’s just no way.”

“You can’t look at the undervalued and unpaid labor of white women in the neighborhood without examining racial capitalism,” she adds. “You don’t get to separate them. LM has done just a genius job of not making Betty one-dimensional. She remains the villain but she is not inhuman.” 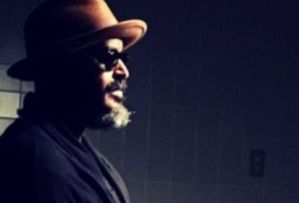 Little Marvin, who executive-produced THEM with Lena Waithe, says it was important to make Betty as layered as she is villainous.

“There is a certain terror that is never really discussed,” he continues. “This is a type of behavior that stretches all the way back through history. Luckily Alison Pill, who is just phenomenal, was unafraid. She said, ‘I am going in. I don’t want you to like me. I’m going to own this experience.’ And she did, man. She just bodied it. It was crazy. She’s scary.” 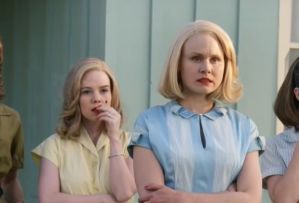 Time will tell if those who watch THEM are able to distinguish Betty from her portrayer, but Pill says she’s ready for the challenge.

“I am fine with being the face of Karens,” Pill says bravely. “I can take on the discussion of white womanhood and the problems of white feminism. I’m interested in that discussion. I will take people on Twitter being like, ‘You are terrible.’ Those are good moral judgements.

“What terrifies me more is the opposite,” she concludes. “If anybody is super into Betty, I’m going to feel misunderstood. I don’t want Betty fans. White supremacist fans are way scarier.”