If explosive fights and soapy drama are elements you miss from Challenge seasons of yore, then look no further than this week’s The Challenge: All Stars.

Thursday’s second episode shined the spotlight aaaaall over spicy vets Katie and Trishelle, and as old wounds resurfaced for the women, it didn’t take long for the F-bombs to fly and the nasty insults to be slung. Were the two legends able to make amends, and which female booked a return flight home? Let’s break it all down.

Trishelle tells Katie that she doesn’t want to be the first woman sent packing, but if she is, she jokes she’ll never talk to these people again. In an interview, she reminds us that she and Katie are extremely close, and lived with each other for years. She’s confident Katie will have her back 100 percent, and if that isn’t some foreshadowing or editing wizardry right there, I don’t know what is. Katie, on the other hand, sounds less enthused, discussing how odd it is to live with a former roommate again now that she’s in her 40s. This friendship, it seems, might not survive the hour.

Elsewhere, Trishelle apologizes to Aneesa for a racially charged exchange they shared on Rivals II. “The only regret that I had leaving the last Challenge is how I left it with Aneesa,” she confessed to the audience. “It’s weighing on my heart and I really want to get it out in the open.” Trishelle tells Aneesa that what she said back then was racially insensitive, and that it would never happen again. Aneesa accepts the apology. “It’s unfortunate we had that hiccup nine years ago because we could’ve had a great friendship… I truly believe in giving people room to grow,” Aneesa says. The two hug it out, and honestly, we love to see it.

CHALLENGE DAY | It’s TJ’s favorite challenge: Trivia! This time, the questions are all based on past seasons. Players are raised 30 feet in the air over water, and with each wrong answer given, they must step forward onto thin flooring that will eventually break and plummet them to the icy waters below. The men’s round comes down to Nehemiah and Teck, but the win — and the Lifesaver — goes to the former.

For the ladies, Trishelle falls first, which unfortunately sends her straight into elimination. When Kendal gets eliminated, she hops off of the apparatus because she’s scared to fall through. It’s a whack move which ultimately irks everyone else… but more on that later.

Ruthie and Aneesa outlast the rest, with Aneesa taking the win and earning safety from the Arena. 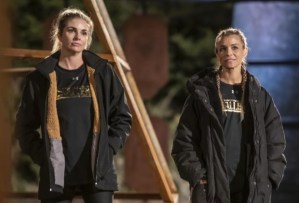 DELIBERATION | Trishelle chats with some of her besties about who she should go against in the Arena. Beth’s name comes up, but the conversation quickly turns to Kendal’s performance. Trishelle decides to leave the decision up to the group rather than vie for a specific opponent.

At the house meeting, Jisela asks Kendal what happened. Kendal’s explanation is even more confusing than her actions were. It’s a dogpile as everyone nominates Kendal, except for Darrell, since the two are buds from their original Road Rules season. (Can’t blame a guy for that kind of rock-solid loyalty.)

KATIE AND TRISHELLE THROW DOWN | Trishelle is hurt that Katie didn’t tell her the result after returning from deliberation. “I think this is misdirected anger,” Katie says via confessional. “When Trishelle is stressed out, she typically wants to take her frustrations out on me. But I don’t need to take anyone’s s–t, and it sure as s–t won’t be hers.”

And that’s when the fireworks begin.

The sound of Katie screaming reverberates throughout the house in the middle of the night. “F–king b-tch! I am not gonna let you f–king talk to me like that anymore!” (Katie and Trishelle, ladies and gentlemen!)

Katie says she’s trying hard not be “the Katie everyone remembers” (and yes, we all remember!). She talks about always having to placate Trishelle’s emotions, but Trishelle overhears her, countering that she’s always the one having Katie’s back, and she can no longer stick her neck out for her. “You have to ride or die. This one is weak, and I don’t like that,” Trishelle announces to everyone within earshot.

So… I know I just complimented Trishelle mere paragraphs ago for her admirable growth and all, but she then goes and unleashes this excessive pettiness on Katie, and, well, it’s pure gold. “You are trashy,” she seethes. And she’s not done. After Katie exits the room, Trishelle trifles to her castmates, “She has no friends and I have tons, so it’s fine.” We are truly blessed to have this All Stars season, my friends.

THE ARENA | The elimination battle du jour is “Knot So Fast,” another iconic comp. The women must wrap a 200-foot, heavy rope around a playground-like structure, knotting it as much and as tightly as they can. After 20 minutes, players trade and undo what their opponent just tied up. First to free the rope remains in the game. Both women fight like hell, but this round goes to the Road Ruler.

Trishelle might not have been with us for long, but what a showing! Personal growth, drama, shady one-liners… this is one all star who exited far too soon.

Were you Team Trishelle or Team Katie? Does Kendal have what it takes to succeed in this competition? Hit the Comments with your thoughts!