This week on NBC’s Manifest, as Olive helped houseguest Angelina “follow” a calling, their path eventually crossed with that ofthe three Meth Heads who were newly on the lam after emerging from their once-frozen grave.

Hunted down by Michaela and Drea, Kory and Jace managed to slip away. Pete, though, lagged behind and got nabbed by the cops, fixated as he was by a photograph he had found of him as a kid. Thing is, said snapshot actually belonged to Angelina, who had just plucked it from an excavated school time capsule. And her 10-year-old self is standing in front of Pete!

TVLine spoke with series newcomer Holly Taylor (The Americans) about this very Manifest-y twist of fate, and whether things are about to get weird for 828er Angelina.

TVLINE | What are we to make of the fact that Pete (played by Devin Harjes), one of the Meth Heads, happened to be the background of a photo of 10-year-old Angelina?
It’s pretty crazy. Like, what are the odds of that? It’s one of those things that could only happen in the world of Manifest, where “everything is connected” as they always say. Seeing Pete in the background of that photo is foreshadowing some more information in the future and will potentially lead to something that the audience isn’t going to expect.

TVLINE | So it might be more than a coincidence. It could be hinting at a connection to be explored?
There definitely is a connection between the two of them that is going to grow and flourish throughout some of the season. 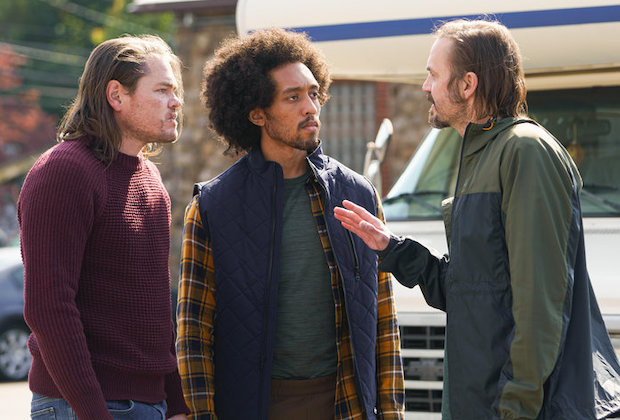 TVLINE | Who of the two would you say is more fixated on their connection, him or her?
I would say it’s equal. Angelina is really desperate for any kind of connection. She doesn’t have anyone in her life that is really there for her, except for the Stone family. Any connection that she can have she grabs onto desperately. Pete also doesn’t have the best support system around him either, so someone who genuinely cares about him is probably refreshing.

TVLINE | Of course we have several characters who were on Flight 828, a bunch of them get callings… All told, what specific role will Angelina serve this season? What new directions will she take this storyline?
Hmm, thats a loaded question! I think that Angelina is going to open up lots of different paths for the Stone family this season. At first, of course, it’s just the journey of them finding her, saving her, figuring out where she comes from, what her life has been like, and helping her get past the trauma  she has been through. But as Angelina starts to warm up to this family,  we definitely see a bond growing with Olive (played by Luna Blaise).  Olive takes her in and shows her how to follow the callings, and see how positive  things can come out of that. Angelina learns that she doesn’t need to be scared of them, as she has been.

TVLINE | And that in turn gives Olive added purpose. As someone without callings, that character has always been looking for her place in this story. Now she gets to be a conduit, a helper.
That’s the whole point for it, definitely. Aside from them being similar in age, Olive gets a sense of independence and responsibility from this that she has been missing out on.

TVLINE | I believe it’s some sort of old timey actor thing to ask, “What does my character want?” So, what does Angelina want, coming out of that horrific ordeal with her parents?
Really, the whole season, everything that Angelina does is driven by her want for connection, for someone to be there  for her in her life. Everyone that she has had has either left or thought that she was crazy, or disregarded her — including her own parents, as we saw.

TVLINE | They thought you were possessed!
Yeah, they thought the callings were the “devil inside of her” and that the “end of days” were upon them. They didn’t encourage it, which is why it’s so important the Stone family shows her the callings are a good thing to be following.

TVLINE | Lastly, is there anything ahead for your character that is even more harrowing than how we first found her, crammed into that cellar closet with food slipped to her?
I mean, that was definitely the most intense, emotional state that she was in throughout this season — but Angelina, believe it or not, is going to go through even more traumatic events. She is going to spiral again, and have to pick herself back up. Some crazy, heat-of-the-moment decisions are going to be made by her when she’s trying to navigate all of her feelings, so…. It doesn’t go down from there. If anything, it’s a rough road for the whole season for Angelina.

TVLINE | I suspect she may prove to be more of a handful than the Stones anticipated….
Potentially! Everyone that they take in ends up having a story and their own problems, so she can become a handful in a way — but I don’t think she sees it like that.