In The CW’s Kung Fu, Nicky Shen (Legacies‘ Olivia Liang) is still figuring out who she wants to be while embracing a new destiny.

Wednesday’s series premiere begins with Nicky in the middle of what she thinks is a cultural tour of China. After realizing that it’s actually a matchmaking ploy to find a Chinese husband (orchestrated by her mother, no less) she flees and crosses paths with Pei-Ling (Vanessa Kai), who runs a local monastery. Her one-night visit becomes a three-year training in the martial arts, and Nicky finally feels at home.

While admiring the picturesque view, Pei-Ling encourages Nicky to try and make peace with her family, who she hasn’t seen in three years. However, Nicky is determined to stay at the monastery. That night, their monastery is attacked by a group of assassins searching for a mystical sword said to imbue its wielder with great power. During the struggle, Pei Lei is fatally wounded by an assassin named Zhilan (Yvonne Chapman), who steals the sword and takes off. 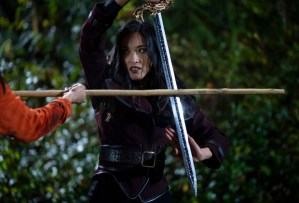 Following Pei-Ling’s final instructions, Nicky chases after Zhilan in an attempt to get the sword back and take down her mentor’s killer. During their fight, Nicky picks up the sword, which glows and burns her hand, leaving mysterious markings on her palm. Still, Zhilan gets away, and Nicky returns home to San Francisco.

She receives a mixed reaction from her family: Her father Jin (Tzi Ma) and sister Althea (Shannon Dang) are glad to have her back back, while her brother Ryan (Jon Prasida) and mother Mei-Li (Kheng Hua Tan) aren’t so enthusiastic. Mei-Li is especially disappointed, stating that her daughter “died three years ago.” There’s plenty of mother-daughter tension — Nicky is upset with her mom for trying to control her, and Mei-Li resents her for disappearing — and they can’t seem to get past their grievances with each other. Jin encourages Nicky not to run away again and to meet later at their family’s restaurant.

In the meantime, Nicky visits her ex-boyfriend Evan (Gavin Stenhouse), who’s now an assistant district attorney, to look into the sword and that assassin Zhilan from sketches that she drew. Later that night, she sees the spirit of her deceased mentor Pei-Ling, who again urges her to heal her relationship with her family before going after the sword. Nicky heads to her father’s restaurant in time to find her father badly beaten up. It turns out that her parents had taken out a $50,000 loan from Tony Khan, a member of the local triad, which has now been doubled with interest. If they don’t pay in 72 hours, Khan’s people will kill Jin and take over his restaurant.

Nicky goes on campus to visit her brother, who’s still upset with her for not being there for him when he came out to their parents. Nicky apologizes for leaving him out to dry, and they share their first genuine hug in more than three years. Nicky also runs into Ryan’s hunky friend Henry (Eddie Liu), who’s doing his Master’s in ancient Chinese history and will definitely be a useful ally.

She tells Henry about the sword, and he identifies it as a sword with power that can only be harnessed by its rightful owner — and it’s one of eight.

In an attempt to help her parents, Nicky asks the locals about Khan, but everyone is too scared to talk. She and her siblings are soon attacked by members of the local triad, hinting that they’re getting close to something. Nicky, with a surprising assist from Henry, is able to take them down. Though her mom is upset that Nicky may have endangered their family even more, it’s clear Nicky’s display of strength has also done some good. Cindy, a local shop owner, is inspired to speak up after watching Nicky fend off the triad. But even with a witness willing to testify and access to Khan’s confidential documents, Evan doesn’t think their evidence is strong enough for a conviction. They need a smoking gun. 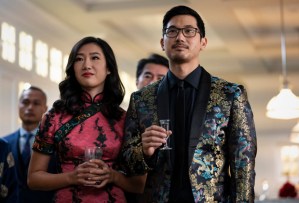 Althea hacks into Khan’s bank accounts and uncovers a shady recent transaction. It looks like Khan is smuggling drugs and might be doing a big drop later that night. Ryan sneaks down to the docks to gather evidence that will hopefully save their family. Nicky tracks her brother down and engages in a fight with the triad. Ryan watches in amazement as Nicky takes on the whole gang by herself and showcases some serious power — including an extraordinarily high leap alluding to her potential as someone capable of wielding the sword — which Nicky brushes off as mere training combined with physics. Either way, Nicky did that.

The next day, the Shens gather for Althea’s wedding. and it’s the first time we’re seeing them look like a cohesive unit. Jin and Mei-Li agree that Nicky should stay with them, bringing all three of them one step closer to reconciliation.

Henry shows up to reveal important new information about the sword: If someone were to collect all eight, they’d unlock astronomical power and cause great devastation and destruction. Zhilan already has one, and it’s up to Nicky to prevent her from getting the remaining seven. Game on.

What do you all think of Kung Fu‘s first episode? Grade the premiere in the poll below, and let us know your thoughts in the comments!