Warning: This post contains spoilers from Wednesday’s Chicago P.D. Read at your own risk.

It looks like “Upstead” isn’t going anywhere anytime soon. This week’s Chicago P.D. found Halstead and Upton taking an important step forward in their relationship after closing out an intense case.

Early in the hour, Halstead told Upton he loved her. Rather than say those same words back to him, however, Upton excused herself and raced out of the apartment. It was a knee-jerk reaction to her traumatic childhood in which “I love you” always came after an abusive episode.

After admitting that she didn’t really understand how relationships work, Upton told Halstead that she really wants to be with him and learn how to be better. Halstead assured her that they’ll figure it out, also declaring that he wants to be with her, too. It was a sweet moment that really affirmed where they are in their relationship.

“This does bring them closer together,” Spiridakos tells TVLine via email. “This is the first time Hailey has ever had someone stay after seeing this guarded and fractured side of her. This feels like her first time really being in love. Jay staying and loving her so completely makes her feel safe, but also for the first time, she has something to lose.” 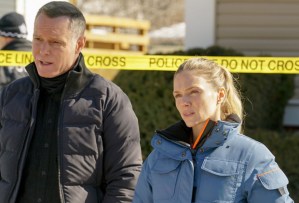 According to Spiridakos, there’s even more “Upstead” to come later this season, and we’ll see the Intelligence detectives struggle with balancing their relationship and their workplace dynamic. “There is an episode where Hailey tries to protect their relationship in the best way she knows how,” she adds.

The episode also saw Upton become deeply affected by a case involving a missing young girl who reminded her of herself when she was younger. Upton went to great lengths to catch their suspect and even butted heads with Voight, who made it clear that they can’t circumvent the law the way they used to. Though she came close to pushing things too far — she suggested illegally using ICE to threaten their undocumented suspect and his family — Upon kept herself in check and was able to find the missing child without resorting to that unlawful tactic.

“I think what this case showed her was that she solved the case without crossing the line and using ICE,” Spiridakos explains. “If she had crossed the line, it wouldn’t have worked. She would have lost the case, and the girl would still be missing. She’s learned that she can’t act on emotion, with this desperation to solve the case at all costs without having real consequences that could cost her everything. I hope we continue to see her grow in this way in future episodes.”