Legacies’ Olivia Liang steps into the spotlight as a student-turned-warrior in Kung Fu, premiering this Wednesday at 8/7c on The CW.

The series, which breaks ground as the first network drama to feature a predominately Asian-American cast, follows Nicky Shen (Liang), an overachiever who drops out of college and heads abroad following a quarter-life crisis. After a life-altering journey to an isolated monastery in China, she returns home to find San Francisco rife with corruption and crime. Realizing her new destiny as the town’s protector, she’ll use her training to take on the local triad while reconnecting with her family and searching for the assassin who murdered her Shaolin mentor Pei-Ling (Vanessa Kai).

Creator Christina M. Kim (Blindspot, Lost) brings a fresh perspective to the remake, which flips the script on the ’70s Western drama starring David Carradine. Whereas the original Kung Fu centered its story around a white man, this new iteration puts its Asian and Asian-American cast — led by Liang — front and center. With the series set to debut this week, Liang says the timing is uncanny, given the current events.

“It’s almost jarring to see the contrast between what’s happening in the world with anti-Asian hate crimes and violence and rhetoric being reported in the media, and then our show, where we’re really celebrating what it is to be Asian,” she tells TVLine. “I want to see more of that. I don’t want to just see the pain that we’re going through, although is important to shed light on it. I also want to see us going through joy, falling in love, experiencing good things in life, and our show is going to bring some of that to the screen.”

Liang adds that “the timing is just very eerie. Our showrunner and creator Christina Kim wrote this pilot over a year ago, and the fact that it is so poignant right now, we never could have predicted how relevant it would be. We always knew our show was going to be important, but it’s very eerie just how important it is right now in April 2021.” 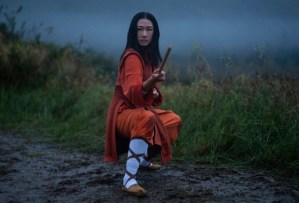 In the series, Nicky finds her voice through her training and undergoes a massive personal transformation. Liang, who had no prior martial arts experience, admits she went through a similar journey while preparing for the role.

“I feel like a badass. I feel empowered,” she shares. “This show is my first real experience with martial arts, and I feel so privileged that I get to learn it for my job. Doing these beautifully choreographed fight sequences, it just really makes me feel strong, and it’s really translating into my personal life of just feeling a lot more powerful and a lot taller and stronger and bigger and just ready to take on the world.”

In addition to Liang, the CW drama also stars Tzi Ma as Nicky’s father Jin Shen, a restaurant owner with secrets that could bring down their family business; Kheng Hua Tan as Nicky’s mother Mei-Li Shen, who helped her husband with his business and also holds damaging secrets; Jon Prasida as Nicky’s brother Ryan Shen, a witty pre-med student; and Shannon Dang as Nicky’s sister Althea Shen, a computer whiz who just got engaged.

The series paints a multi-dimensional portrait of a Chinese-American family, with each of the Shens playing an important role in the story — including Nicky’s parents.

“What our writers have done so beautifully is make this a multi-generational show,” Liang explains. “When we see parents in shows, they’re not really the main storyline. They’re just there to move the plot along. But on our show, the parents are a huge part of every story, of Nicky’s purpose and drive. As the season goes on, and we see the love that Jin and Mei-Li have for each other, it just infuses so much richness into the story and so much history into what they’re going through. I think it’s something that hasn’t been represented that well in media and entertainment. This immigrant couple who have kids, they strived for the ‘American Dream,’ and to see what they’re going through is really beautiful.” 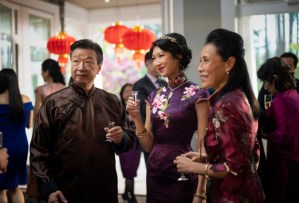 The show will see Nicky embark on a journey of self-discovery as she embraces her newfound destiny, tries to make amends with her family and processes the death of her mentor.

“We find her trying to bridge the gap between the woman she was when she left and the woman she is now, and all of these people that she has to reconcile with who only know her as the old Nicky,” Liang concludes.

With the returning warrior being pulled in different directions, she’ll be dealing with “this overarching trauma that she went through and this kind of final call to action from her shifu [mentor]. At the same time, she’ll need to heal relationships that she left behind, so it’s like this double fish-out-of-water story where she’s really just trying to find her footing and her place in the world.”