Ryan Seacrest welcomed viewers back to the American Idol studio on Sunday, as 12 of the season’s Top 24 finally got to compete for our votes — and in front of a “living, breathing” audience of (masked, socially distanced) fans, no less.

Before we break down each of Sunday’s performances, here’s how the voting works: Following Sunday’s broadcast, you can vote for your favorites — 10 times per contestant, per voting method.

The other half of the Top 24 will perform on Monday, and you can vote for them after that broadcast. Next Sunday (April 11), the top eight singers from each night will come together to form this season’s Top 16.

Got that? Either way, it’s time to dissect this week’s 12 singers, each of whom performed a solo number before being paired off with a music superstar for a series of unforgettable duets:

ALANIS SOPHIA, 19 | Kicking off this show couldn’t have been easy, but Sophia did the damn thing with a solid take on Sia’s “Alive.” It took her a minute to find her footing, but she was fully confident by the end — and you can’t say she didn’t absolutely crush that final high note. Then came her duet of Bradley Cooper and Lady Gaga’s “Shallow,” for which she was joined by Season 10 Idol contestant-turned-country superstar Jimmie Allen. Despite standing at opposite ends of the stage (social distancing rules remain in effect!), the two singers exhibited a decent chemistry, and I was really impressed at how seamlessly Sophia transitioned from the softer opening to the powerful chorus. I’m a little disappointed we didn’t get the full Gaga climax (“aaaa-AAAA-aaaa-AAAAAH!!!”), but it was still a good performance. The judges’ only real critique, which they would later give to most of the other contestants, is that Sophia needs to shake off her nerves and learn to own the stage. Click here to watch.

CASSANDRA COLEMAN, 24 | Katy Perry put it best when she called Coleman’s voice a “spiritual experience.” Her solo performance of Sigma and Birdy’s “Find Me” truly transported its listeners to another place, even if it took me a minute to affirm that the shakiness in her voice was more vibrato than nerves. And while her second song — a duet of “Apologize” with OneRepublic frontman Ryan Tedder — was also beautiful, I have a very large bone to pick with Tedder. Of all the celebrity guests this week, he seemed the least willing to share the spotlight with his partner. Did he really need to show off with that final run, rather than letting Coleman get the last moment to shine? (Come on, dude, you’ve already proven yourself.) Despite the praise for her voice, the judges told Coleman the same thing they told Sophia: “Own your moment and watch your nerves.” Watch:

ALYSSA WRAY, 18 | Right out the gate, this powerhouse did exactly what the first two singers couldn’t, fully owning the stage with a gorgeous performance of Carrie Underwood’s “Something in the Water.” The attitude! The growling! That dumbfounded look on Luke Bryan’s face said it all. Anyone who wasn’t already a massive fan of Wray was surely won over by this star-making turn. And that was before she teamed up with Katharine McPhee for a phenomenal duet of Whitney Houston’s “I’m Your Baby Tonight.” Was I puzzled by McPhee’s ’80s prom dress? Sure. But was I absolutely bowled over by how perfectly they harmonized on those fast-paced lyrics? Absolutely. And that final belt from Wray! This was a match made in Idol heaven, and McPhee could teach Tedder a thing or two about working with your duet partner, rather than against them. Watch:

WYATT PIKE, 20 | Here’s the thing — Pike gave us exactly what we expected with his performance of Tate McRae’s “rubberband.” It was chill, solid and professional, as he always sounds. He was even rocking his usual flood-ready uniform of rolled-up pants and boots. Bryan remarked that Pike “felt like a star,” and I can’t disagree, even if there was nothing particularly exciting about the performance. Then came Pike’s duet of “Brand New” with Ben Rector, which completely changed my opinion of the Park City native. Singing without the comfort of his guitar was definitely a risk on Pike’s part, but it paid off wonderfully, as it allowed his natural personality to shine. And the judges couldn’t have put together a better pairing; if I closed my eyes, I honestly couldn’t tell you where Rector ended and Pike began. It was a feel-good performance from start to finish, one that left Bryan in actual tears. “I can’t tell you anything to do different,” he told Pike. “Be you.” Click here to watch.

ALANA, 23 | This Ojai native brought the damn party with a high-energy performance of Dua Lipa’s “Blow Your Mind.” One of the few contestants of the night to directly connect to the audience, Alana made us feel like we all had a front-row seat to her concert, and I loved every second of it. Then came her duet of “Back at One” with Brian McKnight. She was surprised to hear that he had never done this as a duet before, but maybe that’s because it’s… not a duet? Anyway, his voice remains as buttery smooth as it’s ever been, and hers complemented it nicely. He showed her up a bit with some of those glorious runs, but that was more about the arrangement than it was about her talent. Still, Perry suggested that Alana could take a few more risks with her notes, saying, “Don’t be afraid to fly.” Watch:

ANILEE LIST, 20 | I didn’t love this arrangement of Billie Eilish’s “My Future,” which traded the songstresses’ signature softness for a belting bonanza, but I have to commend List’s performance of it. I also have to commend Joss Stone, who might have been my favorite mentor of the night. (Am I the only one who somehow forgot that she’s British?) Their duet of Rufus and Chaka Khan’s “Tell Me Something Good” was funky with a capital F, and everyone was on their feet by the end of the performance. We got to see a whole new side of List — someone I previously gave very little thought to — and I enjoyed what I saw. Though Perry likened the whole thing to a “gospel Sunday brunch,” she said she was hoping for a few more vocal ad libs from List. Click here to watch.

DESHAWN GONCALVES, 20 | Speaking of arrangements I didn’t love, something just felt off about this soulful spin on Bob Dylan’s “Forever Young” (or as I know it, the Parenthood theme song). Fortunately, it didn’t keep Goncalves from showing off those golden pipes. His talents were once again on display for his duet of “I Lived” with Tedder — that is, when Tedder wasn’t doing everything he could to upstage him. He even ended it with another big, unnecessary run. (Sir, you are just the worst!) Still, the judges gave Goncalves mostly favorable feedback, reiterating the same thing they’ve been telling everyone: “Walk out and be the star, baby!” Click here to watch.

GRAHAM DEFRANCO, 28 | I have to admit, I’ve never heard John Splithoff’s “Raye” before, but that’s some baby making music right there. And DeFranco’s falsetto? Three words: Ooh. La. La. And I was even more impressed by his duet of “Love Like This” opposite Rector, who challenged DeFranco to expand his range and deliver a great performance. It was a bonus that I could actually tell their voices apart, unlike when Rector sang with Pike. Click here to watch. 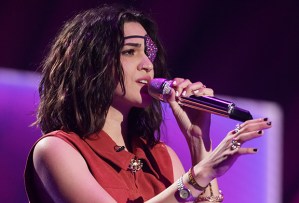 ANDREA VALLES, 23 | Now this was an Eilish cover I could get down with. Valles’ bilingual performance of Eilish and Rosalia’s “Lo Vas a Olvidar” was as beautiful and dazzling as the eyepatch Valles was rocking on that stage. (As she explained, she recently underwent a retina attachment surgery.) Her effortless flipping between belting and falsetto was simply divine. I also loved her and McKnight’s duet of George Michael’s “Careless Whisper,” a truly unexpected but fully appreciated song choice. The way she sang it, you’d have thought it was her song all along. I loved watching her vibing up there, and just like the judges, I kind of didn’t want the performance to end. Bryan said he sees “big-time star quality” in her, noting that these performances absolutely put her back on the map. Click here to watch.

CECIL RAY, 20 | It would take a lot to get me excited about Ray, and his snoozy performance of Tracy Lawrence’s “Paint Me a Birmingham” just didn’t do the trick. It was a boring song choice, completely devoid of any impressive peaks or valleys, and his nerves were palpable throughout. His duet of “Freedom Was a Highway” with Allen was certainly better… but still not great. The judges were kind to tell him that he simply needs to work on his “attitude,” when I suspect that it’ll take much more to earn America’s affections. Click here to watch.

WILLIE SPENCE, 21 | The purity and beauty in this man’s voice is beyond words. Every song he sings is lucky to be chosen bu him, including Bette Midler’s “Wind Beneath My Wings,” which he delivered with soulful excellence. It was a total departure from the original rendition, but unlike other questionable alterations earlier in the night, this one absolutely worked on every level. Then came one of the best moments of the night, if not the season: McPhee joined Spence for an unforgettable performance of Celine Dion and Andrea Bocelli’s “The Prayer.” She was great, of course, but I got full-body chills the moment he joined her. They supported one another beautifully, and I loved that Spence was given multiple chances to shine on his own. Watch:

GRACE KINSTLER, 20 | This vocal bombshell closed out the night with Jessie J’s “Queen,” an explosive self-love anthem that Kinstler fully embodied. Not only was she owning every inch of that stage, but Kinstler’s voice went to places I never would have imagined. And that ending didn’t just wreck me, it wre-e-ecked meeeee. Her duet with Stone, Gladys Knight and the Pip’s “Midnight Train to Georgia,” was a solid follow-up; she followed her mentor’s advice to a T, resulting in a totally unexpected performance. I actually think Stone might be my favorite mentor. She was able to bring out a completely different  — but no less wonderful — side of Kinstler. Richie put it best: “Wow! What do you want me to say?” Watch:

Time to weigh in: Which eight singers from Sunday’s episode deserve to make the Top 16? Weigh in via our poll below, then drop a comment with more of your thoughts.