This week on The Falcon and the Winter Soldier, the reintroduction of Baron Zemo ultimately led to two other blasts from the MCU past.

Following an in-universe commercial for the GRC (whose slogan is “Reset. Restore. Rebuild.”), the episode “Power Broker” opened with John Walker and Lemar joining the local polizei in a raid of the safe house where Karli and the Flag Smashers (great band name) were last lurking. Pressing one confederate for answers, this Cap is not shy about colorful cussing, eventually threatening the guy with, “Do you know who I am?!” Even so, they come up empty in the face of such well-cultivated loyalty. 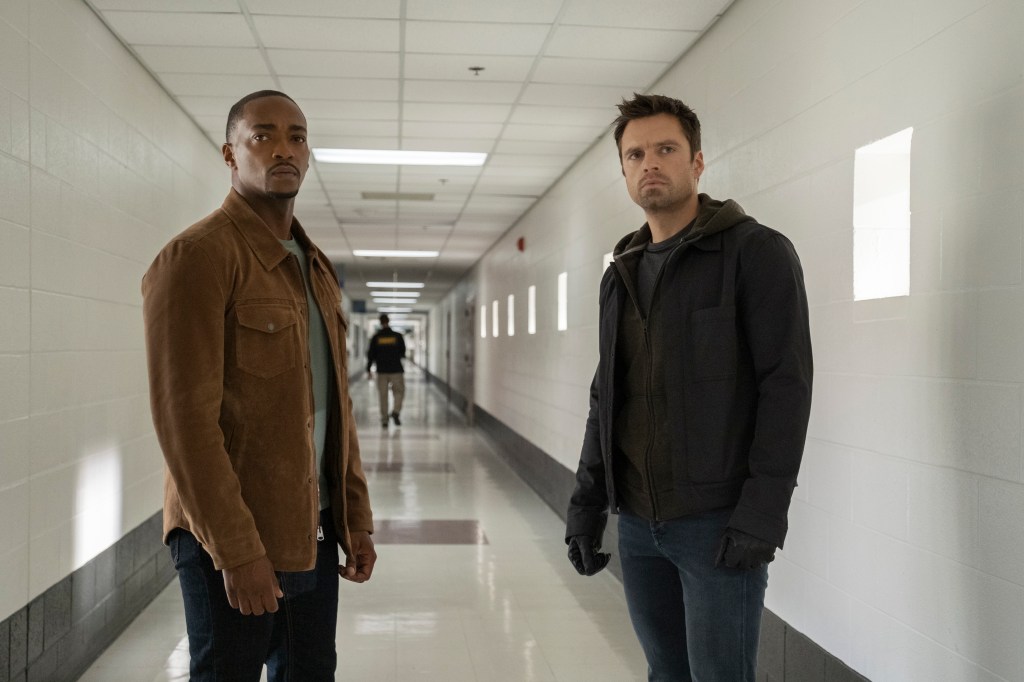 Bucky and Sam meanwhile arrive at Zemo’s Munich prison, with the former insisting on going in alone. If only for kicks, Zemo tries his code words on Bucky, but to no avail. Bucky explains that someone has created a Super-Soldier serum, and they need to find out who — and Zemo senses his desperation. Later in some sort of garage, Bucky maintains to Sam that while Zemo is crazy, he does have a code. Bucky then walks Sam through a “hypothetical scenario” in which a fight breaks out inside the prison, and escalates, just as a fire alarm is pulled for good measure. Just as Bucky finishes his “hypothetical,” an escaped Zemo walks in, and Sam realizes the breakout already happened. Bucky notes how Sam once stuck his neck out for Steve, and him, during Civil War — and now he is asking him to do it again, by going along with this plan.

Zemo rifles through some old cars and belongings of his, grabbing among other things a purple mask. The trio then hop aboard Zemo’s private jet — being a baron has its privileges! — to find Selby, a mid-level fence in the island nation of Madripoor. They can’t simply “walk in” as themselves, though, so Bucky slips into his steely Winter Soldier persona, while Sam is invited to “pimp” up his style as Conrad Mack aka Smiling Tiger. Entering the bar where Selby holds court, “Conrad” is served his “usual” (something involving a snake egg/innards…?), while Zemo nudges Bucky to play along and bust some heads as Winter Soldier, at his “command.” The display gets them in to see Selby, and she lets slip that a Dr. Wilfred Nagel is behind the new serum. Before they can barter further, Sam gets a call from his sister Sarah, and an already-suspicious Selby insists he answer it on speaker. Sam steers the conversation with Sarah well enough, suggesting that their situation with the “bank” had to do with money laundering, but when one of her kids in the background cries out for Cheerios, well, the jig is up. But before Selby can have her men put Sam down, a bullet from somewhere zings by and fells her.

Sam, Bucky and Zemo scramble, seeing as a bounty was instantly placed on their heads for Selby’s murder. Once outside, they run into the “guardian angel” who shot Selby — Sharon Carter, the former S.H.I.E.L.D. agent who is bitter about having to live off the grid, now in Madripoor, ever since the events of Civil War. That said, she invites everyone to her place and gallery in High Town, to lay low.

The next morning, Sharon leads the guys to the docks, and shipping container 4261. Though it appears to be empty, Zemo finds a fake wall, and he, Sam and Bucky follow the stairs beyond it to Nagel’s secret lab. Sharon meanwhile stays outside to fend off wave after wave of hungry bounty hunters. Nagel eventually gives up that he had been recruited by the CIA to work with blood samples from a test subject (Isaiah Bradley) to recreate the Super-Soldier serum. Nagel boasts that his version is more subtle, simply “perfect.” Alas, the Snap dusted him before he could complete his work. Once he came back, the thus-far-unseen entity known as the Power Broker was more than happy to fund his research, to the tune of thus far 20 serum samples delivered to Karli. When Sharon barges in to warn that they’re out of time with more and more bounty hunters outside, Zemo uses a gun he pinched to put a bullet in Nagel’s head. He then disappears amid the commotion caused by a rocket launcher fired from outside. Sam, Bucky and Sharon make it outside to engage in a firefight, but just as they all run out of ammo, Zemo masks up and saves their bacon. Moments later, Zemo pulls up in an appropriated convertible to whisk them to safety. Sharon, though, opts to peace out, reminding Sam to get her the pardon he promised.

Sharon, though, has secrets of her own, as we see her meet up with a stealthy-looking female agent-type, and warns, “We’ve got a big problem. A couple of them, actually.”

Meanwhile, with the Flag Smashers…. Staking out a GRC station in Latvia, Dovich invites Karli to mourn her mother, Donya, who had just succumbed to tuberculosis. “We don’t have to do this now,” he suggests, but Karli maintains, “Yes, we do.” “The world is ours” now, she attests, and they must use that position to help all the kids in the repatriation camps. And now that, with Nagel’s death, they possess the last of the Super-Soldier serum, the Power Broker is no longer a threat but instead will come begging to them. That night, they raid the place of their overstock of supplies, before triggering a car bomb outside its front door them surely took innocent lives. Dovich is taken aback, but Karli insists “it’s the only language they understand.”

As NuCap and Battlestar investigate Zemo’s prison break and Bucky and Sam’s undoubtable role in it, and now desperate for their own leads, Walker suggests they go off-book and target the two Avengers. Battlestar has his concerns, but NuCap argues, “If we get the job done, do you think they’re going to sweat us on how?”

In Latvia to follow their latest lead, Zemo explains to Sam and Bucky how Sokovia was cannibalized by neighboring territories after Age of Ultron, and basically was “erased from the map.” Arriving at their destination, Bucky breaks away from the other two to go for “a walk.” But once he’s alone, we see that Bucky had taken notice of a vibranium bead on the sidewalk… and then another… all leading him into an alleyway. “You dropped something,” he says, before pivoting to come face to face with Black Panther‘s Ayo, second-in-command of the Dora Milaje (played by Florence Kasumba).

What did you think of Falcon and Winter Soldier Episode 3?