The Juilliard grad, who is best known for her role as prison inmate Taystee on Netflix’s Orange Is the New Black, grew up in a small church in Simpsonville, South Carolina. And that’s where she first saw a poster of Mahalia Jackson in all her glory. (Mahalia premieres this Saturday, April 3 at 8/7c on Lifetime.)

“There were posters on the wall of Martin Luther King Jr. and a few other Black heroes, but she stood out to me because of her skin and because of her round face and her smile,” Brooks says. “I didn’t even hear her voice yet. In that moment, I saw myself. I feel like that was my first connection to her, just seeing her face. And that’s why I always like to talk about how important it is for representation.”

“Who’s to say if I didn’t see that poster as a little girl in my church, that I would have even made the connection and said, ‘Maybe I can be like her’?” she adds. “I’m grateful that I was connected to her and discovered her through church.” 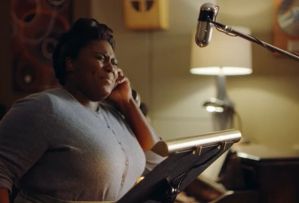 Brooks — who, like Jackson, got her start singing in the church — will certainly help viewers feel like they’re seated in a pew when they hear her rich contralto voice. The actress, who won a Grammy for her singing in the Broadway musical revival of The Color Purple, performs the majority of Jackson’s songs live in the film. While she doesn’t capture all of the legend’s twangy notes, she certainly channels every soulful moan and hum.

Often referred to as the Queen of Gospel, Jackson’s 40-year career allowed her to sell millions of albums and break down social and racial barriers. All of this is tracked in the made-for-TV movie, as is the New Orleans native’s generosity, social activism, health issues and marital woes. There’s even a nod to her beauty salon. While her undeniable influence on everyone from Brooks herself to Aretha Franklin and Patti LaBelle can be gleaned, the film also shows how Ma Rainey and Bessie Smith helped to shape Jackson’s style of singing as well.

“When it came down to stepping in her shoes, I had to grab onto faith, because I had to sing all of these songs,” Brooks says. “I’ve been following her, studying her, watching every YouTube video and reading everything that I could possibly read, just getting my hands on pictures. Pictures tell so many stories. I’ve just been soaking her up for years.”

Some six years ago, Jennifer Hudson, who played Shug in the Tony-winning The Color Purple opposite Brooks’ Sofia, told Brooks that she sounded like Jackson when she sang, and the seed was planted. Grammy-winning stage great Jennifer Holliday would later pay Brooks a similar compliment. So by the time Mahalia director Kenny Leon approached Brooks to play the role, everything clicked, she says.

“I was like, maybe God is telling me I should really think about playing this person,” Brooks says with a chuckle. “I’m grateful I got to do The Color Purple, because that gave the world the knowledge that I can sing, which a lot of people didn’t know. And by the grace of God, Kenny Leon called me, and it just felt right.” 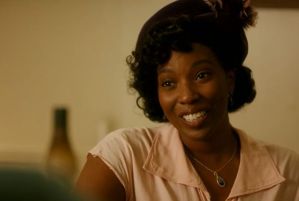 Brooks and Leon (Lifetime’s Steel Magnolias and Netflix’s American Son) had worked together previously on his Shakespeare in the Park production of Much Ado About Nothing. Olivia Washington (Lee Daniels’ The Butler), whose famous Oscar-winning father Denzel Washington has also worked with Leon, co-starred in the Shakespeare adaptation as well. Now she has reunited with Brooks and Leon in Mahalia, too. She plays the singer’s best friend Mildred.

“I had such a great experience working with him on that,” Brooks says of the Tony-winning Leon. “I knew that I was going to be in good hands.”

Leon is equally ecstatic about Brooks.

“She is a serious triple threat,” he gushes. “There are a lot of actresses out there, but she has an authenticity and a truth barometer that challenges every director. She just goes for the truth every time. I knew that the Mahalia Jackson story needed an actor who could sing, and she is an actress who can sing. And I am so proud of her.” 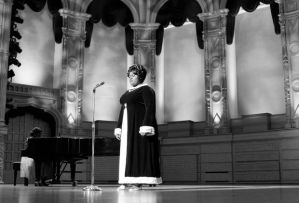 Leon says he’s also proud of the fact that Mahalia is airing Easter weekend as well as one day before Martin Luther King Jr. died. Jackson was a close family friend of King and his wife, and their bond is explored in this small-screen biopic.

“The fact that this film is coming out the day before Dr. King was killed is destiny,” Leon continues. “As a storyteller, I’m excited. I’ve never seen anything like what Danielle does as an actress in this story.”

For Brooks, Mahalia is simply a long-overdue dramatization of a very worthy icon’s amazing life. “I come from South Carolina, where Viola Davis and Chadwick Boseman came from,” Brooks says proudly. “I have a responsibility to match them. It’s really an honor to get to tell this African-American story of an ordinary woman who could do extraordinary things. We have to continue to remind people of that, the power of Black women and what we add to the fabric of America.”