NBC’s Manifest opened its third season with a discovery that, quite frankly, blew Ben away, while the Stones’ latest (and very intense) calling led Mikaela to an oddly MIA 828er.

As seen days upon days ago in the First 5 Minutes sneak peek that TVLine delivered to you (free of charge), the action picked up three months after the Season 2 finale, with Ben prowling some docks in Havana to find the Tesoro di San Antonio (the subject of Cal’s latest drawing). But just as he finds the unassuming docked boat, an intense calling strikes him, Cal (back at home) and Michaela (honeymooning in Costa Rica) — in which the three of them plus a female stranger are cupping their heads while in extreme pain. A three-way FaceTime confirms the shared experience, after which Mick works with Cal and Olive to ID the female stranger as Angelina Meyer, a Flight 828 passenger who never replied to any outreach. Afterward, Cal shares his unease about the new calling, telling his Mom that he believes they were all “about to die.”

Ben meets the owners of the Tesoro di San Antonio, asking (and easily confirming) that they did, in fact, find something “unusual.” After Ben proffers a wad of cash, they lead him to a storage area and lift a tarp to reveal the Montego Airlines tail fin they dredged. As a local urchin secretly iPhones the moment, Ben goes to touch the tail fin and upon making contact is immediately launched backward by an unseen force. When Ben comes to, he and the boat owners talk/joke of “magic,” while cops outside take notice of some kids marveling at the video of the moment. As the cops make a beeline for the storage shed, we realize that Ben is actually working/on comms with a nearby Vance and his colleague Emmett. The lead policeman finds Ben and shows the video, then insists he touch the tail fin again. Ben reluctantly does so, but this time nothing happens. Afterward, Vance and Emmett get the drop on the cops, then ziptie them before absconding with the tail fin. 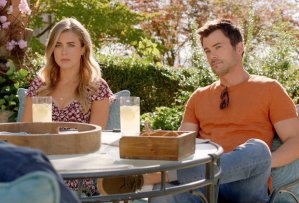 Mikaela and Zeke meanwhile follow leads on Angelina Meyer, first talking with her very religious parents, who conveniently live just two hours away from the newlyweds’ honeymoon destination. They say that after Flight 828, Angelina “no longer carried God’s light” and quite possibly was losing her mind. It’s been months since they saw her, they claim, before suggesting she went back to New York. (And yet Alonzo, a Vance-appointed tech guy that Saanvi is now covertly working with in the back room of a mild-mannered clinic, says there are zero signs Angelina ever returned to the States.) Mick and Zeke then chat up a local girl who Angelina was friends with. Elena says that when she last saw Angelina, months ago, she was acting paranoid. Cut to: the young woman from the Stones’ calling, cowering inside a dark, cramped closet, where she is reaching for the knife that came with a meal that was slipped to her….

While Ben, Vance and Emmett (somewhat amusingly) whisk the giant tail fin to their cargo plane, on the back of a jalopy and with the cops in hot pursuit, the action cuts back and forth with Mikaela and Zeke revisiting Angelina’s increasingly fishy parents. When Mick asks to use the loo after being walloped by a calling, Zeke “feels” that she needs his help, so he pretends to pass out from his own “calling,” distracting everyone long enough that Mick can snoop around and locate a distraught Angelina, who is being kept inside a cellar closet.

In the end, Vance takes one for the team and lets himself and the tail fin be grabbed by the cops, while Ben and Emmett race onto the cargo plane. With Angelina wishing to return to the States with Mick and Ben, Alonzo arranges for the three of them to hitch a ride with Ben. Later, they all arrive at the Stones’ home, where Cal tells Angelina, “I’ve been waiting for you” (and in anticipation of her arrival/need to crash, cleaned out his room). 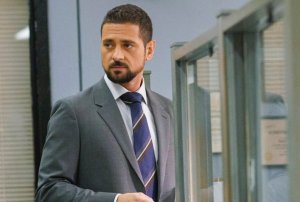 Meanwhile at the NYPD…. Jared introduces himself to Sarah, a woman had been waiting for a while to speak to Mikaela about her mother’s disappearance. Sarah’s mom worked for the government and used to send her coded messages (using roses) about when she might be home — and it’s been three months without a peep. Since her mom’s work seemed 828-centric, Sarah wanted to speak to Detective Stone. But in Mick’s absence, Jared agrees to do what he can — and we see that the MIA mother is the Major, whom Saanvi accidentally-ish killed in the Season 2 finale!

That night, Ben and Mick puzzle over the impossibility of the found tail fin — and how, Ben suspects, it and the latest calling tie into his previous calling about 828 exploding mid-air. “I think it’s trying tell us we died on that flight,” he posits. And now a piece of the plane is back “as if it was resurrected. And I think we were, too.” Mikaela asks, “So, what does that make us? Angels?” “I think we’re about to find out,” Ben answers.

In the kitchen, meanwhile, Zeke senses that Cal is worried about something — and the lad confesses that he is having the same feeling he had when the three “shadows” were in the picture. Cut to a flyover shot of the thawed lake into which the Meth Heads plummeted in the Season 2 finale, but never were found. And just then, one, two, three bodies pop-pop-pop! to the surface, one of which opens its eyes and loudly gasps!