After last week’s promo, we all knew that Thursday’s Grey’s Anatomy would be bringing back Chyler Leigh as the late, lamented Lexie Grey. The question was, would she — and surprise companion Eric Dane’s Mark Sloan — be sending Meredith forth, as in getting her off that damn beach already and returning her to her family and friends? Read on and, if you don’t know by now, find out.

‘WE ARE DOWN TO OUR LAST FOUR VENTILATORS’ | As “Breathe” began, Mer was joined on the beach by Lexie. Meanwhile, in reality, Maggie, Mama Ortiz and Levi treated Marcella, whose daughter Veronica was also at Grey Sloan suffering from the effects of COVID. Nearby, Jo continued to bond with Luna and tended to Irene, Cormac’s sister-in-law, who was both at high risk for coronavirus owing to her MS and, as an added bonus, had a kidney stone. Maggie was feeling some pre-separation anxiety over the fact that Winston was due back in Boston. And finally, Richard reported to Team Grey Sloan that they only had four ventilators left, so they were all going to have to think creatively. Did they ever not? 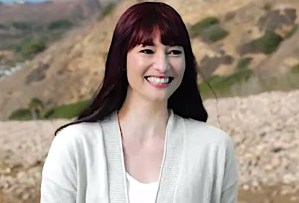 Back on the beach, Lexie asked Mer if she was going to remain on the beach. “It takes some getting used to,” Lexie admitted. Aw, and just as she copped to having loved rules, Mark showed up to affirm that oh yeah, she had. There was some more talk about the sand not having been real. Then Mer confirmed that on her beach, the star-crossed lovers got to be together in the end. “I like it here,” Grey said. We could see why. Mark told Mer that he often yelled as best he could at his loved ones to wake up, not waste a moment. Then he gave them credit for coming up with the idea. Later, Lexie challenged Mer to find things, even in a pandemic, to enjoy. And what did she savor? Stuff like little Bailey face-planting in his birthday cake (and Zola laughing so hard at it that she peed her pants). 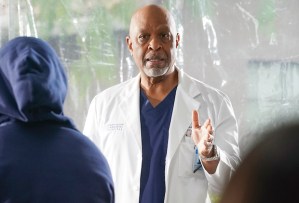 ‘THAT IS IMPOLITE ADULT CONVERSATION’ | Back up and at ’em, Tom crossed paths with Owen. At the same time, Teddy brought Leo and Allison to Mer’s, where Amelia suggested that they could have tea and not be covered in puke for an afternoon. Watching the kids, Amelia added that Teddy’s grief over DeLuca might ease if she shared it. In turn, Teddy asked if there was a recovery program for people who aren’t addicts who still blew up their lives. At the hospital, Owen texted with Cristina, who insisted on receiving a photo of Mer’s monitors. And, after Link scrubbed in with Richard, Webber pitched a fit because they were now down to their last damn ventilator — they’d have to shut down the trauma unit. (Yep, it was a zippy episode!) 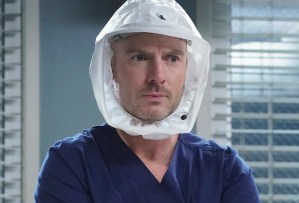 ‘THIS IS NOT A CATASTROPHE, IT’S A COMPLICATION’ | After ascertaining Irene’s condition, Cormac floated the idea of having Catherine scrub in. His kids had already lost their mother, he didn’t want them losing their aunt, too. “He pulled the biggest” strings, Catherine said after showing up. Irene was worried that her treatment would go the way of her late sister’s. But Catherine assured her that she wasn’t just in good hands, she was in the best ones — hers. As Irene was wheeled into surgery, she teased Cormac about Mer… until she found out that Grey was in dire straits. Operating on Irene, Catherine encouraged Jo to consider urology. Just as they were finishing up, they discovered that Irene was far worse off than they thought — her ureter came out with the kidney stone! 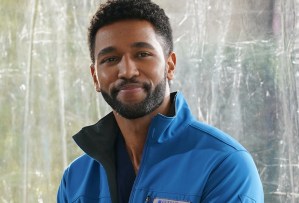 ‘SAVE MY BABY GIRL!’ | As Marcella’s condition deteriorated, Veronica was consulted about next steps. However, she was hardly in any condition to advise on them. “Save my baby girl!” Marcella pleaded. “Save my mom!” Veronica pretty much said when it was her turn. She then went on to blame herself for showing up and hugging her mother on her birthday. “And it might’ve killed her,” she added. Sweetly, Alma assured Veronica that her mom would never regret that embrace. Before we knew it, Veronica was found near collapsing on her way to the elevator, and Maggie and Jackson were trying to keep her alive. At the same time, her mom began crashing after Levi rapped for her. “No, no,” Sara pointed out, “that is not rap.” 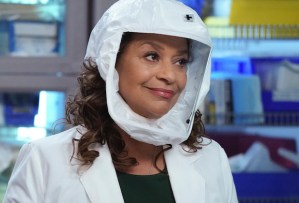 ‘CHILD, WHO THROWS AWAY A KIDNEY?’ | Alas, Schmitt and Sara had no sooner intubated Marcella than they learned that there was no ventilator for her. Cornered, the doctors decided to give Veronica the ventilator, respecting Marcella’s wishes. Outside the hospital, Maggie told Winston that if she’d known she’d have to choose between giving a mother and a daughter a ventilator, she’d have quit med school. Just then, it occurred to her that the same way she and her beau shared ear buds, maybe Marcella and Veronica could share a ventilator. “I just have to dance,” Richard exclaimed, because he could reopen trauma and give his daughter a raise. Of course, the whole situation weighed heavily on Alma and Sara. As Jo hollered at Catherine about leaving Irene with only one kidney, Jackson’s mom shut her right up. “I’m putting it back, Wilson!” Duh! Afterward, Cormac thanked Jo for… well, just thank you. “She single?” asked Irene, who was keen on Alex’s ex. It didn’t get much more intimate, after all, than having your kidney in somebody’s hand! 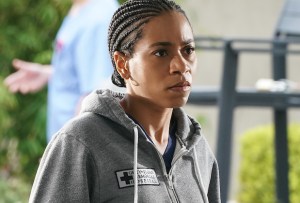 ‘IT’S A YES!’ | As the hour drew to a close, Mer was extubated. But, were Lexie and Mark able to send her home? At that very moment, she was going on about all her loss and pain. What caused the pain? Mark asked. Grey hated him knowing things that she didn’t. She just didn’t want to say it. Lexie didn’t mind, though — the depth of pain was equivalent to the depth of love. Mer couldn’t resist change. Nor could she really miss them. They were right there with her, often yelling in her ear. Don’t waste your life, they urged her. And as everyone at Grey Sloan began to boogie, it became clear that Mer was breathing on her own. Maggie even liked her job again! She’d been inspired by Winston — and them. She was saying that she didn’t want him to go back to Boston when he opened up his earbuds container to reveal an engagement ring. “I can’t imagine life without you anymore,” he said, “and I don’t want to try. Margaret Pierce, will you marry me?” In response, she said an ecstatic yes. That night, Owen was able to tell Zola that her mom was off the ventilator. He even gave Teddy the credit.

So, what did you think of “Breathe”? Lexie’s visit? Mark’s surprise appearance? Winston’s proposal? Hit the comments with your reviews.