When the late Lexie Grey visited Grey’s Anatomy‘s Limbo Beach this Thursday night, it turned out she was not exactly alone.

Shortly after Lexie (played by former cast member Chyler Leigh) greeted big sis Mer, who has been dilly-dallying in the idyllic mindscape whilst battling a case of COVID-19 back at Grey+Sloan, the two were joined by dearly departed Mark Sloan.

It was suggested that Lexie and Mark were “back together” in the afterlife. Or something. Mark also shared how, from the great beyond, he has tried his darndest to give counsel to Callie and Arizona, and their daughter Sofia. 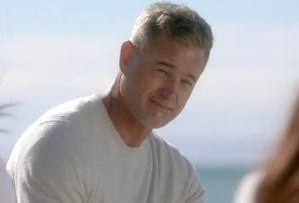 Dane first joined Grey’s midway through Season 2, as a blast from Derek and Addison’s past (given that he was with whom the latter had had an affair). Years later, Mark was in the same small-plane crash that killed Lexie, though he would not succumb to his injuries until two episodes later (as part of the Season 9 premiere).

Dane went on to front the TNT action-drama The Last Ship for five seasons, as Captain Tom Chandler, and co-star on HBO’s Euphoria.

Lexie and Mark’s arrival on “Limbo Beach” continues a nostalgia-filled theme for Season 17, ever since Meredith contracted COVID and was put on a ventilator; during this time, the show’s title character has been visited by the likes of late husband Derek (played by original cast member Patrick Dempsey), late BFF George (original cast member T.R. Knight), and an ill-fated DeLuca (Giacomo Gianniotti).