Let’s just say Chester’s admission of love to guidance counselor Sam did not go well. Despite how truly heartbreaking it was when our typically animated lead discovered his feelings were unrequited, let’s face it: it was a truth the boy had to learn sooner rather than later.

In the first moments of Generation‘s Part 1 closer (now streaming on HBO Max), Chester, in as plain of clothes as we’ve ever seen him, looks completely demure and destroyed. He runs into Sam at school, who tells him he’s been assigned a new guidance counselor because Sam wants him to have someone to talk to. The sting, according to the look on Chester’s face, is still very, very real.

When Riley tries to talk to him, he tells her he’s sick of being “all Mary Poppins” for everyone. But she’s worried, since her friend isn’t returning anyone’s texts and no one knows why he pulled the fire alarm at the motel during their class trip. He remains mum and shrugs her off.

Chester heads to the roof for some alone time only to meet Bo, a student he’s apparently shared three classes with but doesn’t remember. Chester tells him he was suspended for four days, and, for some reason, decides to open up to this new friend. The two seem like entirely different people, but under the surface, there’s some undeniable chemistry brewing. 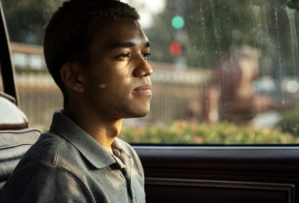 Recognizing that Chester’s down in the dumps, a few jocks start a “shirts off for Chester” dance party, and seeing his fellow student body rally around him finally puts a smile on his face. With his spirits lifted, he texts his new friend, asking if he wants to hang out sometime.

Meanwhile, Nathan’s feelings for Chester are about to boil over, so he leaves Chester a loooong rambling voicemail that’s all sorts of cringe. (I was under the impression that Gen Z didn’t know how to make actual phone calls? Someone please confirm or deny, thanks.)

We then return to the mall with Naomi, Delilah and Arianna which is, of course, exactly where the series began. We rapid-fire cut to the present, where the entire gang meets up to help Delilah as she figures out how to hand the baby over to authorities. Chester brings his old baby carrier, and kindly serenades the newborn with a Rockabye Baby-style rendition of Megan Thee Stallion’s “Savage.” (It’s good to teach ’em young, no?)

It’s the middle of the night when Megan calls Naomi in a panic. The video of Arianna, Chester and Nathan triple-kissing accidentally uploaded to the family’s shared iCloud. Megan facetimes the brother and sister, and she’s beyond angry, but her over-the-top reaction seems to quell the lingering tension between Nate and Naomi. “We’ll get back in touch with you,” Naomi tells her mom before ending the call. As Nathan says: “I-con-ic!”

Before they hand the baby over to a fire station, Delilah gives the child her favorite shirt. Chester tucks his bracelet into the car seat. Everyone else follows suit, leaving an item of theirs with the baby, so the child will know he or she was loved. (Not sure how a 20-spot and bottle of CBD drops is gonna help a newborn, but it’s the thought that counts.) With that, Delilah and babydaddy J give the child to a fireman who “was f–kin’ hot,” Arianna says. Delilah finally cracks a smile through tears.

In the episode’s final moments, Chester checks his phone for a text from Bo, who replies that he does indeed want to chill. Meanwhile, Riley types, “I miss us” in a text to Greta, but doesn’t appear to hit send. Emotions of all sorts run high as the kids hitch a ride in the back of Greta’s truck, the sun rising up slowly behind them.

What did you think of Generation‘s Part 1 finale? Grade the episode below, then tell us your thoughts in the Comments!