Current Grey’s Anatomy and Station 19 showrunner Krista Vernoff — who cut her showbiz teeth working as a writer/producer on the original WB drama from 2000-2004 — reveals that a Season 5 arc that featured Alyssa Milano’s Phoebe morphing into a mermaid marked a turning point in the auteur’s career. It also paved the 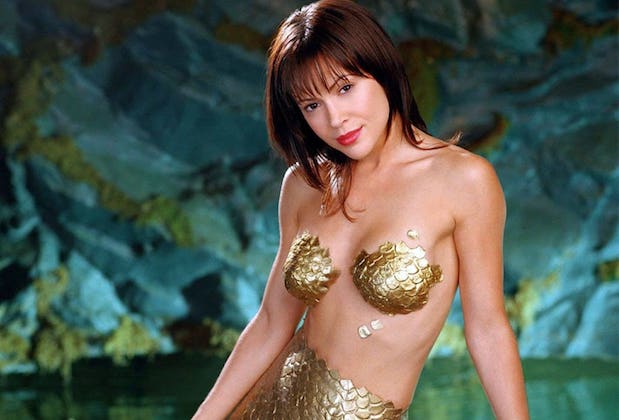 way for her eventual exit the following season.

“I signed on because Charmed was a girl-power show,” Vernoff recalls to The Hollywood Reporter in a candid profile, “and about halfway through there was an episode where Alyssa Milano comes out in mermaid pasties and there was a huge spike in male viewership. And then every episode after, the question would come from the network, ‘How are we getting the girls naked this week?'”

When it came time to decide whether to stick around for Season 6, Vernoff — who at the time was also reeling from the untimely death of her father — says she ultimately followed her conscience. “They were throwing money at me, and the number keeps going up, and there’s all this pressure,” she explains to THR. “And all I can think is, ‘I’m creating something that’s now bad for the world, and I’ve had enough bad for the world in my life.'”

UPDATE: Shortly after we published this piece, Vernoff took to Twitter to issue the following clarification…

I want to clarify here for Charmed fans and also for my colleagues from Charmed who I love and admire, that I do not believe that the show was bad for the world. I felt that the objectifying notes were bad for the world – and were demoralizing for me. All love to Charmed. https://t.co/IIEqjgIlBp