As Zenon would say, Bucky Barnes is in crisis mode major on The Falcon and the Winter Soldier.

After decades of being brainwashed to murder against his will, he’s finally processing what’s been done to him through private sessions with his court-mandated therapist, Dr. Christina Raynor, played by Amy Aquino. Although Bucky isn’t exactly receptive to her — he lies about his nightmares and rails against her attempts to get through to him — Raynor is determined to help the ex-assassin before it’s too late. Given her past military experience and bouts with PTSD, she knows how bad things can get.

“That’s why she sees her job with Bucky as a life-and-death thing. If anybody’s likely to have PTSD, it’s probably the 106-year-old soldier who was made to kill people that he actually liked and believed in,” Aquino tells TVLine. “She just sees him as a person who needs help because she knows that when she went through it, she wasn’t a soldier, and she was just having to deal with these memories and having to find a way to hang on to herself and her humanity, despite the things that she was forced to do.”

Raynor is given one last chance to help Bucky before he embarks on a global mission alongside Sam to stop the Flag Smashers, who’ve created new Super Soldiers with a special serum. In a memorable scene during Episode 2, Raynor held an impromptu therapy session with both Bucky and Sam in jail — Bucky was arrested for missing a session with Dr. Raynor — with the hopes of planting the seeds that will allow Bucky to finally let down those metaphorical walls he’s been holding up. 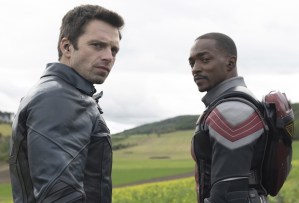 “She uses Sam as the chink in the armor because this is a person he has a relationship with, and they had this shared relationship with [Steve Rogers’] Captain America, which is obviously the pivotal relationship in Bucky’s life,” Aquino explains. “She uses Sam as the battering ram to get through his armor, and it kind of works. It’s only the beginning because that’s the only time she has, but knowing that he and Sam are going to be working together, she can hope that they keep opening up.”

Without her regular office space or the usual tools to work with, Raynor relied on a couples therapy format to get the superhero duo to begin opening up to one another. According to Aquino, the humorous scene was just as fun to film as it was to watch, thanks to her co-stars Anthony Mackie and Sebastian Stan’s superb improvisational skills.

“Everybody was having fun with it,” she shares. “It was the moment that you could have fun with, but then they were able to let it go where it had to go, which is the big revelation that Bucky has. My biggest challenge was not stopping them too early because [director Kari Skogland] was letting them improvise. It would be insane not to with these two guys who are so smart and have such a strong relationship, because that’s where all of this gold was coming out.”

With the Falcon and the Winter Soldier headed out of town, Raynor’s 20-minute session will have to suffice for now. Whether or not she’ll return to provide more aid remains to be seen.

“Raynor sees that as likely her last chance with him,” Aquino concludes. “But, obviously, this universe is wide.”

Do you think Bucky needs more sessions with Dr. Raynor? Let us know your thoughts in the comments! Plus, see what Sebastian Stan had to say about Bucky in the video below.