Warning: This post contains spoilers from Wednesday’s Chicago P.D. Read at your own risk.

Adam Ruzek could really use a hug right now.

This week’s Chicago P.D. put the Intelligence cop through the wringer after his father was kidnapped by local gang members over a large gambling debt. The episode revealed that Disco Bob Ruzek (guest star Jack Coleman) had been taking drug money for years while on duty as a cop to subsidize his gambling addiction, and that fact alone would have ruined the family’s reputation if it were ever made public.

Although Ruzek, with help from his team, was able to rescue his father and preserve his family’s reputation, his relationship with Burgess isn’t faring so well. The hour ended with the brooding officer drinking alone in the dark after a fight with Burgess who, in a split second, suspected him of possibly murdering their prime suspect in order to protect his family’s name. Their conversation mirrored Ruzek’s heated exchange with Atwater several episodes back over what kind of man Ruzek is and what he’s capable of.

According to Patrick John Flueger, who plays Ruzek, having his character questioned by those closest to him is taking its toll. 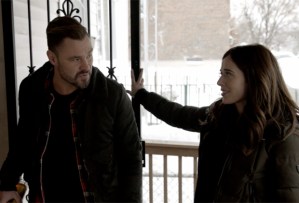 But Ruzek sees things differently. “He’s like, ‘How do you not know me better than that? How could you not know what my intentions are like?’ I think that’s what’s so confounding. She doesn’t come up and say, ‘What happened?’ She comes up and says, ‘What did you do?’ and that is not a question. That is an accusation, and I think he is offended,” Flueger explains.

“That’s why you’re seeing this man sit alone, slugging back whiskey. He just bent over backwards to fix his father’s situation and put himself on the line for that and sullied himself in his sergeant’s eyes, all to help his father. So now his father figure [Voight] may be not the happiest with him, and his best friend [Atwater] has been questioning him recently, and now the girl that he’s madly in love with, the love of his life, is accusing him of murder.”

That somber final scene, which Flueger describes as Ruzek’s attempt to “numb himself to his loneliness,” speaks to Ruzek’s currently disheveled state. (Flueger also filmed an alternate take with Ruzek listening to Majical Cloudz’s “Downtown,” which was left out since Dick Wolf shows usually stay away from contemporary music.) While his argument with Burgess leaves their potential reconciliation up in the air for now, Flueger is still rooting for “Burzek” to find their way back together.

“I think they’re both professionals. They’re going to work fine together, [but] probably a little avoidance,” he notes. “I think that it’s his intention to get over things as quickly as he can, but there [are] gonna be walls up now. ‘No more available Adam. Our relationship has changed, [she] shifted it. We’ll be cool again, but I don’t know if we’ll ever be close again’… this is where he is right now.”