Some actors are born to play the roles they inhabit. And that’s certainly the case with Matthew Willig, who brings depth and tenderness to his turn as Andre the Giant on NBC’s Young Rock.

Fans of the show got a taste of the former NFL offensive tackle’s range in this week’s installment, titled “My Day With Andre.”

In it, the wrestling great hangs out with a 10-year-old Dwayne (Adrian Groulx), aka Dewey, and takes him to the movies when his parents can’t. But first, they stop by the park and feed the pigeons, allowing both Andre and Dwayne to impart bits of wisdom to each other. For instance, Dewey tries to shoo away a portly pigeon he perceives as greedy. But Andre favors and defends the bird. Later, Dewey explains that like that pigeon, Andre isn’t too big; the world is just too small. 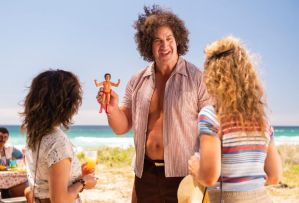 “Obviously, being my size, there are few roles that come along where I can say, ‘That’s right in my wheelhouse,'” Willig tells TVLine with a chuckle. (His past roles include Birds of Prey and Charmed.) “You add in me gaining weight and learning some French, and I definitely committed. But you never know how people are going to perceive it.”

Reception to Willig’s performance has been considerably positive, with Dwayne “The Rock” Johnson, whose life the NBC sitcom is based upon, praising him publicly.

“I’m humbled and thankful Dwayne gave me the chance to play this role,” Willig adds. “It was the right fit, and I knew that it was going to be a good fit, even though I’ve said that numerous times in my career. So to have this happen and have Dwayne believe in me and even post about it on social media means the world.”

To fill Andre’s considerable shoes, Willig packed on 35 pounds and sports a curly wig. “I wish I had that much hair,” he confesses. He even worked with a dialect coach. And while the Southern California native isn’t quite as tall as the late, great Andre — the wrestler was 7 foot, and Willig is 6’8″ — he knows what it’s like to be a big man in a small world.

“People ask me all the time how I don’t hit my head on doorways,” Willig says. “I’ve learned to just adjust. It’s the same thing when I go to the movies. I know, or I’m very aware, that if I’m sitting in front of somebody that needs to see, I’ll just slouch down.” 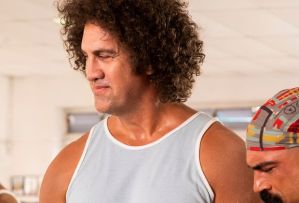 On Young Rock, Andre doesn’t duck down at the movie theater, and the people behind him have to bob and weave for comedic effect.

“It’s just one of those things I automatically do,” he continues. “I’m always very aware of my surroundings, as far as that goes… I don’t even think about it anymore. It’s automatic. Being recognized a little bit and being really large, just walking around in a Las Vegas casino, for example, there are tons of people standing there, and you can see and feel them looking and talking about you as you walk by. Especially after I got into this business, I realized how tall I really am, because the smaller you are, the easier it is for production and camera crews and all that stuff. I do sometimes feel like I am a big man in a small world.”

As for “My Day with Andre,” Willig credits his young screen partner Groulx for being such a consummate professional. 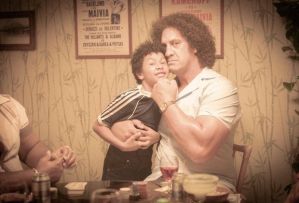 “It was a really sweet episode, and it was a culmination of little Adrian and I having a nice relationship together and building that over the couple of months leading up to shooting that,” says Willig, the father of two daughters. “I think the kid is amazing. I love that kid. He’s so talented. When we’re sitting there talking, it really is kind of a nice chat. I was able to see the episode myself, and I’m really happy the way it came out and happy with the way that it feels. He’s teaching me, and I’m teaching him, and it’s a nice moment.”