Ah, the cycle of life, The Voice style: No sooner had Blake Shelton, Kelly Clarkson, John Legend and Nick Jonas filled up their teams in the Blinds than… members of said teams began being cut in the Battles. Who became Season 20’s first casualties of the duet-or-die rounds? Read on, and all will be revealed as we discuss not only the performances but former Comeback Stage coach Kelsea Ballerini (filling in for an ailing Kelly) and Battle advisors Dan + Shay (Team Blake), Luis Fonsi (Team Kelly), Brandy (Team Legend) and Darren Criss (Team Nick)…

Team Kelly: Ryleigh Modig (Grade: B+) defeated Gean Garcia (Grade: A-) on “pov” — Gean stolen by John | In the studio with international Voice vet Luis, the kids’ coach (present for rehearsal, just not showtime) praised their quirkiness and individuality. Gean wisely suggested going acoustic with the band — a motion Kelly enthusiastically seconded; all the better to hear their breathy vocals! On stage, sounds came out of Gean that made it seem as much like he was playing an instrument as singing; he was spectacular. As for Ryleigh, hearing her was, as Gean put it, like tasting honey. There was also a hint of urgency to her voice that made it feel like love itself. Though she probably has greater range than Gean — and Kelsea dinged him on an early pitch issue — I’d still have to give him the win; he reeled me in not only with his voice but his stage presence. The guy was living it!

Team Blake: Connor Christian (Grade: A-) defeated Aaron Konzelman (Grade: B) on “Ain’t Living Long Like This” | Before running through the number with Dan + Shay, whom Blake called the first artists he’d ever mentored, Aaron was stoked about the song that they’d been assigned; it was right in his wheelhouse, he figured. Connor was considerably less comfy with the country classic, perhaps with good reason. Aaron’s tangy voice cut through far more immediately than Connor’s deep, husky one. But in the moment of truth, Connor came bursting out of the gate like a speedster with its pedal to the metal. The dude was unstoppable. Aaron was terrific, but Connor, man… aside from a dicey high-note toward the end, the guy was on fire. He not only sounded — in a good way — like a wrecking ball tearing through a barn, he was a freaking blast to watch. I know the show’s called The Voice, but at this point in the competition, we enjoy a performance as much with our eyes as our ears, no? 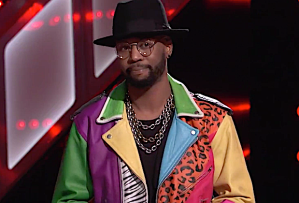 Team Legend: Dana Monique (Grade: A-) defeated Devan Blake Jones (Grade: B) on “Stuck With U” — Devan saved by Nick | In the rehearsal room with “Bonus Jonas” Darren, Dana tearfully revealed why, even after John sang to her during the Blinds, she chose Nick to be her coach: He’d sensed in the sometime background singer that she had something to prove. Meanwhile, Devan was made nervous by the fact that they weren’t practicing with a full band; singing with just a piano made him feel vulnerable. Also intimidating him was Dana, whom Darren called “a walking hurricane” and someone he’d find compelling even if she didn’t sing — she’s just. That. Charismatic. Sweetly, Nick encouraged Devan to work on his confidence. On stage, Dana blew the doors off the place with the same casualness you or I might use to order takeout. She’s the definition of a powerhouse. And Devan? Duly inspired by Nick’s pep talk, he turned out a performance that was more assured than we might have initially expected — almost as bold as his amazing jacket. Still not really a contest between the two of ’em, but he acquitted himself admirably.

Team Legend: Pia Renee (Grade: B-) defeated Christine Cain (Grade: C) on “Baby” | Before hearing the teammates rehearse, I had a feeling that this Battle was Pia’s to lose; Christine’s Blind hadn’t really wowed, whereas Pia was like a vocal grenade — she just exploded behind the mic. After a tryout in the studio, advisor Brandy was wholly sold on what the twosome were doing — this, she said, was the grownup version of her old hit. It was jazzy and sultry — to her credit, in large part owing to Christine. Ironically, John was moved to suggest that Pia let her guard down. Was she having a moment of insecurity? WTH? When the spotlight fell on the competitors, they didn’t quite sparkle. Christine sounded OK, she just wasn’t terribly impactful (perhaps because her style, as Blake noted, is “so laid-back”?). On the flip side, Pia, well and truly loosened up, sang with a good deal more oomph. But “disjointed” is the best word I can think of to describe this Battle. Not Pia’s finest hour, but fine enough to earn her the win. 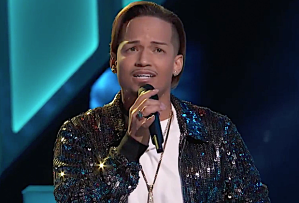 Team Nick: Jose Figueroa Jr. (Grade: B) defeated Awari (Grade: B-) on “You Say” | Though Lauren Daigle’s ballad, Awari told us, was the soundtrack to a season of his life, the song is made for a belter like Jose. Darren was impressed at once with Awari’s “really sexy” register and the “husk” that cut through the music. He also dug Jose’s looseness and ability to pull off theatrical vocal acrobatics. For Nick, it was “neck and neck” before showtime. On stage, Awari dazzled with his vibrato on a vocal that was as sweet as nougat. Jose started off a little shaky, but he recovered. And when they started belting, as strong as Awari was, he couldn’t keep up with “king of the runs” Jose. There was simply no amount of “wideness” to which Awari could open himself that would allow him to match, much less beat, Jose.

Team Blake: Ethan Lively (Grade: A-) defeated Avery Roberson (Grade: A-) on “Just Got Started Lovin’ You” — Avery stolen by Kelsea for Kelly | You’d have thought that four-chair turn Avery would have had the edge going into his Battle with Ethan. But (as if I’m ever right!), one-chair turn Ethan was the contestant who made TVLine’s most-promising auditioners countdown. And the James Otto number did seem to favor the high-school junior’s impossibly deep voice. And nerves seemed to be taking hold of Ethan even during rehearsal. But after the stage run-through, he told his coach that he might just loosen up enough to unbutton his top button. And did he? Why, yes. Not only that, he sounded great and looked like he was having a little fun up there, too. Trouble was, Ethan came off like he was born and raised behind a mic stand. He was a Stetson-wearing fish dropped in water. A super tough call.

So, what did you think of the first Battles? The first cuts? Vote for the singer who gave your favorite performance below, then hit the comments with your reviews.