A husband in jail, a crime boss and the Feds on her tail, plus a hitman who can’t take “no” for an answer? It’s safe to say that Beth Boland’s life is a revolving door of problems that need solving. But on this Sunday’s episode of Good Girls, the mother of four makes a huge play that’s undoubtedly going to shake up her world. Whether it’s for the better or worse remains to be seen.

With Dean not leaving jail any time soon and Beth putting pressure on Fitzpatrick to complete the Rio job, the Boland matriarch is shocked to find Phoebe and Dave at her doorstep. Did she play nice, cop a deal or cough up any incriminating info? Actually, it was a combo of all three, and boy, did things get messy. (Ahem, messier.) Here’s what happened from the top.

Phoebe and “Big Kahuna” Dave approach Beth with a proposition. Of course, they found the hidden message Beth left for Dean detailing her operation. Now, they want her help in setting up Rio — and if she refuses, they’ll round up her entire posse.

Stan, meanwhile, is still running shady side-jobs for his boss, Gene, which include busting skulls (or, yanno, cash registers) and bloodying his knuckles. The toll it’s taking on him is blatantly obvious, and it doesn’t look like he can keep this much for much longer.

Beth pitches assisting the agents to Ruby and Annie. If they help out, they’ll be relocated anywhere in the country they want to go. It’ll be like they never existed, Beth says. But, Annie asks, won’t this entire deal go away if Rio gets whacked? A solid point.

They go to track down Fitzpatrick to call off the hit, but the man has up and vanished. They meet with the guy who connected them to Fitz in the first place. He won’t help them cancel the hit… unless they help him out with something first. He doesn’t want sexual favors (which is what the women incorrectly assume); instead, he sends them shopping, which seems like an odd request, but then again, the man doesn’t have forearms. Panic takes over when they figure out the shopping list is full of bomb-making supplies. Despite their reservations (and there are many!), the women decide to deliver the goods anyway.

Gang guy says he found Fitzpatrick, who will give Beth a call. He then tells them the materials they picked up are for his mom, and they’re colored in surprise when he says they’re actually for a garden to help celebrate her wins against cancer. That’s quite the opposite of their explosive device theory. (“You b-tches are sick,” he tells them.) 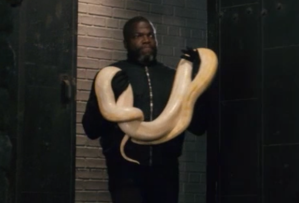 Next, we’re treated to a cheeky montage of Stan tackling odd-jobs (including the theft of a huge snake) and Ruby googling, “Are there Black people in Wyoming?” Stan tells Gene he can’t do it anymore, and asks for his old job back. Gene leaves him feeling hopeful that things can soon go back to normal.

Beth finally meets with Fitzpatrick, who questions why she wants to cancel the contract, until he figures it out. “You cut a deal… I thought you were special,” he says. “I’m a mom,” she replies. She asks him what he’s going to do: “My job.” (Highly doubtful, as there’s no way this show’s going to off Rio, right? Right.)

Beth re-groups with Rio. She tells him the Secret Service agents want him, and he’s not too surprised. She slips him an envelope with what we think is Dave’s photo, and confirms that no one else knows about it. “It’s off the books,” she tells him, and it’s the only way their predicament goes away.

The next day at work, Gene comes through with a police officer who’s looking for a suspect who smashed up a cash register. It looks like Gene’s throwing Stan to the wolves, only boss-man coughs up an alibi for Stan at the last second. When the situation is diffused, Gene tells him to be in the car in 10 minutes. Looks like Stan’s very illegal side-project isn’t quite finished just yet.

On a rooftop, Fitzpatrick moves forward with his plan to take Rio out, following the gangster’s moves in the crosshairs of his sniper rifle. Rio enters a club wearing a dark hoodie, but when the figure comes back out, it’s someone else… and a very armed Rio appears right next to Fitz. Fitz warns Rio about being careful with “a woman like that.” He didn’t think Beth had it in her. “Later, Dave,” says Rio, squeezing the trigger. Fitzpatrick’s head cocks to the side as he utters, “Dave?” The scene cuts away, as we hear a gunshot.

Beth meets with Rio again, telling him the Feds seized everything and that she obviously can’t wash anymore. They talk shop, and as he’s about to leave, Rio mentions her “kahuna” wasn’t looking to put him away, he was looking to take him out. Beth fumbles through a response, but Rio wasn’t born yesterday. Full of suspicion, he walks away.

Did Rio buy Beth’s story about “Dave”? Is Fitzpatrick really dead? Drop some comments below!