A new villain has risen in Gotham and he might be the Bat Team’s nastiest threat yet. Batwoman this Sunday finally introduced the sadistic drug lord known as Black Mask—a guy you’d never want to encounter in real life.

Picking up where we left off in Coryana, this week’s episode revealed that Black Mask is the mysterious figure behind Kate Kane’s kidnapping. He has burned her face beyond recognition and alluded to some other nefarious plans for the former vigilante, who has now been declared dead (her friends and family held a funeral).

“He does have big plans for Kate Kane, and what they are is pretty horrifying,” Peter Outerbridge (V-Wars, Nikita), who plays Black Mask, teases. “When you take a beloved character like that and then you put her in a basement, you torture her, you burn off her face…. It’s just awful. I think the fans are going to be going, ‘Oh, my God.’

“Imagine taking James Bond and just torturing James Bond for hours and hours,” he adds. “Audiences aren’t gonna like Black Mask very much at all. It only gets worse.”

Black Mask’s treatment of Kate may have something to do with his daughter, who he believes was killed by Kate as Batwoman. Outerbridge confirms that revenge might be a factor in Black Mask’s plans for her, “but not in the way you might think. It’s complicated.” While we don’t yet know what he exactly has in store, it’s clear that Enigma (who is the Riddler’s daughter in the comics) will be involved in that.

“Enigma is certainly a big part of the plan,” Outerbridge adds. “But you’re going to have to wait and see.” 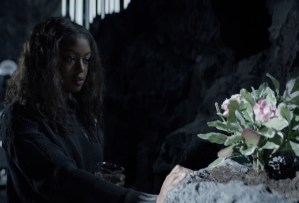 As we’ve seen so far, Black Mask is an extremely violent and vicious criminal with his own ideas on how to improve things in Gotham, a city he views as being rife with corruption. Though he shares that ideology with the new Batwoman — who also believes Gotham needs to see systemic changes — they have entirely different approaches to the issues at hand. Whereas Batwoman looks to better the community through activist work (like helping Sophie’s sister build a community center), Black Mask leans into sheer violence (such as mutilating bodies), and views Batwoman as being no different from him.

“His point to her [in this episode] is that ‘you run around dressed up like a bat  bringing your own justice not based on laws. It’s not based on anything other than what you think is right, and what you think is wrong. Well, what’s the difference between that and what I do?’” Outerbridge explains. “He’s basically saying, ‘I’m just doing what comes naturally to a place like Gotham. The whole city is a cesspool, so why not be the king of the cesspool?’ That’s where his justification comes from. But there’s no question that it definitely feeds into his personality, which is twisted [and] sociopathic.”

He may be known in the criminal world as Black Mask, but to the public he’s just Roman Sionis, the CEO of Janis Cosmetics. This amiable persona is what allows him to walk freely through Gotham while leaving a trail of bodies behind.

“Roman is basically the mask that Black Mask wears in society,” Outerbridge notes. “He’s all about painting false faces on people and making them not who they are so he’s created a symbol of hypocrisy that he wears to maneuver amongst hypocrites. It’s his way of hiding in plain sight. Nobody would suspect somebody who actually thought that Gotham was a really good place, which Roman constantly says. But that’s not the real [him]. The real Roman Sionis is Black Mask.”