Supergirl is coming to an end after six seasons, and we’ll soon be saying goodbye to Kara Danvers and the rest of the Super Friends for good. As we head into the final season, showrunners Robert Rovner and Jessica Queller say they’re working on bringing a few familiar characters back to National City before the CW series wraps.

“We absolutely have plans for familiar faces to hopefully appear in the season finale,” Queller tells TVLine. “We’re hoping that works out and we’ll have a very emotional full circle with some of our own favorites.”

One of the familiar faces that we hope will appear is Mon-El (Chris Wood), who we last saw in an alternate timeline fighting Reign in the show’s 100th episode. Queller says it’s “unclear” if the former prince of Daxam will return for the final season. 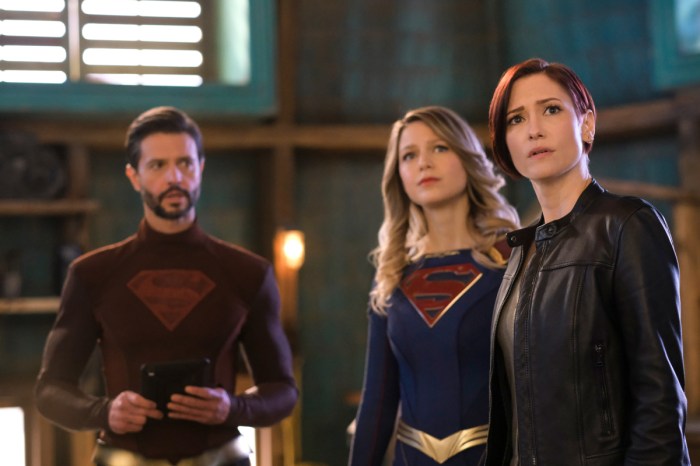 The final season premiere, titled “Rebirth” and set to air Tuesday, March 30 at 9/8c, will pick up where we left off in the Season 5 finale with Brainiac (Jesse Rath) near death after attempting to stop Lex (Jon Cryer). As the Super Friends fight the last of Leviathan, they’ll then turn their attention to Lex, who has used the Obsidian platform to brainwash half the world into becoming devout followers.

The whole crew — including Alex (Chyler Leigh), J’onn (David Harewood), Dreamer (Nicole Maines), Kelly (Azie Tesfai), Lena (Katie McGrath) and Brainiac — will step in to help, but Supergirl (Melissa Benoist)realizes that the only way to truly stop Lex is to sacrifice herself.

“The stakes are very high in the season opener, and they get higher by the end of it,” Rovner teases.

Are you hoping to see Mon-El back in National City one last time? Drop a comment below and let us know.