Of course the pals attend high school together, but they also tell each other everything, work at the same pizza shop, obsess over girls and often get in trouble together. In this week’s installment, Dwayne and Gabe planned a double date with their new boos — that is, until Dwayne’s mom Ata grounded him for disrespecting her and shoplifting those impressive purple Girbaud jeans and more.

“Dwayne thinks he’s got it made, Karen and the nice clothes,” Constant tells TVLine with a chuckle. “I personally hadn’t heard of Girbaud jeans until now, but I’m with Dwayne, they’re pretty cool. But he’s not realizing the stress he’s putting on his mom. Dwayne, like a lot of 15-year-olds, is not a bad kid. He is just making bad decisions.” 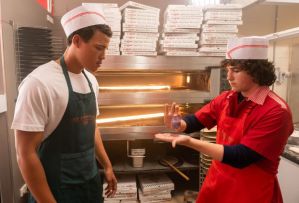 To establish their chemistry, Constant got Cross’ number, and the two talked and texted right up until they met in person to shoot the freshman comedy in Australia.

“When we got to Australia, I already kind of knew him,” Cross, a Los Angeles native, says of Constant. “And it was already easy to interact in person because he’s so cool. We ate dinners together and hung out a bunch. That really built that chemistry you see on screen.”

In Queensland, the pair also rehearsed together and hung out away from the set to further their bond.

“Taj is my homie,” says Constant, who hails from Tuscaloosa, Alabama. “As soon as we met, we instantly clicked. We have a lot in common. Taj is a kind, supportive and genuine friend. He’s that kind of person you can meet, and they instantly feel like family.” 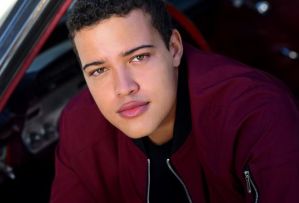 Constant remembers that “while shooting, I got a rental car and we explored all that we could in Queensland. From roller coasters to hugging kangaroos and just blasting music in the car, we honestly made some of the best memories that I know I will hang on to for life.”

Although Constant has Johnson to turn to for character inspiration, Cross, who is still in high school, has to rely on his own personality to bring Gabe to life because his character is a composite of The Rock’s teenage buddies.

“We have similar energy,” Cross says of Gabe. “I really love the role because I can run with it and make a bunch of decisions. It’s fun to make those choices and connections. Everything is on the page, but I do manage to squeeze in a bunch of ‘man’ and ‘bro’ and ‘dude’ when I speak.”

Constant, who played baseball in high school, says it means a lot to play someone he admires, but also tap into his human flaws.

“Honestly, my favorite part of playing Dwayne is the lessons I am learning about my younger self,” Constant says. “It was truly wild for me to learn that we had a bit in common. Not in an exact way, but we shared a similar mindset as a teenager. We both carried around some weight on our shoulders, but our moms always made things a little easier. To see some of myself in a guy that I respect so much and seeing where he and his family are now reassures me that even when I make mistakes, I can keep pushing and eventually come out on top.” 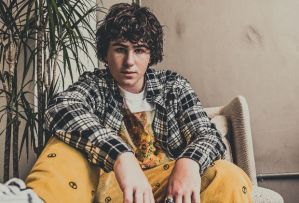 If NBC renews Young Rock for a Season 2, Constant and Cross have some dream character evolutions they’d love to see.

“I’d love to see Gabe’s parents,” Cross says. “I’m pretty sure Gabe’s dad is the owner of the pizza shop. So I would love to see that dynamic because I think that’s going to be super funny. That would also give me more relationships. I would also love to see what Gabe is doing when Dwayne becomes a football star in college.”

Constant says he wants to see his character toss around the pigskin in high school.

“If we get picked up for Season 2, I would love to play some football,” he says. “I’m an Alabama boy who grew up with football in his blood, but never played in school. I would love to suit up, Friday Night Lights-style. I also wouldn’t mind doing a little country singing here and there, as well.”