Like viewers, Good Trouble star Sherry Cola also sometimes feels like the show’s writers have a crystal ball to help them craft topical and prescient storylines. The Freeform drama has been highlighting the Black Lives Matter movement since its premiere in early 2019, in addition to telling stories about women in tech, transgender veterans and restorative justice, to name just a few contemporary issues.

“I always say Good Trouble has been that show ahead of its time, reflecting real-life issues before the world catches up,” Cola tells TVLine. “Recently, we had a table read, and afterwards, Maia [Mitchell] texts in our Coterie group chat, [and] she says, ‘This episode was therapy.'”

This Wednesday’s installment (airing at 10/9c) is another example of the series being on the pulse of what’s happening in our society. Now that Cola’s Alice has found success in the comedy diversity showcase with her impression of her mother, she’s forced to confront the Asian stereotypes in her own sketches. “First of all, I’m just extremely grateful that [this episode] was written by Thomas Wong and directed by Yoko Okumura. These are two Asian people in my community who are just so talented,” Cola enthuses.

“We saw a couple episodes ago that [Alice] entered this comedy diversity showcase, but at what cost? I think she’s being put in a box, like without even realizing it,” Cola previews, adding that Alice “can be kind of naïve” and thought she was simply doing an impersonation of her mother the way other non-Asian comics mimic their own moms. 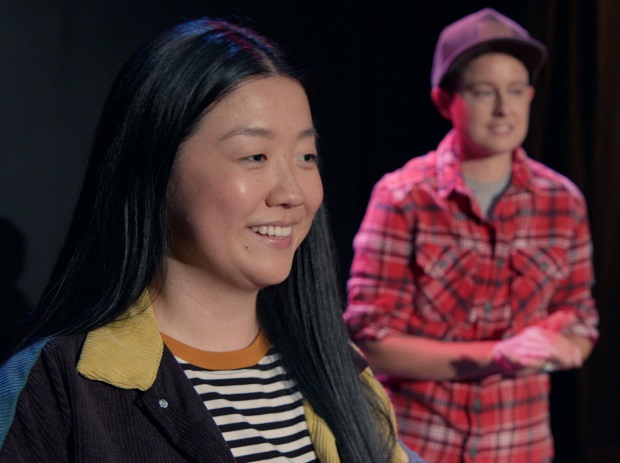 “For Alice, it didn’t seem harmful until Lindsay called her out, in a sense, for falling back on her ethnicity, and that makes Alice think twice,” Cola continues. “So we definitely explore that in this week’s episode. It really goes hand-in-hand with representation in this country. Representation on the screen reflects representation in this country, and sometimes on screen, Asian people get put in a box. We are forced to do the accent, we are forced to be the punchline, and [as a] result, that is how society and America sees us.”

Given the topic explored, combined with current real-world events, “this episode is really going to hit home,” Cola says. “Because of the devastating shooting in Atlanta, the Asian community is just heartbroken right now and really processing and trying to express and just fighting back. The community is stronger than ever right now. We’re so unapologetic and realizing, one, we belong in this country, and two, we belong in this industry… There’s so much more work to be done, and I think we know that. We’ve been knowing that, and I’m hoping everyone else is catching up to it.” 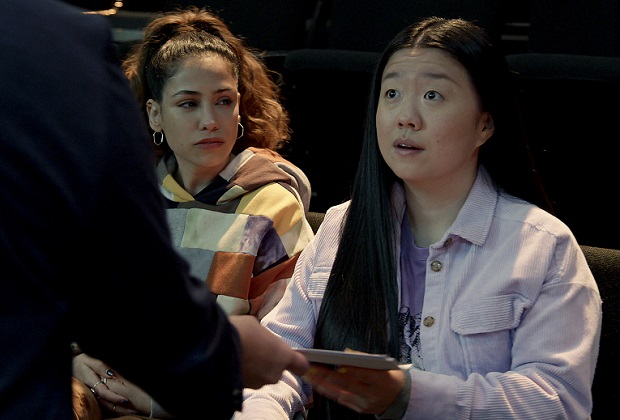 And once again, Good Trouble is “having conversations that are overdue,” Cola notes. This week’s hour, in particular, “could not be more timely in the theme of Asian people breaking that stereotype that America and society has forced us [into]. The theme of Season 3, in general, for Alice is finding your voice, and being put in that predicament [in the showcase], Alice is going to have to wake up and stand up for herself.”

For Cola, who is also a stand-up comic, her character’s situation is one that hits close to home, especially when it comes to representation. “Just like how Alice is the odd woman out — she’s checking the box, if you will, for this comedy diversity showcase — that kind of is how it is in real life as well. I am the only one of my people in every category — woman, Asian, queer, immigrant, whatever it may be — on a stand-up lineup,” Cola shares. “I think there’s a lot more work to be done in the comedy space. What Alice is going through is definitely a reflection of what Sherry goes through.”