Now there’s a tactic we haven’t seen a coach use before. As The Voice’s Season 20 Blind Auditions neared their conclusion Monday evening, Blake Shelton jokingly implied to a contestant who’d auditioned with a Maroon 5 song that he shouldn’t join Team Kelly Clarkson because… well, look at whose seat she’s in. “I’m not saying that [she] got Adam [Levine] fired,” he grinned, but “he’s gone, and she’s setting there.” Did the cheeky strategy work? Read on and find out, as we review performances by the last four singers to advance to the Battles.

Denisha Dalton (Team Legend), “Pillowtalk” — Grade: B- | This self-proclaimed hustler told us in her pre-interview that she formed not one but two girl groups as a kid, then lost her confidence after moving to Nashville. So she was hoping a chair turn would “reignite Little Denisha.” But even before chairs started swiveling, she sounded like she was on fire. On the intimate parts of her Zayn cover, the way she played with notes and put a hint of a tear in her voice really made you lean in. Unfortunately, those bits were so good that she sounded less impressive when belting. The bigger the song got, the messier her performance did. 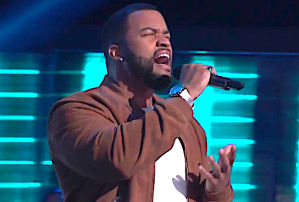 Awari (Team Nick), “Weak” — Grade: B | A divorced dad of two, this former Air Force boom operator hoped with his tryout to show his kids that “Daddy’s determined.” And that, he had to have. On his SWV cover, he poured out notes that were as sweet as syrup being drizzled over a stack of pancakes and demonstrated eyebrow-raising range. I suspected we were hearing a little lack of training now and then, but Kelly suggested that on his runs, “he wasn’t trying too hard, it was just very emotional.” So maybe that was it; he was going for the feeling rather than precision.

Keegan Ferrell (Team Blake), “She Will Be Loved” — Grade: B+ | Presented initially as a truly blind audition, this 21-year-old, who’d been adopted after being left in a marketplace alley in China, filled the room with smoke — just from his come-hither voice. Keegan seemed to struggle a little to reach the high notes that Adam Levine hits on the Maroon 5 classic, but he’s definitely got something. Hilariously, in pitching Keegan, Blake suggested that Kelly had gotten Adam fired. In fact, since she also had a talk show on the network, NBC really stood for “Nothing But Clarkson,” Blake cracked. Funnier still, his tactic worked! 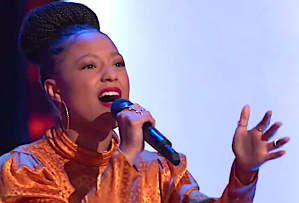 Ainae (Team Kelly), “Best Part” — Grade: A- | In her getting-to-know-you segment, this 21-year-old shared that she was born into a musical family — Mom’s in marketing, Dad’s an audio engineer, Grandma ran Twins Jazz. And she sure did ’em proud. As she was singing, I half-expected to see light, fluffy clouds coming out of her mouth. Her vocal was as airy as a sunbeam. Once or twice, she might have veered toward pitchiness, but overall, impressive. John even went so far as to liken her voice to Minnie Riperton’s.

So, who stood out for you Monday night? Vote in the poll below, then hit the comments. Early faves in the competition?