Lauren Graham‘s year-plus stint on Zoey’s Extraordinary Playlist came in very handy while shooting the pilot for The Mighty Ducks: Game Changers. In the closing moments of the Disney+ sequel series (premiering Friday), Graham’s unlikely hockey coach performs an impromptu ice dance that was as (intentionally) awkward as it was charming. It was also almost entirely self-choreographed.

“I had to learn a lot of choreography in a very short time on Zoey’s Playlist, so any kind of physical lack of confidence I had… that switch was already flipped,” Graham explains to TVLine. “So I just made it up. I tried to approach the number with a sense of fun and freedom… and a lot of upper body.” While noting with a laugh that “the feet aren’t entirely mine” — a stunt double supplied the fancy footwork — the action above the waist was all her.

Read on as Graham delves further into her Mighty Ducks experience, while also teasing a handful of projects in the pipeline (including, potentially, one with Gilmore Girls creator Amy Sherman-Palladino).

TVLINE | How much ice skating experience did you have coming into this?
My training was eighth grade birthday parties in Arlington, Virginia. [Laughs] I did a fair amount of skating as a 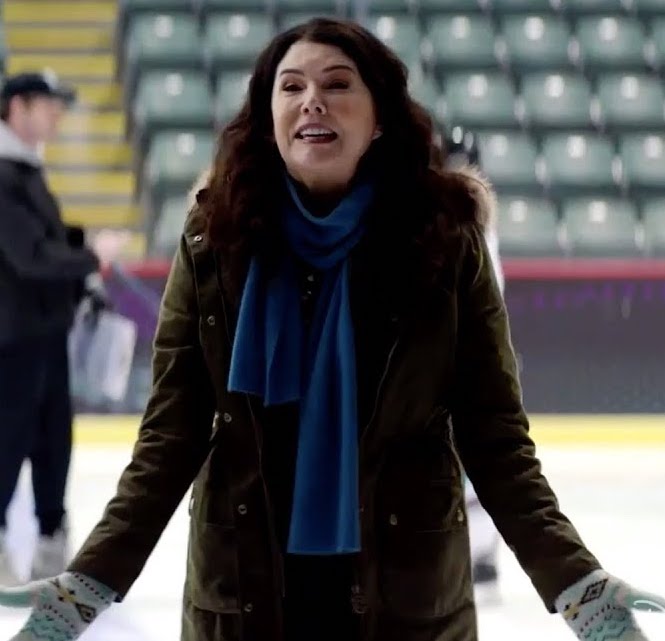 kid, just for fun. That’s part of what was appealing to me about this show— can I learn this new skill? There was a built in break between the first and second episodes, but that’s when [COVID] happened. And that break was supposed to be my intense skating boot camp, which I was really looking forward to. And then everything closed. So I wasn’t as good as I wanted to be. If we come back [for Season 2] I plan to improve.

TVLINE | What about hockey — were you a fan?
I was interested more in The Mighty Ducks [franchise than hockey itself]. And I like sports in general. I live with [boyfriend and former Parenthood co-star Peter Krause], who is a Minnesotan [so I have a real link and love for Minnesota [sports]. I’m in a fantasy football league, Michael. This is what’s happened to me.

TVLINE | What?
I know. This is all because of Peter. But the problem I always have with sports is someone loses, and that’s really upsetting to me. Even if it’s [the “other” team that loses], I just find it really harrowing.

TVLINE | You clearly ignored the old Hollywood mantra about never working with kids and animals. Any trepidation about joining a show where the majority of the cast members are…
Thirteen year-olds? [Laughs] No. I’ve worked with a lot of kids in my time. I have developed lifelong friendships with many of them. It was a little bit jarring to walk into the [first] table read. I was like, “Wow, everyone’s 13-years-old.” One of the things I have evolved into [when choosing roles] is thinking more about the big picture. It’s not just the part — it’s what is the endeavor. I was drawn to Disney+ as an entity. I was drawn to [only doing] 10 episodes [per season]. I was drawn to being a producer — and being tapped to direct if there’s a second season. It ticked a lot of boxes. And being a person who is sensitive to reboots, I’m hoping the audience will feel seen and respected.

TVLINE | What was your dynamic with your younger co-stars like?
I hit the jackpot because the kid I worked with most is [my onscreen son] Brady [Noon], who’s really funny and 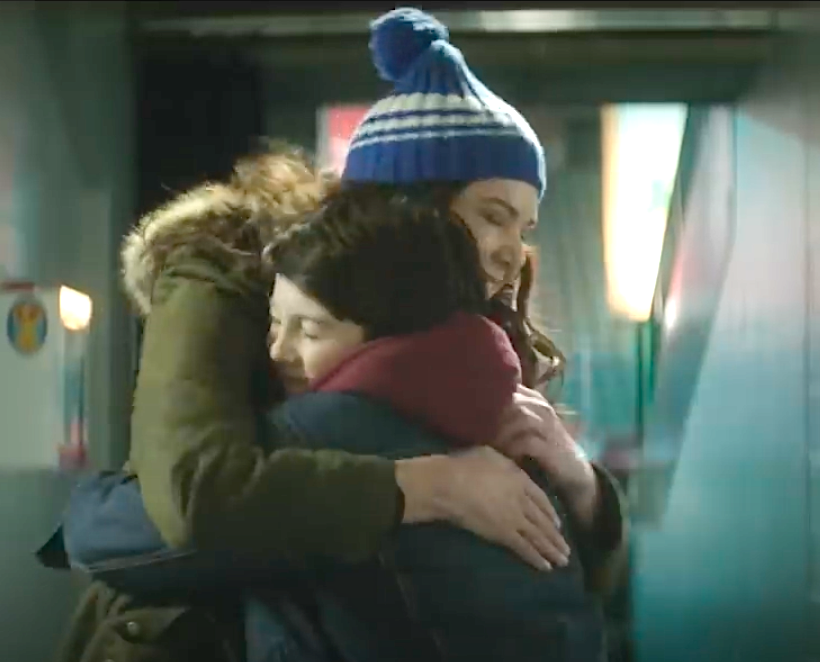 really sweet and smart. One day while we were shooting the first episode he was like, “Hey. I looked you up. People really like you. And they like the stuff you’ve done!” And I was like, “Did you think I was just some lady off the street?” And he said, “Kind of.” [Laughs] And then he gave me the highest compliment I have ever received in my entire career. He said, “I have worked with Sarah Silverman and you are the two funniest people I know.” I was like, “You’re wrong… but thank you.”

TVLINE | Mighty Ducks, like Zoey’s Playlist, shoots in Vancouver. But because of the pandemic, I’m assuming you couldn’t fly home to L.A. on weekends. Was this the longest period of time you had to be away from home for work?
[Sighs] Yes.

TVLINE | How was it?
It was terrible. [Laughs] I was [in Vancouver] from August 1 to December 15. Thank God [Zoey’s Playlist star] Jane [Levy] was down the street. And my friend Sam [Pancake] was there off and on. There’s a lot of production [in Vancouver] so I’d run into people I sort of know. But if I was ever feeling sorry for myself, I [reminded myself how] lucky I was that they continued [shooting Mighty Ducks during the pandemic] — and that I have any job at all.

TVLINE | Any collaborations with Amy coming up? She’s said she wants to find a role for you on The Marvelous Mrs. Maisel…
I don’t know about Maisel. I sort of wonder if it would take you out of [that world] to have me there. I leave that up to her. But we talk all the time. I was texting her yesterday. I think we’ll find something to work together on. I’m 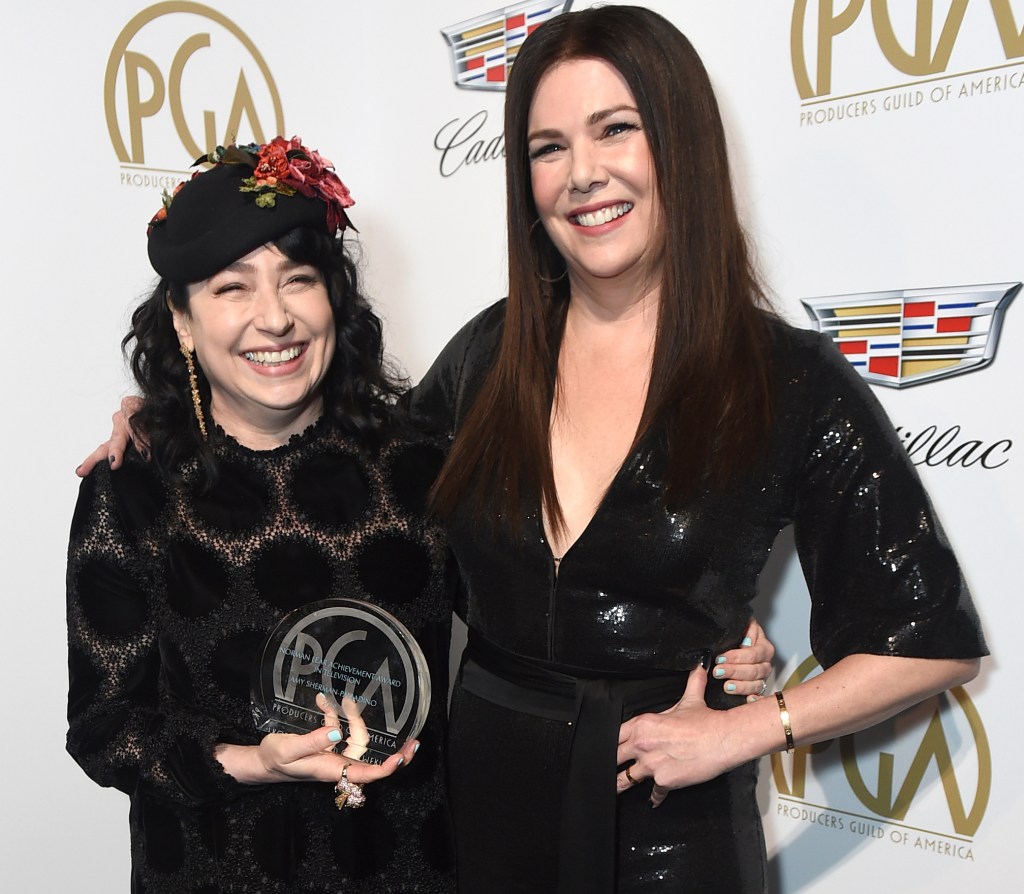 writing quite a bit. I feel like the more experience I have as a writer that that might be something we do [together], although it chills me to think about writing something with or for Amy. But she’s been an accidental — and now intentional — mentor in my writing, and I just think we have similar taste and vibe.

TVLINE | Any more books planned?
I’m working on another book of essays [tentatively] called Have I Told You This Already?, which is a companion piece to my first book of essays [Talking as Fast as I Can], but the subtitle is, “Stories I Don’t Want to Forget to Remember.” It’s about [pre- and] post-Gilmore life. You’ll be excited to hear I’m working on an essay right now called, “Boobs of the 90s,” which is about the year I moved to L.A. from New York. Having [touched on] the bigger events and Gilmore-related stuff in the first book, I’m now thinking in slightly deeper way about how I got started and what it’s like to work at this age and at this time.

TVLINE | Were you able to squeeze in another Season 2 Zoey’s cameo while you were in Vancouver?
No. Someone on my team [at Mighty Ducks] tested positive [for COVID in the fall] so I had to quarantine again in the middle of production. And it just [wiped out] all of my days off, [including all of] my skate-training days; any flexibility there was [in my schedule] was gone. I hope to come back, because I really enjoyed that show and I love Jane. I think there’s hope.