With the Mirrorverse now, and at long last, in his and Iris’ rear view mirror, The Flash is about to get a blast from the past — and then speed toward a fun storyline from the comic books.

First up, in what is technically the CW series’ first episode of Season 7, titled “Central City Strong” and airing Tuesday at 8/7c, The Flash will have to deal with the sudden return of time-traveling techno-wizard Abra Kadabra (played by guest star David Dastmalchian), to settle a score in Central City.

“That was one of my favorite episodes to film so far this season,” Grant Gustin recently shared with TVLine. “I love working with David Dastmalchian, who’s not only an incredible actor, but he’s just a really good person.”

Coincidentally, Dastmalchian also recently reprised his villainous role on CBS’ MacGyver, where he pops up now and again as arch nemesis Murdoc.

“He’s the kind of actor you want to work with,” says Gustin. “He’s got good ideas, he’s super giving, he’s genuine… and he kills it. We shot a couple of scenes where I was just in awe of what he was seemingly so easily able to pull off. He’s just a really, really skillful actor.”

Also in this week’s episode, Iris is forced to look at a dark moment in her past, Allegra deals with a tricky situation, and Caitlin suspects something is off with alter ego Frost. 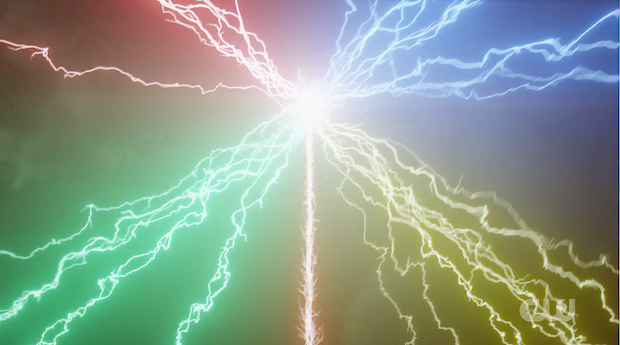 A bit further down the line — and presumably teased in the “18 Hours Earlier” bonus scene of the March 16 episode, where we learned that the recharging of the Speed Force unleashed a veritable rainbow of lightning bolts into the sky above Central City — “we’re going to see something that’s from an arc in the comic books,” Gustin shared. “It’s a cool storyline that we explore for a stretch of episodes [and] I was super-sad when we wrapped it up, actually, because I had such a good time working with [the actors involved]. I think it’s going to be a fun storyline for the fans.”