In Sunday’s episode, viewers were treated to some fresh flashbacks showing us the very early beginnings of Beth and Dean’s relationship. While a charming, younger Dean became a much-needed distraction and support system for Beth throughout her mother’s illness, the present jailbird Dean made the ultimate sacrifice for his wife as he pleaded guilty to the Feds’ charges. After Rio rejected Beth’s request for a bail loan and the ladies’ fall guy plan failed, Dean seemed destined to continue his life behind bars as a wrongfully accused convict.

But what lies ahead for the Bolands’ marriage and their hot tub store, and will Annie ever be able to turn her life around? TVLine talked to co-showrunners/executive producers Jenna Bans and Bill Krebs to get their take on what went down and what lies ahead.

TVLINE | How long will Matthew Lillard be acting behind bars, because it doesn’t seem like Dean’s getting sprung from jail any time soon…
JENNA BANS | What’s fun about it is it really forces Beth to re-examine the choices she’s made, and the choices she’s currently making. It sets their marriage on a collision course that carries us to the end of Season 4, where I think the audience has been asking themselves: Why are these people still together? Are they right for each other? What made them get together? Whatever that was, does it still exist today? We’ll answer all of those questions and by the end of Season 4, we’ll have a definitive answer on the future of Beth and Dean.
BILL KREBS | All the penance he’s had to do for his infidelity in the past… at what point is enough enough? Is she now torturing him beyond anything he deserves? We like keeping their relationship very messy because that’s reality. That’s what happens in marriage. It isn’t clean cut. Marriage is hard, relationships are hard and there is no one solution to get through a problem.

TVLINE | I loved the flashbacks in Episode 3. They definitely helped paint Dean as a sympathetic character, despite the couple’s rocky past.
KREBS | He seemed like such a doofus in the beginning of the series. Why would she be attracted to him? We really wanted to answer that for the audience. Deep down underneath all of his failures, he’s still that guy who’s a good person who went astray, not unlike Beth, who is a great mom. She’s made some bad decisions lately, as well. 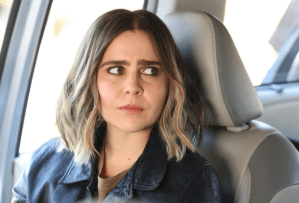 TVLINE | The ladies’ “fall guy” plan unfortunately fell through. What else does Beth have up her sleeve?
BANS | Something presents itself in Episode 4 that puts her in a place where she can’t say no, and that also helps Dean. It launches the season into a different sphere in terms of what Beth has to do to keep Dean out of trouble.
KREBS | If Season 3 was about Beth’s journey to independence in crime, where she wanted to own something for herself and not be under Rio’s thumb, this season is about realizing you can’t change a person and that the only way out is to just escape all of it, on some level, and to leave it behind.

TVLINE | With the feds now swarming the hot tub store, does that mean Boland Bubbles is through?
BANS | Yes, it does actually. They’re going to have some troubles ahead in terms of how they wash the money for Rio, which will then launch us into a very fun arc where they’re trying to find a different way to wash it. Where they end up is a career/area of society that we never thought we would see or witness. It’s so fun and empowering, but in a twisted way. It’s an unlikely feminist statement, and where they finally land is going to be with us for a while. The car dealership failed, the hot tub place failed, and then they finally land on what works. I think the audience will really get a laugh out of what that is.
KREBS | Our “Good Girls” are very resourceful!

TVLINE | Lastly, will Annie ever be able to get it together? What’s on the horizon for her?
BANS | Season 4, I would say, is the season where Annie gets it together.
KREBS | Whereas the other women might find themselves devolving, in a way, through their relationships and through the criminal enterprise, Annie uses Season 4 as a way to grow up. She always makes the bad decision, so what’s it like to make the right one? What does life look like when you actually think responsibly and self-actualize?
BANS | And it affects so many aspects of her life, in terms of her romantic relationships and even her relationship with Beth. It affects it in a positive, surprising and sacrificial way. Annie is sort of redeemed by the end of Season 4, and she lands in a place no one will ever see coming.

TVLINE | It’s always fun to see Mae Whitman squirm a bit!
BANS | She’s so funny and she can do anything. She makes even the darkest of situations have a lightness to them, so we keep putting her in dark situations just to see that!