Aretha Franklin sang about “Respect” but what she really craved was control.

Franklin, who was undeniably brilliant, fiercely wanted to protect the love and loss within her private life as well as have a say in the strategic trajectory of her career. These are two of the major themes thoughtfully explored in Nat Geo’s Genius: Aretha, which premiered with two episodes Sunday March 21. Emmy, Grammy and Tony winner Cynthia Erivo sings beautifully and delivers a masterful performance as the icon at various stages of her life in the titular role. And Courtney B. Vance shines as he steals countless scenes as her larger than life father, the Rev. C.L. Franklin. 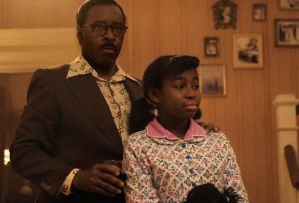 The series also shows how the Queen of Soul’s need for privacy clashed with the fact that those aspects of her life inspired hit songs such as “I Never Loved a Man (The Way I Love You).” Her chart-topper “Do Right Woman, Do Right Man,” meanwhile, allowed her to infuse the gospel sound she perfected while growing up in Detroit’s New Bethel Baptist Church with her father at the helm. The Reverend guided her as a star in the making, and she sought his approval well into adulthood despite being a mother, a wife and a boss.

Her first husband Ted White (played skillfully against type by Timeless‘ Malcolm Barrett), could never measure up, not that his abusive manner nor line of work as a pimp helped. The way in which showrunner, EP and writer Suzan-Lori Parks addresses said abuse is effective without being gratuitous. The fact that Franklin is shown singing and being “queenly” after having received a black eye which she hid with makeup is a testament to her strength, not White’s, as was her choice to eventually leave him. 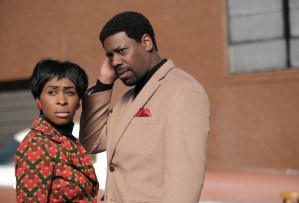 Genius: Aretha also marks the first time the series, now in its third season, has featured an American, a Black person and a woman. Because Franklin was all of those things and more — including a phenomenal composer — we see her suffer and overcome racism, sexism and domestic abuse while using her genius. (Like John Lennon, Paul McCartney and dozens of other heralded male songwriters/musicians, Franklin was a skilled pianist with a trained ear who could play the piano without the ability to formally read or write music.)

As a child musical prodigy (played by impressive newcomer Shaian Jordan), Little Re and her father experienced jarring bigotry while driving through the south. In one unforgettable scene, the Reverend gave up his car to save his life and that of his daughter’s from two racist white men. He then went and bought a new car in cash. Later, the racial prejudice is more subtle such as when Little Re simply drank from a water fountain marked “colored.”

Franklin became a mother at 12 but Parks didn’t attempt to solve the mystery of whom the father of Franklin’s first son was. She does deliberately unpack what it’s like to be pregnant at such as young age. C.L., who felt guilty about not better protecting her while they traveled and performed on the road, also encouraged his favorite daughter to keep going to school and pursue her musical dreams. And her grandmother Rachel Franklin (the amazing Pauletta Washington) stepped up to help raise Clarence and eventually his younger brother Edward before the singer got married, which was considered quite scandalous in the 1950s and 1960s.

But there is no harsh judgment of Franklin’s family planning in Genius: Aretha. Instead, the series weaves in the facts and keeps it moving in order to celebrate this great woman’s gift and how she was able to deliver that to the world. Her road to greatness is also examined because Franklin made several tepidly received jazz albums for Columbia Records before connecting with Jerry Wexler (Arrested Development’s David Cross) at Atlantic Records and soaring stratospherically. In fact, Episode 2 closed brilliantly as we saw Franklin draw Wexler into her orbit after performing on The Steve Allen Show. While her on-camera performance underwhelmed him, Franklin was shown wowing Wexler with a rendition of the gospel classic “How I Got Over” after the show and setting her destiny in motion.