While we still aren’t sure whether Leanne is a harbinger of doom, a saint or something in between, the big questions going into Servant‘s Season 2 finale all revolve around Jericho.

Is the baby dead? The latest member of the Church of the Lesser Saints? Stuck in a hell dimension? Living on an alien planet? It’s all one big shrug emoji because on this show, anything is possible.

So did Jericho return? Let’s recap and find out.

“I understand you are looking for Jericho,” the mysterious woman at the Turners’ doorstep declares at the top of the finale. Her name is Aunt Josephine and she has brought the Betamax player Uncle George had previously requested. She asks to come inside, telling Sean, “You can trust me,” which is exactly what a looney would say. Her face is shrouded with a black veil, which only adds to her eeriness. Josephine asks to see Leanne, who is “in desperate need of my help.” The woman says there is an order “in which it must be done… we have our customs.” But Dorothy, for one, is tired of playing games.

Leanne is trepidatious of her “aunt,” and asks Sean not to leave her alone with the old woman. Aunt Josie tells Leanne she doesn’t belong with the Turners, and that they don’t love her. Josephine informs Dorothy that she and Leanne are leaving, but she wants to keep her promise. She hands Dorothy a set of baby clothes and declares “It’s the truth, dear.” Okaaay. (Did this series turn into a James Wan film? This has some serious Conjuring 2-creepy-nun vibes.)

Dorothy locks herself in Jericho’s nursery. She frantically changes the doll’s clothes, while Auntie heads upstairs to play the Betamax tape, which she calls Leanne’s “final warning.” On the tape, a man named Uncle Frederick explains how to turn a lost member back to the light. The ritual is a four-step process, which starts with an invocation. On the tape, “Tutti Fruitti” starts playing (it’s one WTF?! moment after the next here, folks!), while members of the church start beating themselves up. Next is the consecration, where members are blinded with oil or a knife. The flesh of each limb must be opened with a heated blade, which reunites the body’s soul with God. Then, it’s time for the emancipation, aka burning the body in a raging fire. “When one of us goes bad, there’s no turning back,” Frederick explains. Like a psychopath.

Josephine tells Leanne they are here for one purpose: “To serve Him.” Which “him” she’s referring to, exactly, remains a mystery. Auntie blinds Leanne with a scalding hot liquid. The girl then stumbles her way to the kitchen to grab a butcher knife before falling down the basement steps. 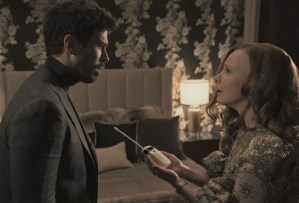 Meanwhile, Dorothy refuses to unlock Jericho’s door. She thinks her baby has been murdered, and while she talks to Sean through the door, she fashions a noose attached to the crib. “I need to be with him,” she says.

In the basement, Josephine starts a fire, and starts slicing Leanne’s limbs while chanting, “Burn like the rest!” Dorothy comes to the rescue by knocking Josie out with a shovel. Leanne admits through tears: “She wanted you to think he was gone… he’s not gone. I’m gonna bring him back to you.” Dorothy exits and Leanne says, “See? She protected me. Like I’m her daughter.” (I still can’t decide if we should trust Leanne or not. This line was particularly unsettling, no?)

Leanne heats up the dagger in the flames, and when Josephine awakens, a tussle ensues. “Vanity is a sin,” Leanne says, before stabbing the woman directly in the eye. When Dorothy returns to the basement with Sean in tow, the two women are nowhere to be found. They hear Leanne on the baby monitor, and when they approach her in Jericho’s room, the nanny is holding the living, breathing, non-doll version of Jericho. “We’re going to be a family now,” she says.

Leanne gets the season’s last words, as she’s sitting alone on her bed: “I don’t know why I keep doing bad things. I scare myself sometimes. I can feel the dark thing in me getting bigger. But I’m tired of everyone telling me what’s wrong with me. Maybe there’s nothing wrong. Maybe this is who I am. I know how this works. I know they’re coming for me. But don’t worry. I’ll be ready. I know killing you started a war.”

Are you ready for the battle ahead? Grade the finale and season below, then hit the Comments with your thoughts and burning questions!