Not only could she take command of her mostly male back-up band, but her brilliant ear allowed her to compose and craft hit after hit while secretly dealing with painful occurrences in her life. In fact, she often turned pain into creative inspiration.

And when fans tune in for Nat Geo’s Genius: Aretha, which premieres Sunday March 21 at 9/8c and stars Cynthia Erivo as the Queen of Soul, they will get a sense of the racism, sexism, loss and abuse the Detroit-bred icon and mother suffered (and overcame) throughout much of her storied life.

Anthony Hemingway, who directed and executive-produced Season 3 of Genius alongside showrunner, writer and EP Suzan-Lori Parks, says that having an Emmy, Grammy and Tony award-winning artist like Erivo made all the difference.

“Cynthia is a treasure,” says Hemingway, an Emmy winner in his own right. “Her performances were transformative. I especially loved doing performance pieces and watching Cynthia display the complexities and nuances of Aretha. What Cynthia and I tried to create was authenticity. We wanted to show what the cost of being a genius is.”

Read on as Hemingway previews the first two installments of the eight-part, four night television event that is Genius: Aretha — and check out the sneak peek below. 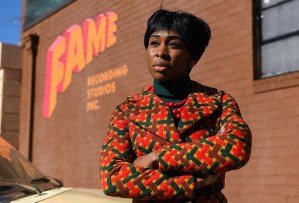 TVLINE | Are you an Aretha Franklin fan, and does it help to be when you direct and executive-produce a dramatization of her life?
I was and still am a huge fan of Aretha Franklin. Her music, including gospel, was a big part of the soundtrack of my childhood. Aretha was also extremely active in her activism in support of her culture and community. That was very inspiring and encouraging. When you’re tapping into someone’s humanity, which we did with in the series, I personally believe it’s necessary and extremely helpful to go really deep inside the subject of whatever story is being told — especially stories about real people. It also can make it more enjoyable.

TVLINE | I ask because there are so many loving and compassionate touches in Genius: Aretha. Can you talk about how you all decided to unpack her very complicated story and genius?
Thank you for saying that, because it’s never easy tackling a real person’s story, especially someone as decorated, celebrated and loved as The Queen of Soul. It requires a posture of sensitivity, compassion, care, humility, love, and a whole lot of research. Aretha was a musical prodigy, but she carried heavy personal burdens that she kept secret. We wanted to show how Aretha survived her burdens, thrived despite them, and alchemized them into the hits that brought people together. Her music was deepened by her connection to the struggles and triumphs of the Black experience from a young age. This is truly a character study about the real human being behind the razzle-dazzle of celebrity, and I wanted a human, personal and intimate visual experience. Aretha’s story is an example of how we can use our voice, our platform and resources to support and effect change. 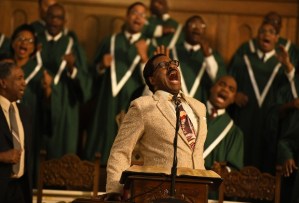 TVLINE | The casting is impeccable. Courtney B. Vance is the Rev. CL Franklin I didn’t know we needed, but when I saw him, I was transported. And he’s from Detroit. Was he the first choice? Was everything we saw him do on the page, or were there moments of improvisation?
Courtney was the only choice for me! [Chuckles] There was no doubt in my mind! Rev. CL Franklin was a celebrity in his own right, he had a magnetic personality, he was a singing preacher and he was also human. And he was a major influence on Aretha and the choices she made in her career. Thinking about all the complexities and range that Rev. Franklin needed to navigate, I couldn’t see past Courtney. He is a treasure chest filled with an abundance of talent, skill, charisma, swagger, love for life, love for the culture, love for God … I could go on and on. Courtney constantly elevated the material and everyone around him. Oh, and he’s from Detroit, which was something I knew would allow him to sprinkle even more magic and nuance in his performances. 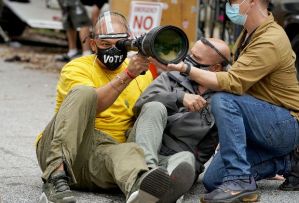 TVLINE | Why is it important to tell this story now? And how did you overcome the obstacles that COVID threw your way?
You learn from experience, whether it’s your own or someone else’s. There were many inflection points in the ’60s and ’70s that needed strong, loud leaders who helped contribute to the river that brought change to injustice. We’re living in similar times now and Aretha’s gift, her magic, her genius, is more necessary today than ever before. COVID tried us, but we had an exceptional, dedicated cast and crew who rose to every occasion and hurdled every obstacle like Olympians.

TVLINE | There is a moment — without dropping any spoilers — when a flashback goes from black-and-white to color like something right out of The Wizard of Oz. It’s breathtaking. Can you talk about the choice to do that?
This is one of my personal favorite moments in the series. And you nailed the reference — The Wiz! Aretha reminded me of Dorothy and her journey, from lacking self confidence to finding her superpower. The scene you’re describing was a defining moment in Aretha’s life, at the age of 13, when she sang her first solo in church. Little Re starts the scene with a lack of confidence — her father encourages her, “Sing like you do at home” — then Grandma Rachel champions her with more encouragement, as Black grandmothers do. “Let Him use you,” she whispers a prayer. God unlocked the spirit of fear and Little Re leans into her song, getting everyone in the church up on their feet praising her.

I wanted to punctuate this moment with something visually bold and dynamic. My DP Kevin McKnight and I, our approach is all about the creative intentions that illustrate the psychology of the narrative and the players. We have a lot of discussions about intention, which then inspires thematic concepts. The inspiration for starting the scene in black-and-white and transitioning into color was discovered out of us talking about Little Re’s evolution from lacking confidence to standing on her faith and finding her strength. This moment later birthed the blueprint of mixing color palettes to help navigate through multiple periods, mixing camera styles and lens choices that would play the dichotomy of extremes in the series. 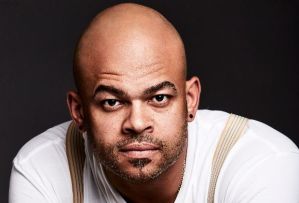 TVLINE | There appears to be a wonderful renaissance of Black artistry occurring on the small screen, and you and Suzan-Lori Parks are right in the thick of it with Genius: Aretha. Do you think this is a trend, or something more permanent? And would you say that it is more important than ever, given the racial reckoning, to tell these stories as Black artists?
It is more important than ever. Representation matters. Creating pipelines matter. I believe that it started out feeling like it was going to just be a trend or a moment; now, I feel with the contributions of so many great artists and storytellers demanding the stage and the microphone, there has been a necessary awakening. We’ve dug a massive hole and filled it with a solid foundation. But we’re not done. There’s so much more to be done.

Check out an exclusive sneak peek at Episode 2 of Genius: Aretha: