The following contains spoilers from March 19 premiere of Disney+’s The Falcon and the Winter Soldier. Read at your own risk.

The Falcon and the Winter Soldier has crowned a new Captain America, and it’s not Sam Wilson or Bucky Barnes!

The Disney+ series’ premiere saw Sam donate Cap’s shield — which Steve Rogers handed to him in Avengers: Endgame — to the Smithsonian, only for the U.S. government to turn around place it in the hands of a new Captain America: John Walker (played by Lodge 49‘s Wyatt Russell). In the comics, Walker’s Super-Patriot is a villainous counter to Steve Rogers’ version of the Cap, representing dark-sided, extreme patriotism. His ascension is a huge betrayal to Sam, who expected the shield to remain on display in honor of Steve’s legacy (“This belongs to you.”)

Malcolm Spellman, who wrote and executive-produced all six episodes of the Marvel series, says that while Sam is hurt by the reveal, it’s not surprising that the government would do such a thing.

“The reason it happened is the doubt that Sam would naturally have in this country, if not the world,” tells TVLine. “Being a Black man, he knows how he’s viewed and he knows the electricity that would come from him carrying those stars and stripes. You meet his family, and [they] already have opinions on it — you’re hearing some of it in jokes, but it’s very pointed. A Black man being betrayed by his country I don’t think is a surprising thing to Sam or any of our viewers, but it is powerful because it gets to the heart of Sam’s doubt. And how he copes with that doubt over the series is going to determine who he is moving forward in the MCU.”

The premiere also featured a cameo from Rhodey aka War Machine (Don Cheadle), who raised some important questions for Sam about where the world is right now. According to director Kari Skogland, that relationship will be significant for Sam as he contemplates whether or not to reclaim the mantle of Captain America. 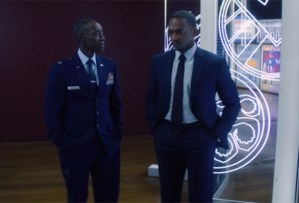 “It’s got a bit of a mentorship quality to it. It’s also very relevant to the story of Sam and the shield and what he’s going to decide,” Skogland explains. “Rhodey is posing the question, ‘Is there going to be a world where nobody carries the shield?’ Is that what this is, where allies become enemies and the world, post-Blip, has changed? During the Blip, obviously, there was a shared grief and you had a world that was cooperating in a different kind of way. Now you’re post-Blip and all of a sudden, people want it to go back the way it was. As [Sam is] pondering the idea of the shield and should he take it up or not, Rhodey presents even more reasons, both for and against.”

“There’s a shorthand that they have together,” head writer Spellman adds. “By them just pausing and being silent for a minute, the audience can fill in the blanks.”

We don’t yet know what exactly will bring Sam and Bucky together — they spend the first episode apart — and how the supervillain Zemo (Captain America: Civil War‘s Daniel Brühl) fits into all of it, but it’s clear that the Falcon and the Winter Soldier are operating in a world that looks very different from what they experienced in the Captain America and Avengers films. The premiere alludes to a growing tension with the rise of a violent extremist group known as the Flag-Smashers, and ends with the government christening a new Captain America who represents “real American values.”

These developments are “relevant to the Blip and the fact that enemies and allegiances have changed, and it’s all changed quite quickly,” Skogland explains. “We’re going to discover through the course of the next episodes just what that means.”

“We wanted the crisis that the heroes were dealing with to be something that every single fan could look at and be like, ‘Oh, I identify with that. That’s a very real crisis,’” Spellman notes. “We wanted these villains to be born from that crisis, and we wanted our heroes to be approaching them from a point of view that is so human and so anchored in modern struggle today, that this whole piece feels like the superhero franchise of the future. These heroes are of the times, they’re dealing with problems of the times, and their worldviews are of the times.”

What did you think of the Falcon and Winter Soldier premiere? Grade it and comment below!