Distance sure can make the heart grow fonder, but it also has the power to smother a flame.

In the first of two Unicorn episodes that aired Thursday, Wade still had a picture of Shannon as his cell phone wallpaper despite the couple having called it quits due to the distance between them. Even watching the super-violent John Wick reminds him of his ex. Wade is down in the dumps, and not even Keanu Reeves’ badassery can raise his spirits or even distract him.

At the start of the finale, it’s a month later and Wade is struggling to move on, despite massive encouragement and support from his besties. Feeling like he’s still not ready, Wade asks Delia and Forrest to be his dates for the hotel’s grand opening. Ben and Michelle, however, lightly suggest he get a real date. “Lord knows you have options. Women are always hitting on you, it’s disgusting!” says Michelle.

As everyone tries to convince Wade it’s time to move on, his phone dings and it’s a text from Shannon… only she mistakenly texts him when she’s trying to contact some new dude. It’s a real punch to the gut for Wade, but it does give him the green light he needs to restart his dating life.

The guys hit a bar to help Wade move on, and after some gentle nudging, Wade runs into Caroline, the woman from his widows group. The two start chatting about the changes happening in their lives, and after Wade plays it smooth by quoting Jack Kerouac, Caroline immediately kisses him. The former lovers duck out to get, uhh, reacquainted. 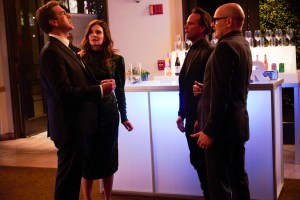 Trey offers Ben and Wade the chance to earn “buttloads of money” on a new golf resort deal he’s cooking up, and Ben and Wade jump at the chance for another high-paying gig.

At the hotel event, Wade chats up the bartender, Lena (Runaways‘ Brittany Ishibashi), until Trey cuts in to introduce his fiancée: Caroline. The tension is thick as Wade’s sometime fling spills the beans to Trey, who reacts by clocking Wade in the face. Like the solid friend that he is, Ben returns a punch to his probably-now-ex-boss, causing the rest of the group to grab their coats and high-tail it for the door.

While they wait for Forrest to get the car, Delia tells Wade that Jill would be so proud of him. She relays a story of when Jill was sick and being cared for by a voluptuous hospice nurse; Jill told Delia that after she was gone, she hoped Wade would “hit that.” Delia wishes she shared more of Jill’s adventurous spirit, as she and Wade share a tender moment.

In the season’s (maybe the series‘?) final moments, Lena follows the group outside to give Wade her number, just as Caroline appears. Caroline is peeved that she just blew up her engagement, only to find Wade hitting on the bartender. With both women staring him in the face, he laughs and exclaims, “I… have no idea what I’m going to do!” before telling the women they’re both “so awesome.” Just as he’s about to get in the car, Shannon texts again. She couldn’t go through with her date, and it seems she’s not quite over Wade just yet.

“My life is insane!” Wade cries out with a smile plastered on his face. Michelle was right. This unicorn really does have a lot of prospects!

Will things work out between Wade and Shannon, or does his future lie elsewhere? Grade the finale (and season) below, then drop some Comments!