For three years, grown-ish fans have wondered if Zoey and Aaron would ever move beyond the friend zone and become a couple.

Of course, last week’s installment showed the pair as friends with, um, benefits, but that was problematic because Aaron has a girlfriend named Rochelle. Remember her? In fact, Rochelle reached out to Zoey to tell her she no longer wanted Zoey to leave Aaron alone, and they could all be friends. This made Zoey feel remorseful because she had slept with Aaron. Meanwhile, Aaron dissed Zoey when he told her she was, “the girl who floats in and out of my life whenever she wants, and just kind of screws with my head.” But Zoey said she would no longer be floating, and had actually quit her job as Joey Badass’ stylist to return to school. 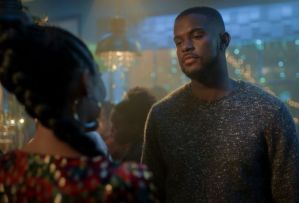 Thankfully, much of this got resolved on Thursday’s Season 3 finale, titled “Who Do You Love?” The episode kicked off with Aaron still fighting the power. Instead of taking Cal U’s bribe of paid-off tuition debts in exchange for his silence about the college’s investment in private prisons, Aaron staged yet another brilliant protest in orange prison jumpsuits. And this one garnered even more attention because it took place at his commencement with all of his fellow graduates — Black, white, brown and Asian — standing up against the school’s greedy and systemically racist venture.

Instead of feeling proud of not only graduating from college but staging an effective and non-violent protest, all Aaron could think about was Zoey and Rochelle and who he should choose. Hoping for clarity, Aaron went to his boys Doug and Vivek, but they didn’t help. “I would imagine she’s a very selfish lover,” Vivek opined. But Aaron said Zoey is anything but. “I would have imagined that, too. But she’s not,” he retorted. See? This is how Zoey and Ana should’ve discussed Aaron last week, but whatever.

Soon after, Rochelle broke the exciting news regarding the university’s divestment and grabbed Aaron for a congratulatory kiss. Zoey and Aaron attempted to talk, but then Vivek interrupted, causing Zoey to sulk off in her fabulous patterned dress and braided ponytail. Zoey returned home and found Luca sitting on her couch because he had been helping Nomi with her baby. He was also making a vision board, which he comically refused to call a “vision board.” 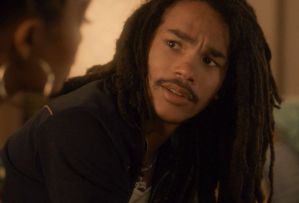 At first, Luca seemed indifferent about Zoey revealing that  she and Aaron had slept together. They used to be a couple, too. Instead, Luca said, Zoey and Aaron deserve each other. There’s the petty. Respect the petty. Later, after Jazz and Doug got home and Doug drunkenly embarrassed himself, Zoey asked Luca what he meant by his comment. “The entire year we were dating, I asked you if you had feelings for homeboy,” Luca replied, “and you said ‘no.'” But Zoey stood by her past declaration and said she didn’t have feelings for Aaron then. Really, Zoey? Really?

Luca was likely right, because soon after Luca left, Zoey texted Aaron and asked if he was up. They met in front of his dorm building, and Zoey apologized. “Sorry for everything,” she said. “For going back and forth with you all these years.” Zoey also said she was sorry for blemishing their beautiful friendship. But Aaron said they are grownups who both messed up. Determined to take a stand, Zoey told Aaron that although she loves him and is in love with him, she was going to remove herself from the equation so he could be with Rochelle. She added that perhaps they could be a couple in the future when they were both free to do so without guilt.

Zoey drove home, and that seemed like the end for her and Aaron… until he showed up at her place. “I want our story to start now,” Aaron said. “Like, right now.” Aaron also said he loved Zoey. The two kissed passionately and then smiled. Awww! So sweet. But what’s going to happen to Rochelle now? Hopefully, all will be revealed in Season 4.

Give the grown-ish finale a grade in our poll, and then hit the comments to share your thoughts.