Like WandaVision before it, Disney+’s The Falcon and the Winter Soldier serves up Marvel-ous set pieces while also being afforded the time to delve deep into the characters’ mindsets.

Only the first episode, premiering Friday, March 19, was screened for critics, but its 47-minute running time nonetheless promises feature film-caliber action sequences, as well as some much-needed, overdue insight into the MCU’s Sam Wilson aka Falcon (played by Anthony Mackie) and hero-turned-assassin-turned-hero James “Bucky” Barnes aka the Winter Soldier (Sebastian Stan).

Falcon and Winter Soldier: A Recap of Their Big-Screen MCU Backstory 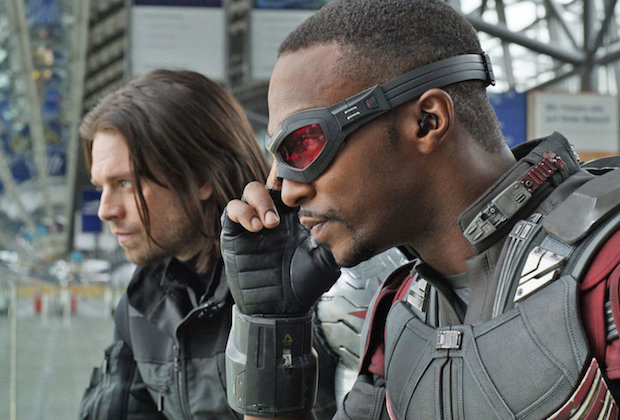 You’ve seen glimpses of the high-flying chase that kicks off the series, as Falcon (with key assists from his nifty drone Redwing) navigates Tunisian air space in pursuit of an HVT; in its totality, it is a breathless piece of filmmaking that would wow the crowd at your local, sadly defunct Cineplex. The physical confidence exhibited by Sam in that set piece, followed by the fun banter between him and a government handler, quickly cements Mackie’s upgrade from sidekick to lead hero.

Stan gets a smaller action-hero showcase in the premiere, though that flashback of sorts lays the groundwork for when we first see Bucky in the current timeline, stonewalling a therapist by making light of the “three rules” he must abide by as part of his pardon. Being a ruthless HYDRA assassin clearly does a number on the ol’ psyche (as does “running from war to war for 90 years”), so Bucky in the months since the Blip/Avengers: Endgame has assigned himself a regimented penance, which when it is revealed will surely break your heart.

Speaking of the five-year Blip and Sam’s absence during it: the repercussions threaten to upend the life of his sister Sarah (Adepero Oguye) and her two sons, back home in Delacroix, La. The brother/sister scenes that result from that crisis are warm, small, and speak to issues that are far more human than when Sam is off battling “armies and monsters.”

But Sam also has superheroic decisions to make, given that Steve Rogers handed him Captain America’s mighty shield at the end of Endgame. Since the Blip, “The world is broken, waiting for somebody to fix it,” Colonel “Rhodey” Rhodes (Don Cheadle) notes at a D.C. ceremony honoring Steve’s legacy. But Sam has to wonder: Is he the best person to inherit Cap’s mantle?

Save for some brief teases of what is at least the series’ introductory threat — a rising faction known as the Flag-Smashers — and a final moment that raises big questions  about Sam’s heroic future, that is about all the first episode covers. But if Disney+’s second Marvel series stays on track, it will be as well-received as WandaVision, even if it is a more traditional Avengers offshoot.

THE TVLINE BOTTOM LINE: The Falcon and the Winter Soldier, at first blush, look like a winning pair.