Spoiler alert: We’re about to reveal the winner of RuPaul’s Drag Race UK Season 2. Haven’t watched? Sashay over to WOW Presents Plus!

Bimini Bon-Boulash, Ellie Diamond, Lawrence Chaney and Tayce were tasked with giving the most “drag-tastic” performance of their lives, composing and delivering their own solo verses to RuPaul’s “A Little Bit of Love” while nailing “the most challenging choreography of the season.”

The final four queens were also invited to the traditional Tic-Tac lunch with Ru and Michelle Visage — all tea, hold the crumpets. Among the most interesting nuggets dropped, we learned that Tayce’s dad was a bass player in Wham!, Ellie first knew that she wanted to become a drag superstar when she saw Adore Delano in Drag Race Season 6, Lawrence does a solid impression of Austin Powers‘ Fat Bastard (which would have been an amazing Snatch Game character!), and Bimini was originally going to be a journalist before deciding to pursue drag.

Despite Ru’s dire warning, the queens managed to survive the choreography, even if a few of them definitely struggled with their props. (As Alan Carr told Lawrence, “I’ve seen milk turn quicker with some of those moves.”) Bimini transformed into a glorious Britney-Madonna hybrid, complete with tongue-in-cheek lyrics; Ellie gave off Kinky Boots vibes in a red-on-red-on-red ensemble; Tayce reminded everyone why she’s this season’s lip sync assassin; and despite struggling with the dancing, Lawrence’s undeniable personality remained on full display throughout. 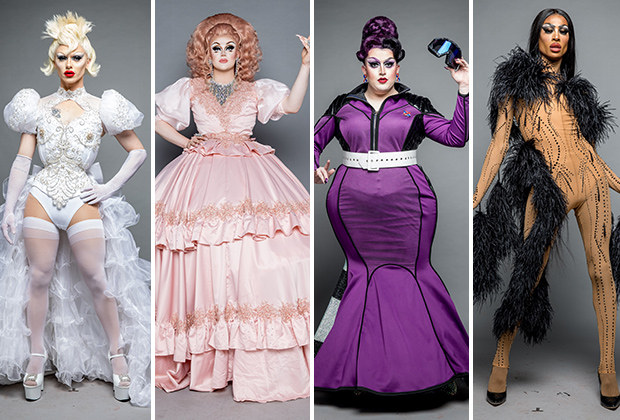 Following a quick werkroom kiki with the eliminated contestants, the final four returned to the main stage, where Ellie was immediately sent packing as this season’s fourth-place queen. “You are adored, but this is not your time,” Ru told her. Ellie is grateful for the memories, but of course she admitted to being “gutted.”

This left Bimini, Lawrence and Tayce to compete in a three-way lip sync battle to the tune of Elton John’s “I’m Still Standing.” And when all was said and done, the only queen left standing was… Lawrence Chaney!

“Listen, I’ve said a lot of things this season, so I’m going to keep it short and swift,” Lawrence said, bejeweled scepter in hand. “Who’s ready for the purple reign?!”

Your thoughts on the second-ever winner of RuPaul’s Drag Race UK? Vote for the queen you would have crowned below, then drop a comment with your overall thoughts on Season 2.