Most of us have seen the picture. You know, the one where a college-aged Dwayne “The Rock” Johnson sports a black turtleneck, herringbone chain, baggy jeans and a fanny pack in the most ’90s centric photo ever? 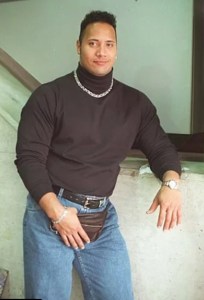 Well, in the March 16 episode of Young Rock, Johnson and the NBC sitcom’s producers, cast and crew helped not only recreate the ensemble for the oldest of the Young Rocks (played by Marco Polo‘s Uli Latukefu) to wear, but flesh out the world in which he wore it. This was back in the day when Johnson was a freshman defensive lineman on the come up at the University of Miami.

Johnson had performed so well on the field that he caught the attention of NFL star/university alum Michael Irvin and rabid fans/donors such as Luther “Uncle Luke” Campbell. (The latter was so impressed with Johnson that he invited him to one of his exclusive South Beach parties.) But then the unthinkable happened. The college athlete badly injured one of his shoulders in the final practice before the start of the season, sending him to the bench — and on a downward spiral of situational depression as he recovered.

“We all have our hearts set on things, and then if they don’t work out we can lose ourselves. That’s sort of what Dwayne goes through at that point in time when he gets injured in college,” Latukefu tells TVLine. “And then it’s him trying to navigate his way and find out what’s next, and working his way toward that.”

In recreating that moment in time, the Sydney, Australia native says he didn’t want to mime Johnson but epitomize the familiar parts of the action star and former wrestler in his own way.

“Obviously you’ve seen what happens with the fanny pack and turtleneck coming out…,” Latukefu says with a chuckle, because of the uncool way in which his Rock rocked that look. “So, I looked at the photo for inspiration.”

“But I think the most exciting thing for audiences is the context of the photo,” he adds. “For me, the prep was going through as much old football footage as I could. Dwayne and I also had a Zoom meeting where I asked him some personal questions relating to that period in his life. That was really the anchor for me throughout the whole show.”

“I listened a lot and picked parts of what I wanted to incorporate at that stage of who Dwayne was,” he says. “Obviously, if you look back at some earlier footage, you can hear how his speech has developed and changed over the years. For me it was good to pin down a few of those things and not try and cram everything into one season. I picked out a few things that came naturally and easily that the audience might recognize, and that was it.”

More than anything, Latukefu wanted to tap into Johnson’s deep sadness in those moments, so that fans could better understand some of his lowest lows at that age.

“The immediate image that the audience has of who Dwayne is, is how we see him now,” Latukefu says. “I really tried to peel back the layers and get to the heart and soul of Dwayne, and what it’s like to have your dreams shattered. And also the hardships and the pressure of his family. They moved to Tampa to be closer to him, so there’s that big sense of responsibility on his shoulders. That all came into play, all within in a half-hour comedy.” 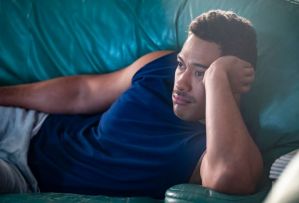 In one scene, the mature-looking teenager is shown vegetating on a couch at his parents’ place, eating and zoning out day and night while the blue light of the TV washed over him. Sobering and revealing, the dialogue-free montage allowed Latukefu to really utilize his facial expressions and physicality to tell a story of hopelessness.

“That was the hardest thing to do because that scene was the first that we started to shoot of my period of time as Dwayne,” Latukefu reveals. “I was like, ‘Are we shooting a comedy here?’ But I think my favorite part about that is most people have gone through some sort of dip in life by that age, especially now with the pandemic because we’re still in it.” 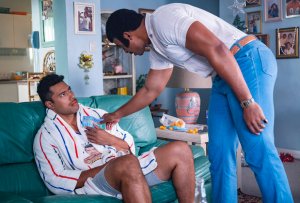 The episode also showed that for mild cases of malaise, there is a way out. In Johnson’s case, he had a heart-to-heart with his father Rocky (played on the show by Joseph Lee Anderson) and hit the gym until he was strong enough, mentally and physically, to play again.

“That’s such a truthful experience for a lot of us, and that was something I really tried to stay truthful to throughout that period,” Latukefu says. “I’ve had my fair share of eating my way through some tough times as well — ice cream is my favorite — and while I wouldn’t let myself hang there too long, Dwayne was fresh out of high school and coming into a college team with the most storied reputation of that time. There was a lot of pressure. I’m glad he came through it, and I hope that I was able to capture that genuinely.”