Kevin Atwater’s love life on Chicago P.D. has been tragic, to say the least. He’s only had one real romantic interest over the course of the NBC drama’s eight seasons so far, and that did not end well.

In the Season 6 episode “Black and Blue,” Atwater shared a brief romance with Laila (Milauna Jemai Jackson), a wholly likable woman with a criminal past. Their chemistry was off the charts, and it looked like the pair had the potential for a long-term relationship. However, things fell apart when Laila was charged with murder despite covering for Kevin when he was close to being caught while undercover. Though it was the District Attorney’s decision, Laila saw this as a huge betrayal and a failure on Kevin’s part to protect her. The episode ended with Laila verbally berating Atwater before heading off to jail, closing the book on their romance.

Atwater has remained single since then, only enjoying some light flirting with rookie cop Vanessa Rojas (Lisseth Chavez) before she exited the series at the end of last season. LaRoyce Hawkins, who plays Atwater, says the Intelligence detective has learned a lot from his past mistakes. 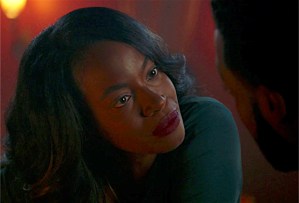 “I think Atwater would be guilty of not having certain love skills as highly developed as they should have been,” Hawkins tells TVLine. “I think about that episode [with Laila] all the time. I actually just watched it not that long ago [and wondered] what could Atwater have done differently to preserve that rhythm to keep her safer, or at least for her to feel more protected by him. By the end of the episode, she’s going off, and doesn’t even trust Atwater or respect Atwater as much as she does at the beginning because of how he handled things. He lost his brothers and sisters because of a job that he didn’t know how to stand up to, and perhaps he lost the only love of his life that we have reference of because of a job he didn’t know how to stand up to.”

Given the experience, Hawkins assures that Atwater will make a stronger romantic effort if the opportunity presents itself again. “I’m pretty sure the next time Atwater finds himself in a romance, he’s gonna do his best. But he’s also going to require a lot of patience and understanding because, you know, he might be a little jacked up,” he explains.

While we don’t know when Atwater’s next romance will come, you can probably rule out his best friend Burgess as a potential match.

“That would be unfortunate if that happened, because she’s the best friend that almost married his best friend. With Ruzek and Burgess being his best white friends, it’s hard to say that Atwater would find a way to infiltrate or intercept that love,” he adds. “But this is television, and anything can happen.”