The Flash wrapped its pandemic-interrupted Mirrorverse arc this Tuesday night. What (or who) did it take to thwart Eva’s plan to create a new, better world for the Mirror Monarch’s “children”?

After Cisco, Frost and Allegra all came to and made nice with a back-to-normal Barry, all they could do was let Iris rest and recover from the distorted neural pathways she suffered after being yanked from the Mirrorverse. As for getting his speed back, Barry rules out the ASF considering what it did to him the last time.

Meanwhile at the CCPD, calls are pouring in from  all over, from people  reporting that loved ones aren’t acting like themselves. Joe is meeting with Sue Dearbon’s worried parents when a patrolman urgently pulls him aside, then peels off a mask to reveal herself as Sue! Sue says that the people in Joe’s office are not her parents, which Joe says jibes with everything else that is going on.

Cisco updates Team Flash on the “invasion”  happening downtown, and gets the idea  to order a citywide blackout, so as to cut down on the reflective surfaces through which Eva can travel. As  Barry puzzles over a way to save Iris and everyone else, Eva pulls him into the Mirrorverse, for a speech about how humanity is failing this planet, and how she and her “children” will do better.  She tells Barry that the best thing he can do is lead the Flash’s faithful followers into the Mirrorverse where they’ll be perfectly happy (except for, I guess, the whole insanity thing!). Barry returns to the team at STAR Labs to report that Eva said they “can’t win — and she is right.” 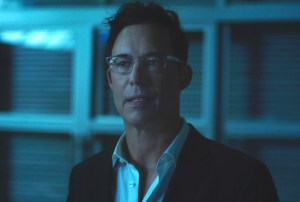 Barry goes to mope in the lounge when who materlizes before him but the OG Harrison Wells!  Long theory, short: When Nash gave his and the others Wellses’ lives to power the ASF, “0.01 percent” of their multiversal  particles were left behind, to recreate Harrison. (Nature likes a balance and all.) Barry is allowed a moment to slightly geek out over finally meeting the one Wells he always wanted to  meet, while Harrison explains there he has been imprinted by the people the assorted Wellses met during their respective lives. (As such, he understands the attachment Allegra feels when she sees, rushes up to and hugs him, etc.)

Harrison offers to help Barry with his speed problem, by noting that if he is “the Paragon of Love,” he is thus the once-in-a-lifetime hero who can save the world with his heart. “Run, Barry, run… toward love,” says Harrison. Barry darts to Iris’ bedside, where he observes the literal “spark” between them that we’ve seen a couple of times  before.

Barry theorizes that Iris is the key, that a piece of the OG speed force resides within her. So later, when Iris is able to, she walks over to the fusion sphere and powers it, chanting  to Barry, “We need you….” And then, “I need you.” Soon enough, the lab is crack-alackling with lightning, and Barry is up and running again. (Was it me, or did Harrison appear to see and  nod to someone we didn’t see during the lightning-filled sequence…? Odd.)

Barry speeds into town and starts saving people from Eva’s plan. When Cisco and Frost show up to provide backup, Eva clones herself into some minions, and a meh group fight ensues. Back at STAR Labs, Allegra wonders, “Every Big Bad has a weakness. What’d we miss?” Iris realizes that Barry needs  more than speed to win this fight, so she portals over  to face off against Eva herself, using her own apparent mirror powers to defect a  shower of glass shards. Barry and Iris  hit Eva with one heavy pep talk,  saying that her way of creating  a “better world” full of “peace” clearly isn’t exactly working, given the number of cars being set on fire by her goons. Eva realizes the error of her world-bettering ways and powers down/shatters her minions  — with a helpful power boost from Barry and Iris. In turn, Singh, Kamilla (who promptly phones Cisco to trade ILYs), Cecile and anyone else who had been pulled in the Mirrorverse are returned.

Debriefing afterward at STAR Labs, Chester confirms that Eva is nowhere  to be found/indeed slinked back to her Mirrorverse… Iris suspects that she lost her own mirror powers when Eva left… Sue and a bandaged/voice-modulated Ralph bid everyone adieu, to hunt down Black Hole-like organizations all over the world (holy clunky exit!)… and  Allegra (because why not?) and Cisco say their own goodbyes to the Wellses, via Harrison.

Harrison explains how he is able to travel through time to any moment in any Wells’ life, and he’ll be damned if he isn’t going to live his four years with ill-fated wife Tess over and over again. And with a flourish, he demonstrates for Cisco how it is he travels through time, with a nifty dematerialization.

Then, in a bonus scene, we rewind to “18 Hours Earlier,” when the speed force was charged back up — and we realize that in doing so, a veritable rainbow of lightning bolts shot up, into and across the dark sky, forking all over. (Quentin on my Twitter feed says this could be teasing a comic book arc in which a “speed force storm” spawns Godspeed as well as some  other speedsters, who ultimately train at STAR Labs. Or, as has also been suggested, have the Sage, Strength and Still Forces been unleashed? )

What did you think of the Mirrorverse finale?