Superman & Lois felt a lot more like Superman or Lois on Tuesday, as Clark once again struggled to fulfill his duties as a husband, father and, you know, superhero.

Clark’s latest Choose Your Own Adventure began when his pesky father-in-law (the worst!) requested that he accompany a dangerous criminal to a new prison facility. But because the Smallville High School football team would be nothing without its new assistant coach, Clark politely declined, choosing practice over protection. And wouldn’t you know it, the darn criminal — who happened to be Thaddeus Killgrave, a psychopath radicalized by his hatred for Superman — escaped in transit, with Clark arriving just in time to survey the wreckage.

Clark’s second fail of the week came when he promised to join Lois at the town hall meeting, where he was supposed to leverage his reputation as Smallville’s favorite son to sway his neighbors’ votes against Morgan Edge gaining control of the mines. And even though Lois understood that Clark missed it because Thaddeus wasn’t going to catch himself, she had to admit, “It feels like I’m really far down on your list of priorities.”

Thaddeus turned out to be kind of a pushover, but his final face-off with Clark couldn’t have happened at a worse time, as Jordan and Jonathan were simultaneously dealing with a crisis of their own. One of their football buddies appeared to be on the brink of a super-human outburst, only they waited to call their dad for help because Sam (again, the worst!) strongly suggested that they let Clark prioritize being Superman.

Everything turned out OK for the boys’ pal, whose metaphysical development was apparently triggered by an unknown material at the site of Jordan’s little bonfire mishap. In fact, he’s now enrolled at a special school for kids who share his “abilities.” (Future spinoff, anyone?) But things were definitely not OK between the Kents and Sam, who learned that he’ll no longer be welcome in their home if he keeps interfering with their parenting. (Between this confrontation and the words she exchanged with Morgan Edge at the mine, Lois did more butt-kicking this week than Superman. Love to see it.)

And while Clark was able to turn Lois’ frown upside down with a romantic candlelit dinner — and we mean, like, enough candles to burn that entire barn to the ground — his relationship with her father is on thin ice. Clearly beginning to rethink what Captain Luthor told him about Superman’s future, Sam officially began Project 7734, which he referred to as a “contingency plan.” 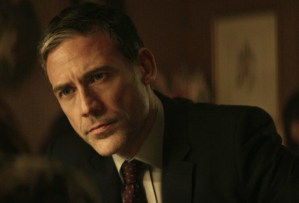 Meanwhile, like a handsome octopus with a perfectly genuine British accent, Morgan Edge continued to wrap his dirty tentacles around the good people of Smallville, this time setting his sights on a certain reverse mortgage expert. After learning that Lana works at one of his banks (“I understand you’re one of mine?”), the billionaire baddie insisted that Kyle bring his wife along to their post-game dinner, where he pelted her with questions about her ambitions.

Lana tried to explain that she “got into finance to help people” (excuse me?!), but Morgan inquired further, asking if she was truly “satisfied” with her small-town way of life. Kyle was, of course, completely oblivious to Morgan’s shameless flirtation, creating yet another wrinkle in his and Lana’s Shar-Pei of a marriage. Needless to say, Lana needed a drink.

In an hour full of twists and turns, the most surprising part of Tuesday’s episode might have actually been Lois and Lana’s thoroughly entertaining girls’ night out. It was refreshing to see two grown women on a TV show lifting each other up over drinks, especially Lana’s speech about how meeting Lois brought out the best in Clark. (Her “yes, we dated in high school” line had us worried for a second, we won’t lie.) And their evening of commiserating seemed to do the trick for Lana, who cozied up to her husband the next morning. (Is anyone else craving pancakes, preferably in the shape of dinosaurs?)

The episode ended with Leslie Larr helping Morgan punch through a hole in his newly acquired mine, which apparently contains “enough X-Kryptonite to resurrect an army.” So that answers Lois’ question about why Morgan is so interested in Smallville — he’s building an army of evil Kryptonian super-soldiers. NBD!

Your thoughts on this week’s Superman & Lois? Drop ’em in a comment below.