Sam Wilson and Bucky Barnes aren’t really friends or partners — they’re more like co-workers — but the dynamic pairing is about to embark on their most intimate journey yet. The Falcon and the Winter Soldier, premiering Friday, March 19 on Disney+, will see the superhero duo look inward while tackling a new threat that sends them across the globe.

In the wake of the events of Avengers: Endgame, in which Steve Rogers handed Sam the Cap’s shield, Sam (played by Anthony Mackie) has to decide whether or not he will take up the mantle of Captain America. It’s a heavy choice to make, one that will have the winged hero questioning what it means to be a Black superhero in a post-Rogers world itching for someone new to step up and fill the void.

For head writer Malcolm Spellman, who also executive-produced all six episodes, the Marvel series is an opportunity for fans to get to know the Air Force veteran on a deeper level. 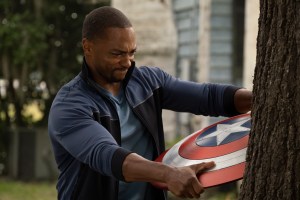 “There’s a long legacy of Black folk who come from [the same stock as Sam], and that informs his worldview,” Spellman tells TVLine. “When you see these unique scenes that he has confronting these villains, and you see him respond in a way that isn’t typical for a superhero, the audience now will have a deeper understanding as to how because they got to spend time in his personal life. We stole a lot of [Anthony Mackie’s] personal life for Sam.”

The Disney+ series will also explore what life looks like for Bucky (played by Sebastian Stan), who doesn’t really have his longtime friend to lean on and is struggling with the trauma of being a formerly brainwashed assassin forced to kill over the course of decades.

“Bucky showed up with more baggage than any hero in Marvel history, and we took all that baggage and distilled it down to a single storyline and a single character that he’s dealing with,” Spellman explains. “If he fails, he is the monster that he worries he might be. And if he succeeds, he’s reborn as someone that might actually be worthy of the shield and the praise that Steve used to get, and becoming a hero in his own right. Because in Bucky’s mind, he’s never been a hero.”

Stan adds that “Bucky is going to have to come out of his shell and learn to accept the past and move forward and get to know the world as it is. Who else could better introduce him to that than Sam Wilson?” 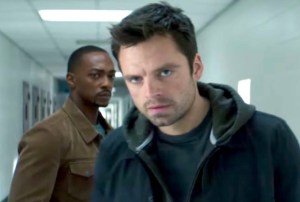 Bucky and Sam are polar opposites who don’t exactly get along — Bucky is a somewhat glum centenarian, while Sam is very much a man of this time — but they still share a few common threads, such as their friendship with Steve Rogers. According to Mackie, they’re also intelligent men with the sense to keep up with the changing times.

“Both characters, coming from where they came from and being the men that they are, realize that the world has changed and evolved,” Mackie says. “The Blip has put us in a position where we no longer are accessible to the way of thinking that was before. That’s what gave us Thanos. So both characters are smart enough to know that the future is different, and they’ve always been progressive enough to see that and move along with [it].”

Stan is looking forward to fans getting to know the Falcon and the Winter Soldier far better than they ever could in the Captain America and Avengers films, and to “spend a day in the life of Sam Wilson and Bucky Barnes as we haven’t seen… That actually ends up being much more relatable than all those epic times you’ve met them in the movies.”